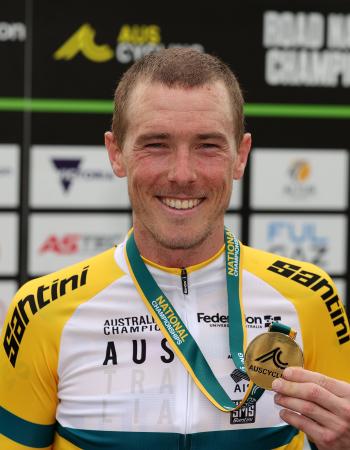 After a school talent identification program introduced him to cycling, Adelaide’s Rohan Dennis represented Australia at the 2007 UCI Juniors World Championships, where he placed 9th in the time trial – a hint of the success to come.

Initially, Dennis focused on track cycling. In 2010 and 2011, he claimed back-to-back world championships in the team pursuit before winning silver in that event at the London 2012 Olympic Games.

After turning professional on the road in 2013, the South Australian won consecutive world championships in the team time trial in 2014 and 2015.

Dennis claimed silver at the 2014 Commonwealth Games in the time trial, but 2015 was truly a standout year. He won his home UCI WorldTour race overall (the Santos Tour Down Under), set a new World Hour record (52.491km), then won the opening stage of the Tour de France.

2016 saw Dennis take the first of four elite time trial national titles before placing fifth at the Rio Olympics despite a mechanical issue.

After adding a swathe of professional victories to his palmares, in 2018 Dennis became the third Australian to wear the leader’s jerseys in all three Grand Tours.

He confirmed his status among the world’s best against the clock when he won the 2018 UCI Men Elite Time Trial World Championship in Innsbruck and successfully defended the rainbow jersey in Yorkshire in 2019.

At the Tokyo 2020 Olympics, Dennis earned his first Olympic medal in road cycling, taking bronze in the time trial.