Beneath the lights of the Adelaide SuperDrome, the nation’s best board-surfing-hand-slingers battled it out for the right to wear the hallowed green and gold of national champions. Adelaide inherited the 2021 AusCycling Elite Track Madison National Championships from the Austral Carnival in Victoria after some untimely COVID restrictions, and off the back of South Australia’s excellent track record holding events during COVID-19.

The home ground advantage of the Australian Cycling Team would make them the heavy favourites heading into the event and they all put on a show that won’t be soon forgotten.

Both Men’s and Women’s Madison entry lists were a veritable who’s-who of dominant riders from the Australian 2020/21 summer of cycling and former Madison medal winners.

Such well-balanced teams made for incredible racing.

The Women’s Madison was thrilling, with the final points gap hiding just how close every sprint was. On paper, Ash Ankudinoff and Alexandra Manly had a decent lead over Georgia Baker and Annette Edmondson, but an accumulation of inches won this race as much as points. Ankudinoff and Manly were imperiously consistent, only missing the top-3 in the first sprint of the night.

The tone was set early as the teams of Plouffe / Martin-Wallace, Manly / Ankudinoff, and Baker / Edmondson began their race-long slugfest. Those pairings dominated the early sprints, occupying the top-3 slots from start to podium presentations.

At half-distance, Baker / Edmondson and Manly / Ankudinoff were tied on 20 points apiece and began to push Plouffe / Martin-Wallace further in arrears. Those mid-distance sprints were some of the most aggressively fought as the top two pairs began to realise just how closely matched they were.

With 40 laps to go, Manly and Ankudinoff eeked out a slender 4-point lead over their rivals, but Sophie Edwards and Lauren Perry established themselves as consistent disruptors. Edwards / Perry sat comfortably in fourth place but regularly clawed into the top-3 in the sprints, which added pressure to the podium battle.

Two critical sprints late in the race fell to Ankudinoff but the margins were minuscule both times, and ultimately, the points gained on those would make for the crucial lead. Lauren Perry attacked with 3 laps to go and launched teammate Sophie Edwards to take the final sprint, with Alexandra Manly in hot pursuit taking second on the line and Edmondson third.

Ash Ankudinoff would leave the night having successfully defended her 2020 Elite Madison title, and Alexandra Manly improved on her silver medal in 2020. Baker and Edmondson took home a gritty second place and silver medal, while Alex Martin-Wallace and Maeve Plouffe fought hard for third.

Ash Ankudinoff: “We knew that coming into this race that we just had to be consistent, and be present in all the sprints and that was how we were going to win it. We made sure in the last 50 laps we made sure to put each other in strong positions so we could make the most of the opportunities to get those 5 points.”

Alex Manly: “It was nice to pair up with Ash, because in the past she’s beat me for the title. It was really nice to be able to do it together. By the time we came to the final sprint we were pretty stoked to have done it!” 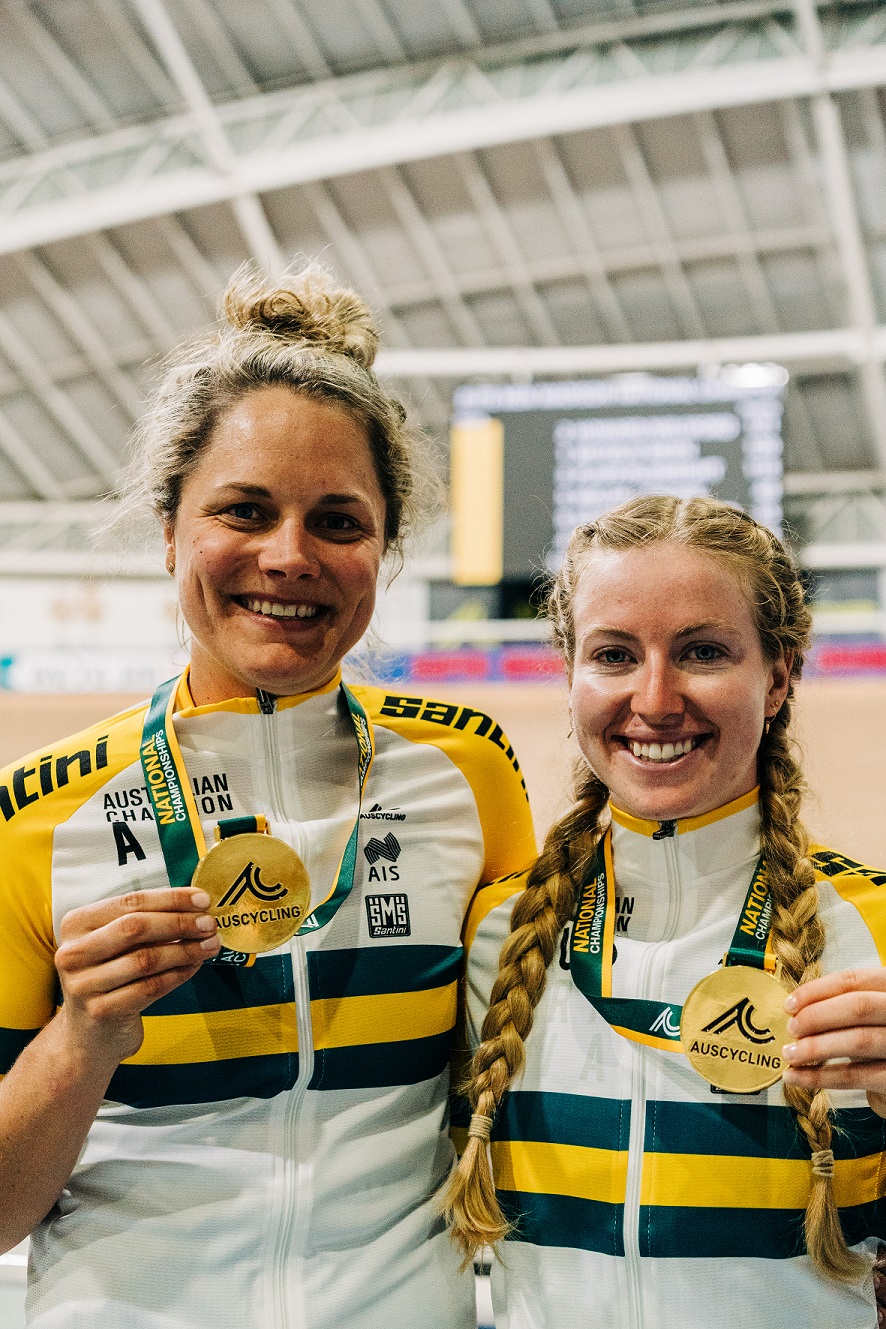 The Men’s race was one for the ages. Lengthy post-race deliberations eventually saw Leigh Howard and Sam Welsford winners by a single point (121) over Cam Meyer and Kell O’Brien (120), with Luke Plapp and Jensen Plowright two points back in third place (118).

The Australian Cycling Team members immediately emerged as the podium favourites. They began to dominate, with NRS mainstay Jensen Plowright riding exceptionally as the only non-track squad member in the podium chase. Plapp and Plowright dropped points early on but slowly closed the gap to Meyer / O’Brien as the race neared halfway. Plowright shone, putting in some well-timed jumps through heavy traffic to hit the line first and take some large points.

The leading trio of teams was buried among the following pack at mid-race, which added to the tactical intrigue. Liam Walsh / Declan Trezise and Cooper Sayers / Blake Agnoletto added some extra flavour to the sprints deep into the race and began to disrupt the leading three teams’ quest for maximum points. The final points tally was so tight that these pairings would end up making a sizable impact on the race.

The leading trio was cagily marking each other as fatigue was visibly taking its toll on the field. Only 7 points covered first to third, with Meyer / O’Brien incrementally edging ahead of Plapp / Plowright, swapping second place with Howard / Welsford.

A critical sprint at 20 laps to go saw Welsford win by a tyre-width over Plowright and reduce the gap to 2 points. But Plowright then slung Plapp, who buried himself to find a big stretch of empty boards and re-launch Plowright, who took the 10-lap sprint and a bag of points.

The leading teams dropped into the pack, which made the chasers eligible to challenge for the final sprint points, despite being laps down. Sayers / Agnoletto capitalised on the situation and were credited with first over the line and bagging the final points. Walsh / Trezise crossed second with Plowright third.

It took the Commissaires considerable time to dissect the final 10 laps and award Leigh Howard and Sam Welsford the win by a single point over Cam Meyer and Kell O’Brien. Luke Plapp and Jensen Plowright took home bronze, only 3 points behind gold.

Sam Welsford quotes “Gnarly race! I think everyone was still questioning the scoreboard at the end as you saw. We knew Plapp and Jensen were up the track and we knew we didn’t have to worry about the last sprint, just get around the pack and score a point to win on count-back. I just knew there was another lap so I had to keep going again. I think the best thing about it is that it could have gone either way in the top three teams so it just shows the depth we have in the Madison.”

Leigh Howard on competing with his Australian Cycling Teammates: “Sometimes it’s difficult when you’re competing against your own team mates but we all try and walk away happy with each other. It’s pretty easy to have arguments in races, and so far we’ve always walked away mates at the end of it and that’s far more important than any results.” 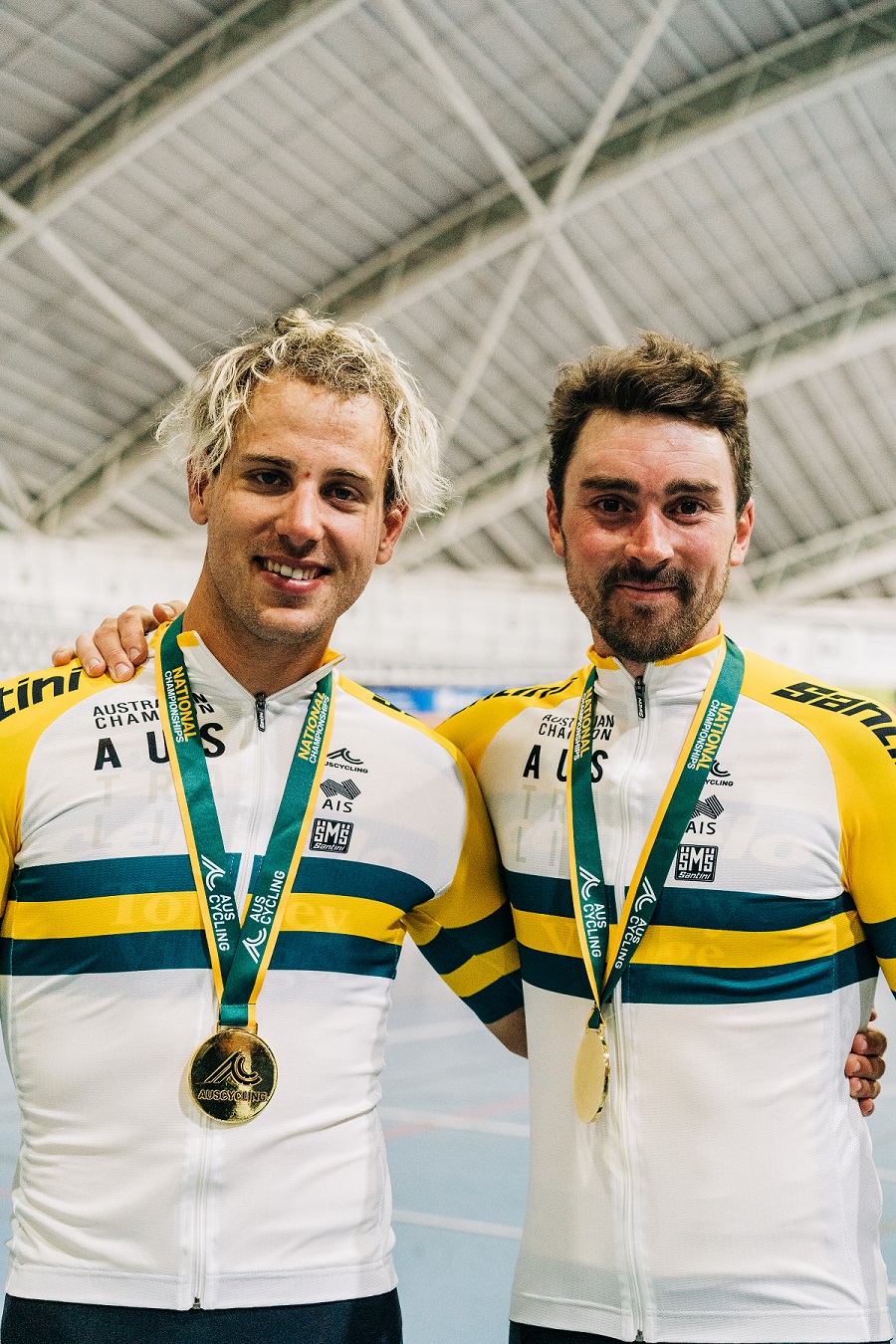