The Birmingham 2022 cycling program will conclude on Sunday with the men’s and women’s road race.

Australia will be aiming to defend both titles after Steele von Hoff and Chloe Hosking won gold medals in 2018.

Here’s what you need to know about tomorrow’s road race at the Commonwealth Games.

The Commonwealth Games road race will be run on a 16km circuit around Warwick, south-east of Birmingham.

The picturesque route will pass historic Warwick Castle, built by William the Conqueror nearly 1,000 years ago, as well as rural villages and green parklands along the River Avon. 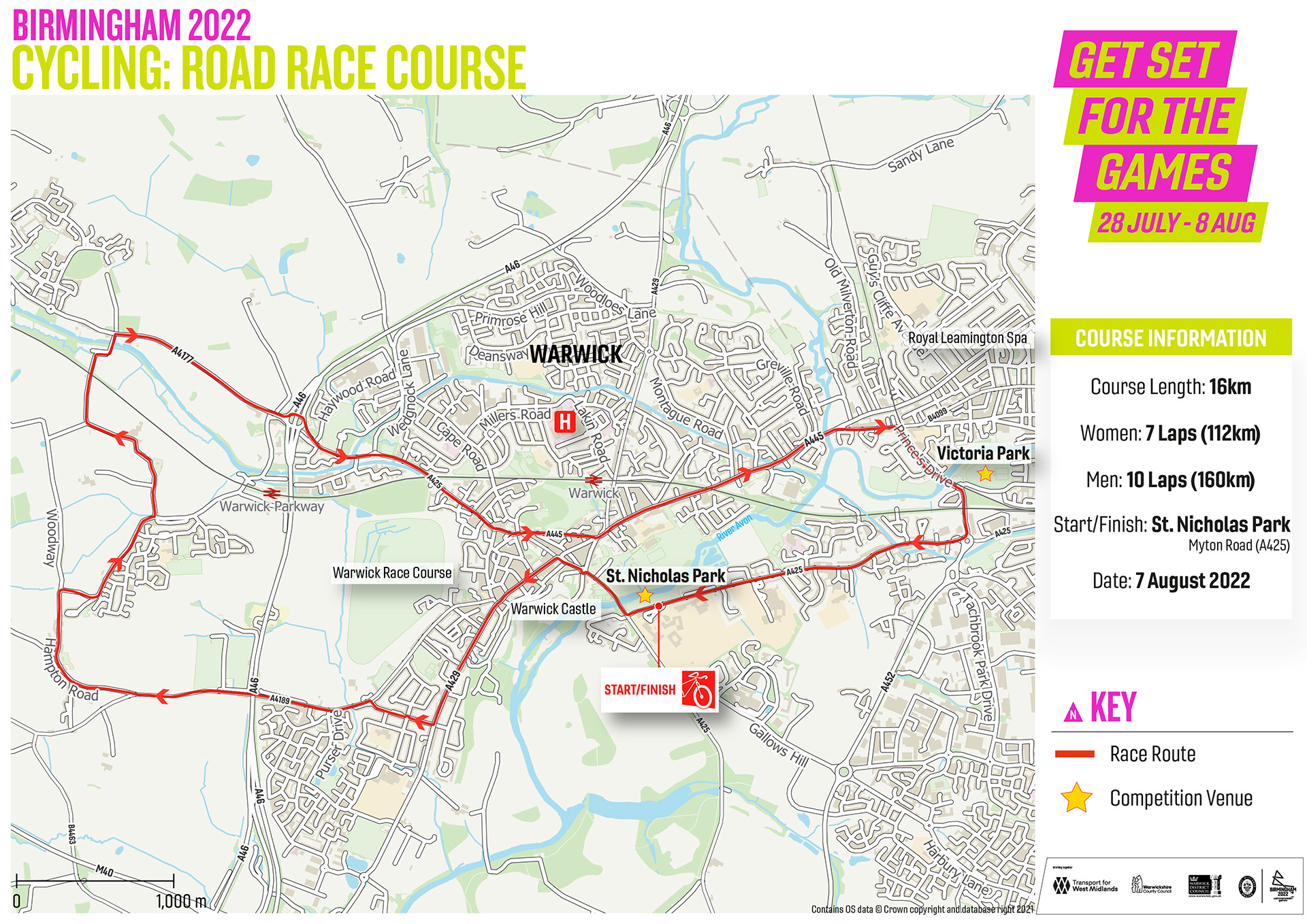 As far as the racing goes, it’s a flat course that should suit the sprinters – on paper, at least.

There’s just over 100 metres of elevation per lap, no major climbs to worry about, and the finish should be straightforward. The roads used are nice and wide, apart from a short section of country lanes far out from the finale.

With 3km to go, there’ll be a fight for position before a right-hander, followed by another right turn at a roundabout inside 2km. From there, it’s a virtually a straight shot to the finish.

If anyone wants to avoid a bunch sprint, it’ll be up to the riders – not the parcours – to make the race.

The Commonwealth Games road race will be contested by teams of up to six riders, though many nations will have far fewer entrants. It’s a rare opportunity to see riders from Great Britain representing their non-Olympic countries and territories, such as England, Wales and the Isle of Man.

Australia brings a well-rounded women's team with multiple cards to play in defence of gold.

Grace Brown is on stellar form after cruising to victory in Thursday’s individual time trial. She has the engine to go long and hold off a chasing group by herself.

Likewise, Brown’s trade teammate Brodie Chapman can hold a high effort all race long, whether to chase for others or to make her own bid for glory.

For their sprinting options, Australia will look to Alexandra Manly and Ruby Roseman-Gannon, who’ve flown in specifically for the road race after completing the inaugural Tour de France Femmes. In particular, Manly has enjoyed a standout season on the road, winning almost at will at the Lotto Thuringen Tour in May.

Finally, Sarah Roy and points race gold medallist Georgia Baker will be ending their long Games campaigns after competing on the track and in the time trial. Both are versatile riders who can threaten in a reduced sprint, or be called reliably in the service of others.

Brown said she would look for opportunities to attack depending on how the race plays out.

“We’ve got a pretty talented team for the road race and we’ve got a few different options,” Brown said.

“We can aim for the sprint; there’s also some girls that can attack and go for a solo win.

“It’s not a course that has a deciding point in it. It will really depend on how aggressively it’s raced, what the intent of other teams is, and we just have to play our cards.”

While the final start list hasn’t yet been published, most teams won’t want it to end in a bunch sprint. Canada may look to set up Alison Jackson or Leah Kirchmann, and England may ride for Alice Barnes, but surely the other nations will fear bringing Manly and Roseman-Gannon to the line.

Therefore, expect them to put pressure on Australia by sending riders up the road.

Australia will have to beware rivals such as Ashleigh Moolman-Pasio (South Africa), Elynor Backstedt (Wales), Anna Henderson and Joscelin Lowden (England) and any of the New Zealand team, including Niamh Fisher-Black and Georgia Williams, who will likely try to go on the attack to deny Australia an 11th cycling gold medal at these Games.

With Ewan, Australia would’ve had an obvious strategy: deliver one of the world’s fastest sprinters into the final 200 metres.

Without him, the team has three outstanding time triallists – Luke Durbridge, Lucas Plapp, and Rohan Dennis, who won the ITT on Thursday; a strong rouleur in Miles Scotson; and an unknown quantity in young mountain bike rider Sam Fox, who’s not raced at this level before.

Instead of controlling the race, we’d expect the Aussies to ride opportunistically, looking to make a decisive selection.

In any bunch sprint, Mark Cavendish will be the out-and-out favourite. The proud Manxman has the rare chance to win in the Isle of Man jersey, but surely all the other teams will strive to eliminate him.

Cavendish will likely be forced to track threatening moves by himself, but he also has a strong teammate in Ben Swift who could take the win for himself.

Both races, then, have all the makings of an unpredictable, attack-filled classic as the nations do their best to gang up and weaken the pre-race favourites. Don’t be surprised if we see a small group contesting the finish.

In Australia, you can watch the road races live on 7plus.

The women’s race starts at 5:00pm AEST on Sunday, while the men’s race is scheduled to begin at 9:30pm AEST.