Time trial, Mt Lofty, but a surprise absence: 2023 Tour Down Under route

The Santos Tour Down Under will return with a new look next January, featuring an individual time trial and an ascent of Mount Lofty – but fans will miss out on the iconic finish up Old Willunga Hill.

Today, organisers announced the route for the 2023 men’s race, which will span six days and 700 kilometres from January 17–22.

The race will begin with a 5.5-kilometre prologue around Adelaide’s Riverbank. It’ll be the first individual time trial in the race’s 24-year history and a chance for the overall contenders to make early time gains.

The opening road stage is expected to end in a bunch sprint in Tanunda in the Barossa Valley, before stage 2 sees beachside Brighton host its first stage start ahead of a finish in Victor Harbor.

Stage 3 features a ‘greatest hits’ of beloved climbs, with Norton Summit, Corkscrew Road and Checker Hill all on the menu.

No Willunga Hill, but a new summit finale

The name ‘Willunga’ is synonymous with the race, and stage 4 will, indeed, finish there – but, in a break from tradition, not at the top of Old Willunga Hill. Instead, the stage will start from Port Willunga (not McLaren Vale – another change) and finish with a sprint in the township of Willunga itself, at the foot of the hill.

No doubt some will bemoan the loss of the familiar finish. South Australia’s most famous climb has become the site of pilgrimage for many cycling fans, who line Old Willunga to wait for the decisive attack (usually by Richie Porte) of the week-long race.

Instead, the hilltop grand finale has been moved to Mount Lofty on stage 5, which could well become a new icon of the race. Its summit lookout commands postcard views over Adelaide, but this will be the first time the Tour Down Under ascends Mount Lofty.

Before getting there, the peloton will have to negotiate four tricky circuits around Crafers in what’s likely to be the most critical day for the general classification.

In the words of Stuart O’Grady

It’s clear that since Stuart O’Grady OAM took over the race director’s role in 2020, he hasn’t been afraid to shake things up, supported by new assistant race directors Annette Edmondson and Carlee Taylor.

O’Grady said the race would challenge the peloton in its return to UCI WorldTour status for the first time since 2020.

“The EFEX Prologue around Adelaide’s Riverbank is an event first, taking place on a loop around the Torrens with each rider beginning on the Riverbank bridge and tackling the course individually,” O’Grady said.

“It’s man versus clock in this all-out effort.

“More event firsts include a formidable Mount Lofty finisher and a stunning beachside stage start at Brighton. All the race routes showcase South Australia at its very best.”

2023 Santos Tour Down Under men’s stages

The city-centre criterium is a curtain-raiser to the stage race, and a chance for fans to get close to the high-speed action of bike racing.

It will be raced along Flinders, Wakefield and Pulteney streets and beside the Tour Village in Victoria Square/Tarntanyangga. 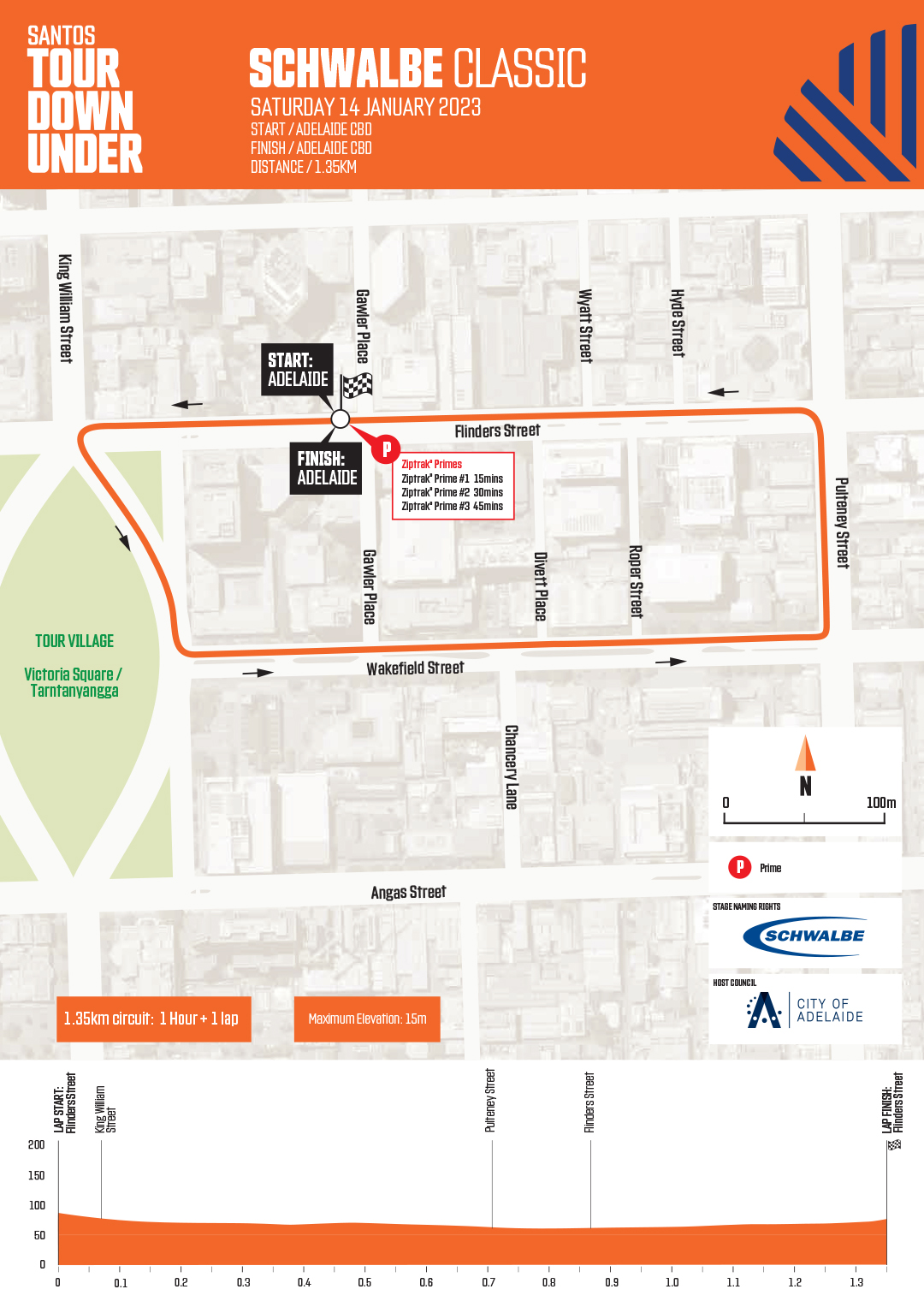 An individual time trial is the first for this race. Each rider will begin on the Riverbank bridge and tackle a city route that’s easy for fans. In a race often decided on bonus seconds, expect the protagonists to fight for every time gain.

It’s short enough that every rider can give maximum effort with the hope of securing the first ochre jersey and UCI WorldTour stage win of 2023. 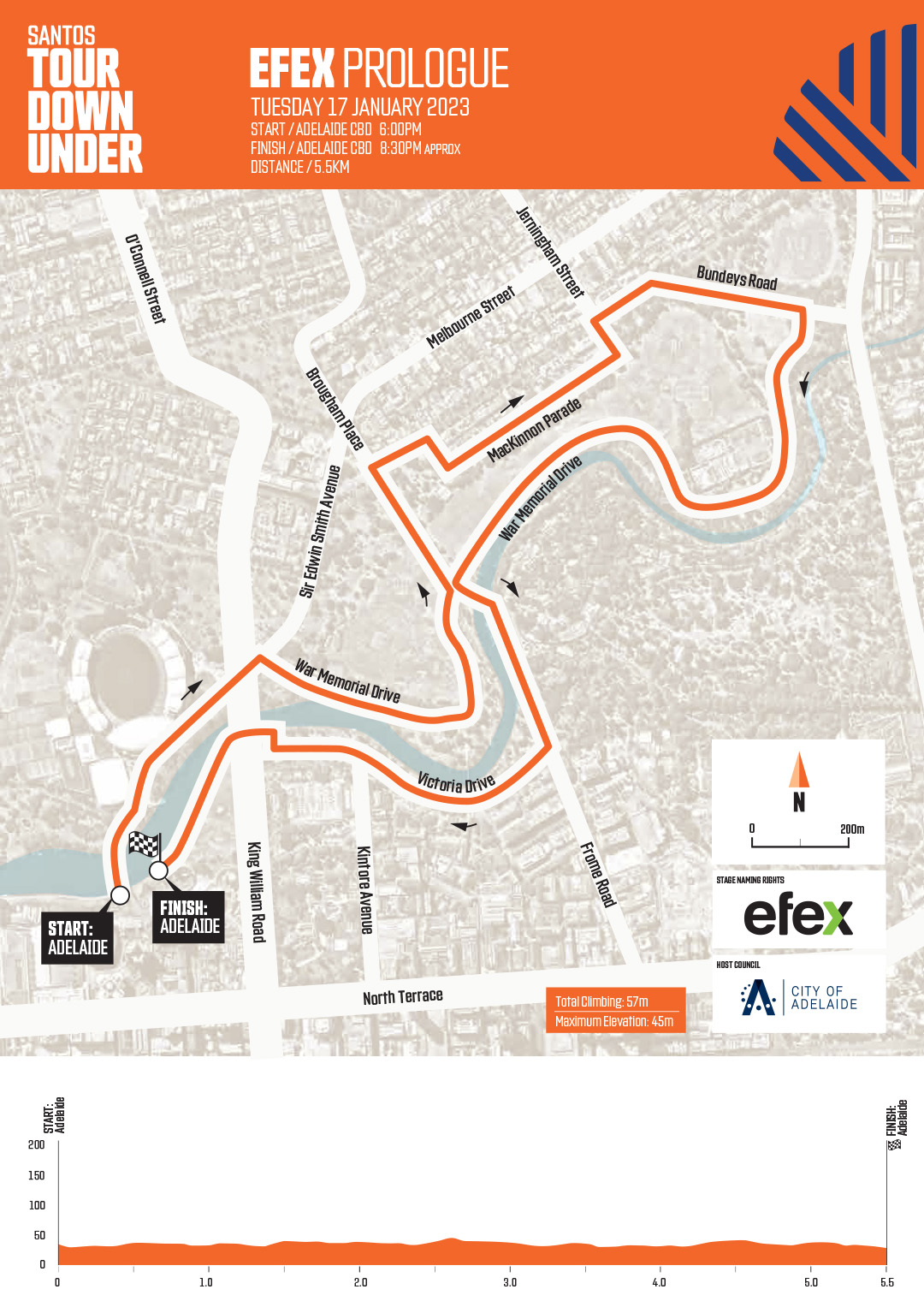 Expect a sprint finish in the first road stage of 2023. 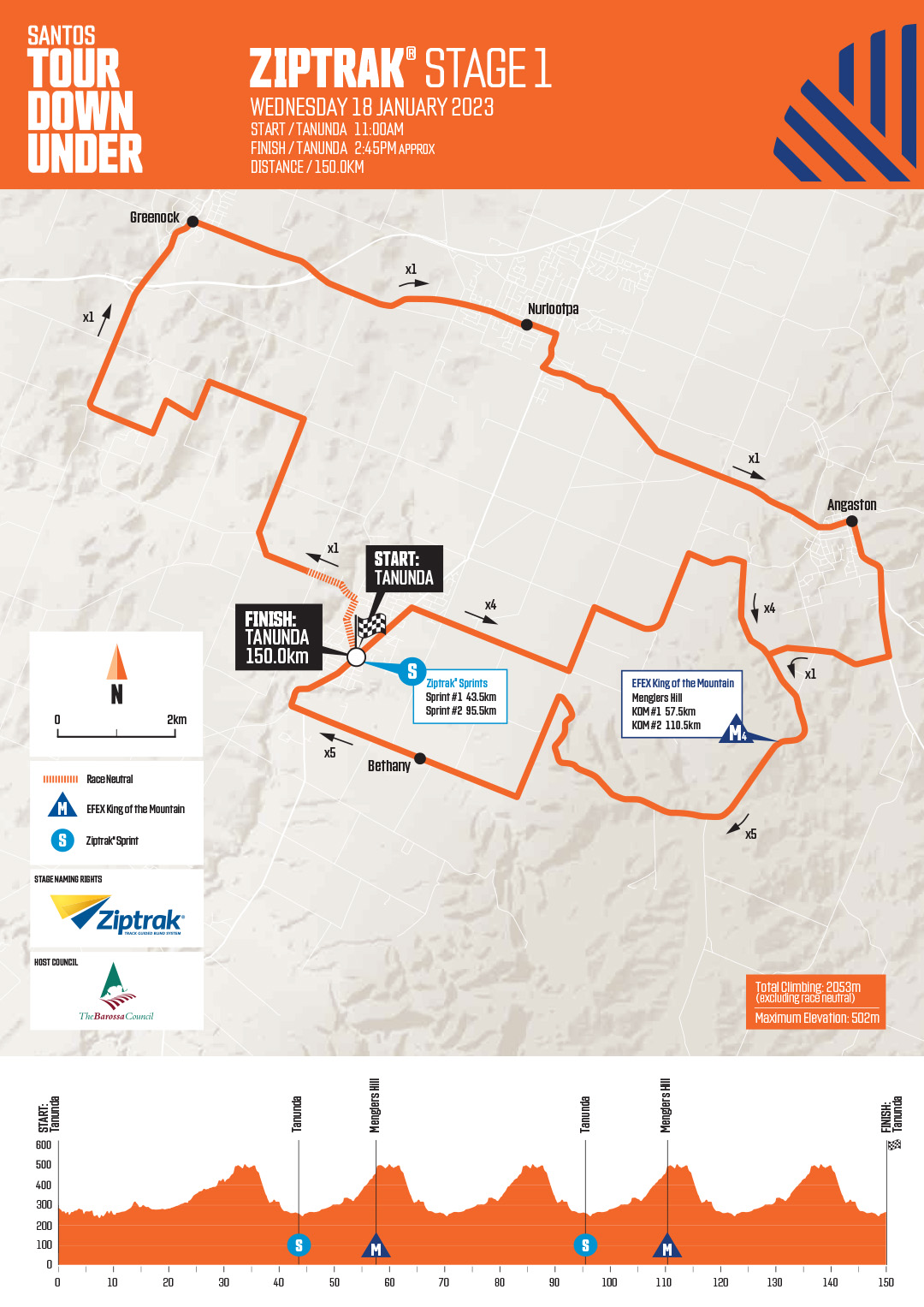 The first Tour Down Under stage start for coastal Brighton. The peloton will follow the beachfront esplanade before heading for Aldinga and traversing two climbs before the finish in Victor Harbor. 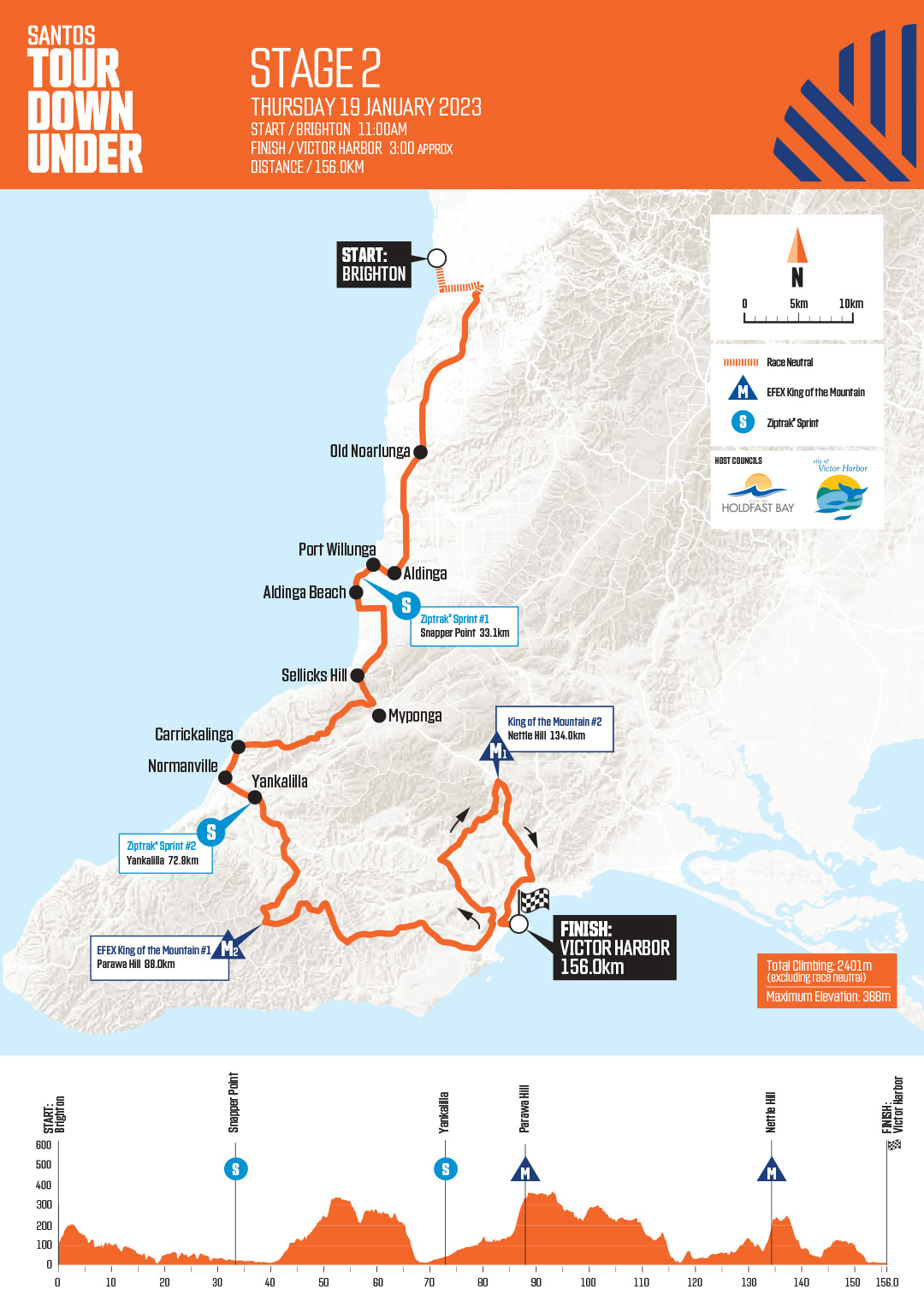 A ‘greatest hits’ of the Adelaide Hills as the climbers have their first chance to shine. Norton Summit, Checker Hill and the famous Corkscrew Road will all feature before a fast descent into Adelaide’s suburbs. 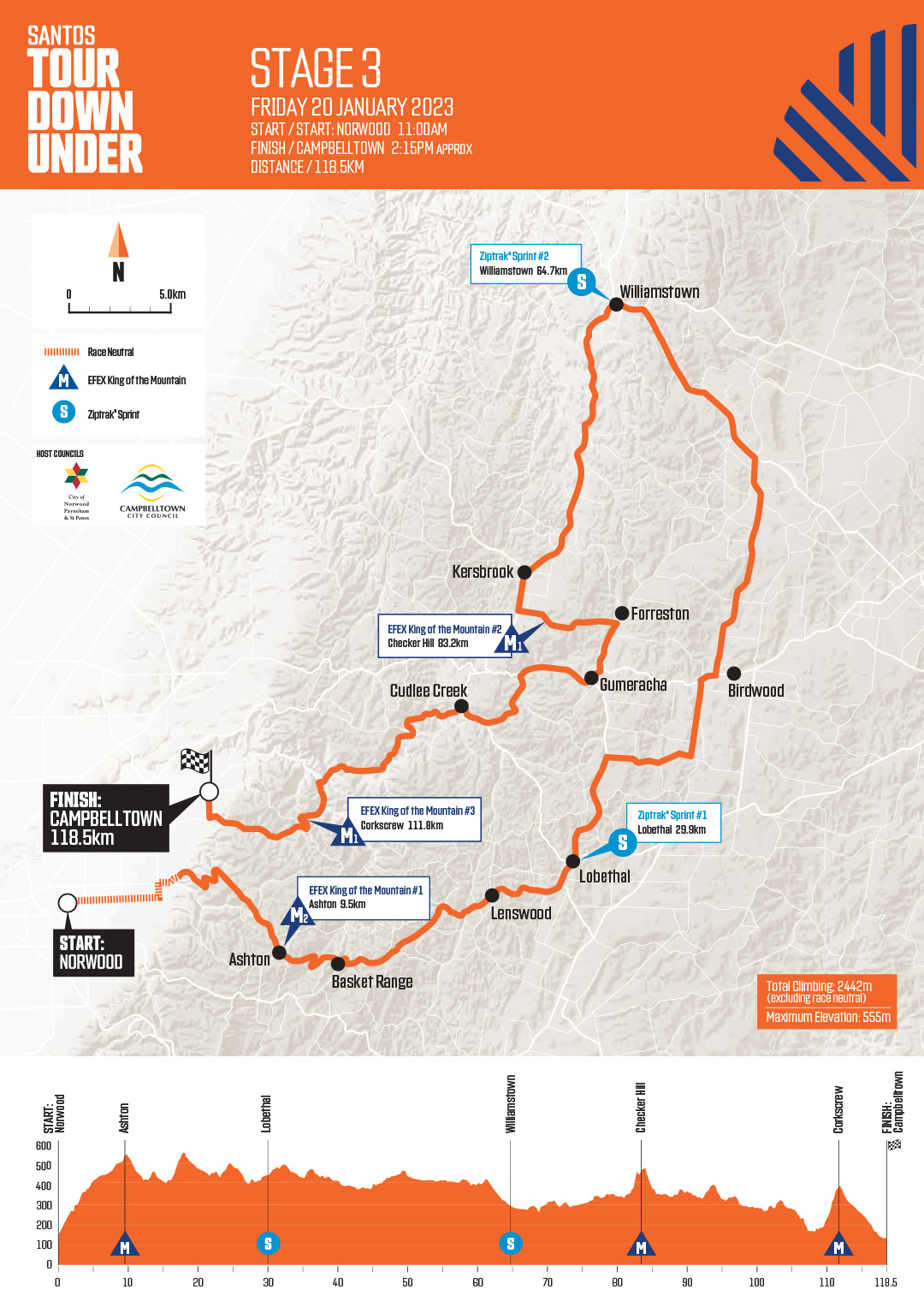 Willunga, but not as you know it. Port Willunga will host the stage start for the first time. The peloton will travel through McLaren Vale before a slight uphill sprint in the township of Willunga. 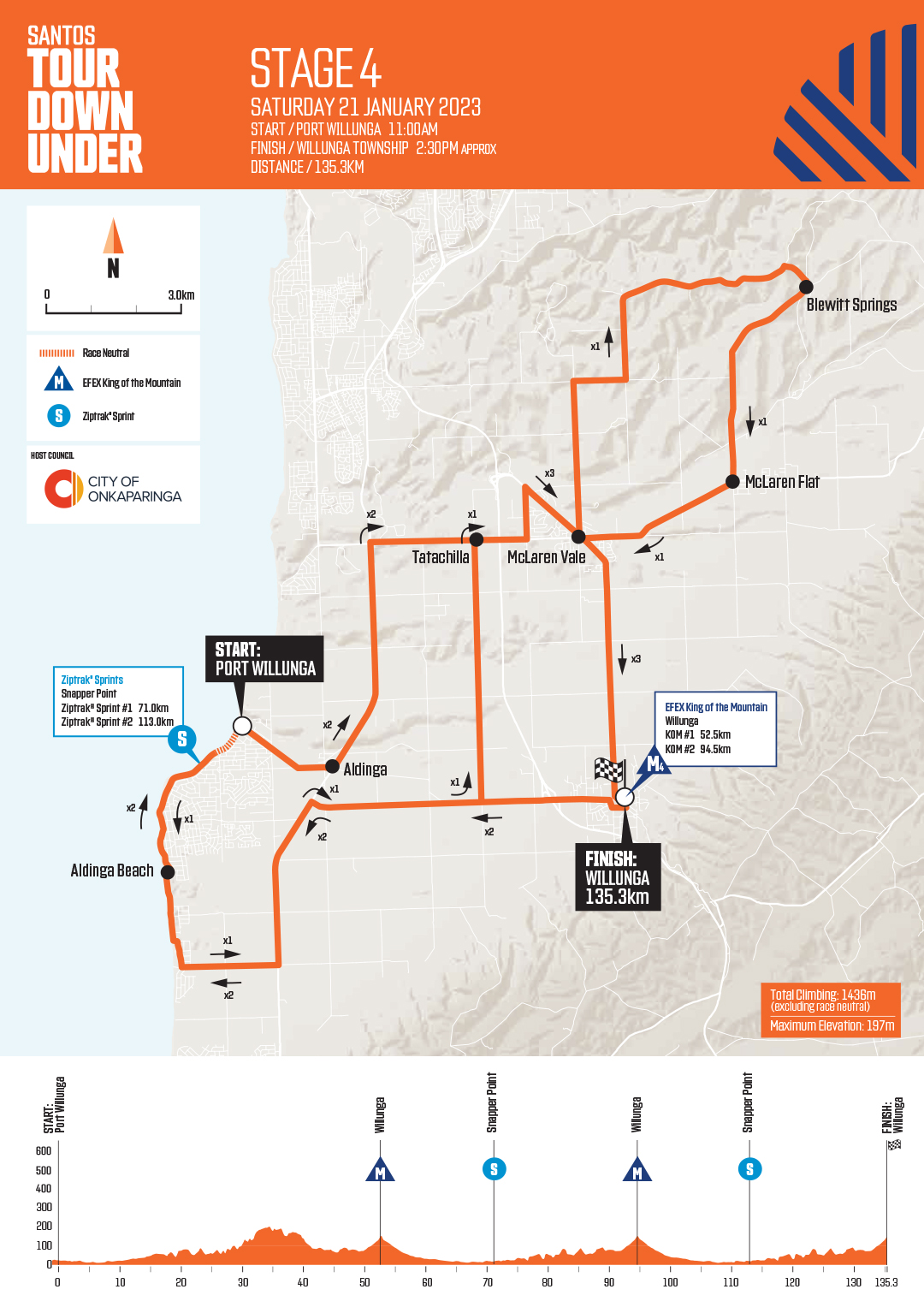 Adelaide’s must-visit lookout Mount Lofty is the new setting for the race’s uphill finale. Expect an action-packed day through the Adelaide Hills as the peloton takes on four laps of a 25-kilometre loop around Crafers. Who will win the final ochre jersey atop Mount Lofty? 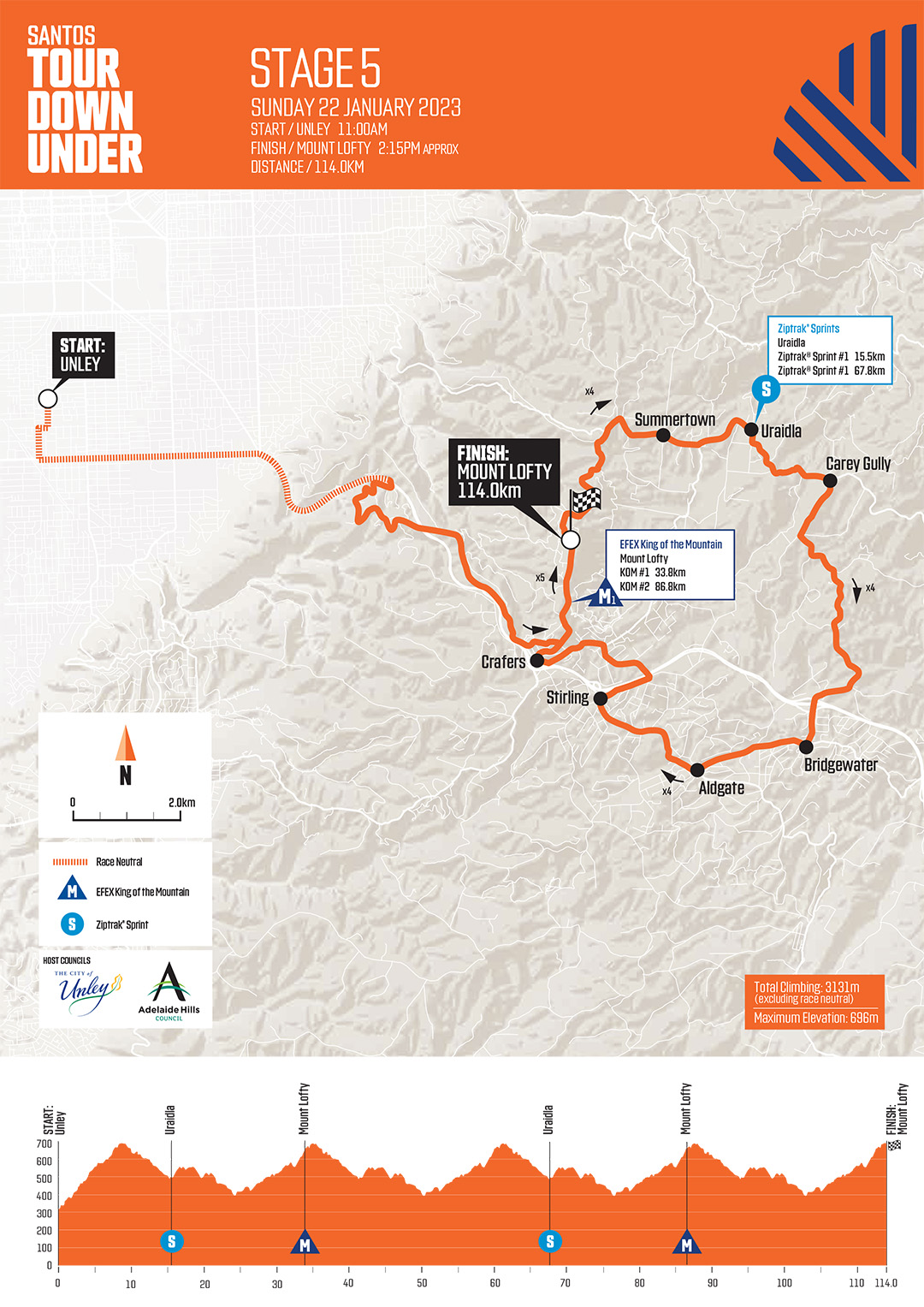