Roseman-Gannon conquers Santos Women's Tour Down Under Festival of Cycling

Roseman-Gannon delivered her promise – a stage win on Tuesday - since taking overall lead in the race on Sunday after finishing third overall at the 2021 Festival of Cycling.

Roseman-Gannon winning the Be Safe Be Seen stage 3 Lobethal to Lobethal capped off a stunning three days of racing after the Victorian star was crowned the Elite Women National Criterium champion 11 days ago at the 2022 Federation University Road National Championships in Ballarat.

“I always wanted to win the stage and we did it, it was a dream job,’’ Roseman-Gannon said.

“I think we got better as the week went on, it’s hard taking all the glory, but it was the team which got me this one. 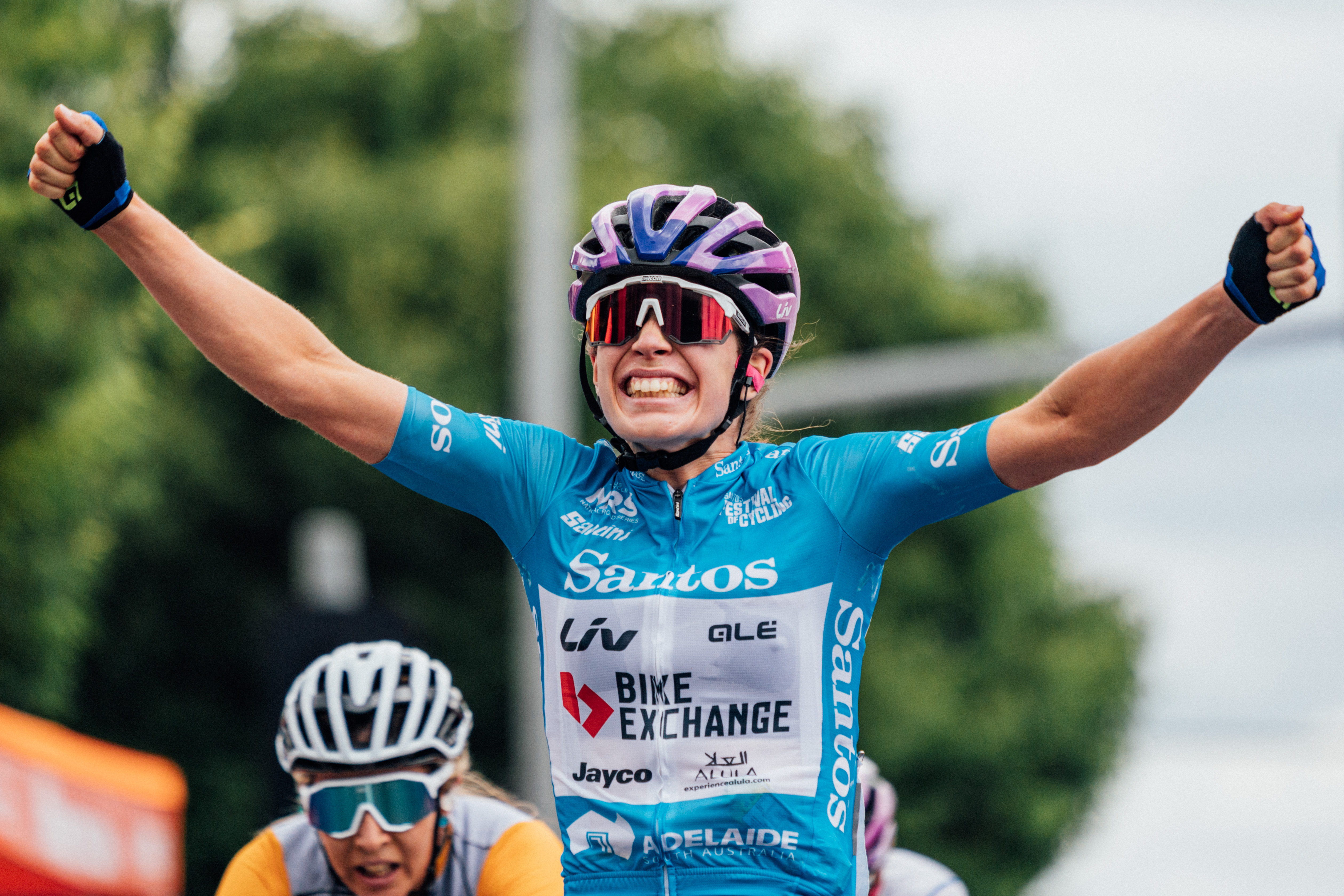 “I put a lot of pressure on myself, and I guess I care so much, but as soon as the race starts, I’m in the zone and I don’t think much, it just happens.”

Roseman-Gannon earned a hat-trick of Festival of Cycling jerseys to keep on Tuesday including the ZipTrak Sprint jersey.

And, after Roseman-Gannon penned a two-year deal with women’s UCI WorldTour team BikeExchange-Jayco in September she repaid her new team in droves.

The strength of the 23-year-old was incredible, but her team was simply stunning led by teammates, three-time Santos Tour Down Under champion Amanda Spratt, Georgia Baker, Alexandra Manly and guest rider Amber Pate.

Roseman-Gannon said she would celebrate the win with teammates on Tuesday night but also wanted to win Wednesday’s final women’s event, the Trek Night Riders Criterium at Victoria Square.

However, before Roseman-Gannon was centre stage on top of the podium at Lobethal for an adoring crowd, stage 3 was an absolute cracker. 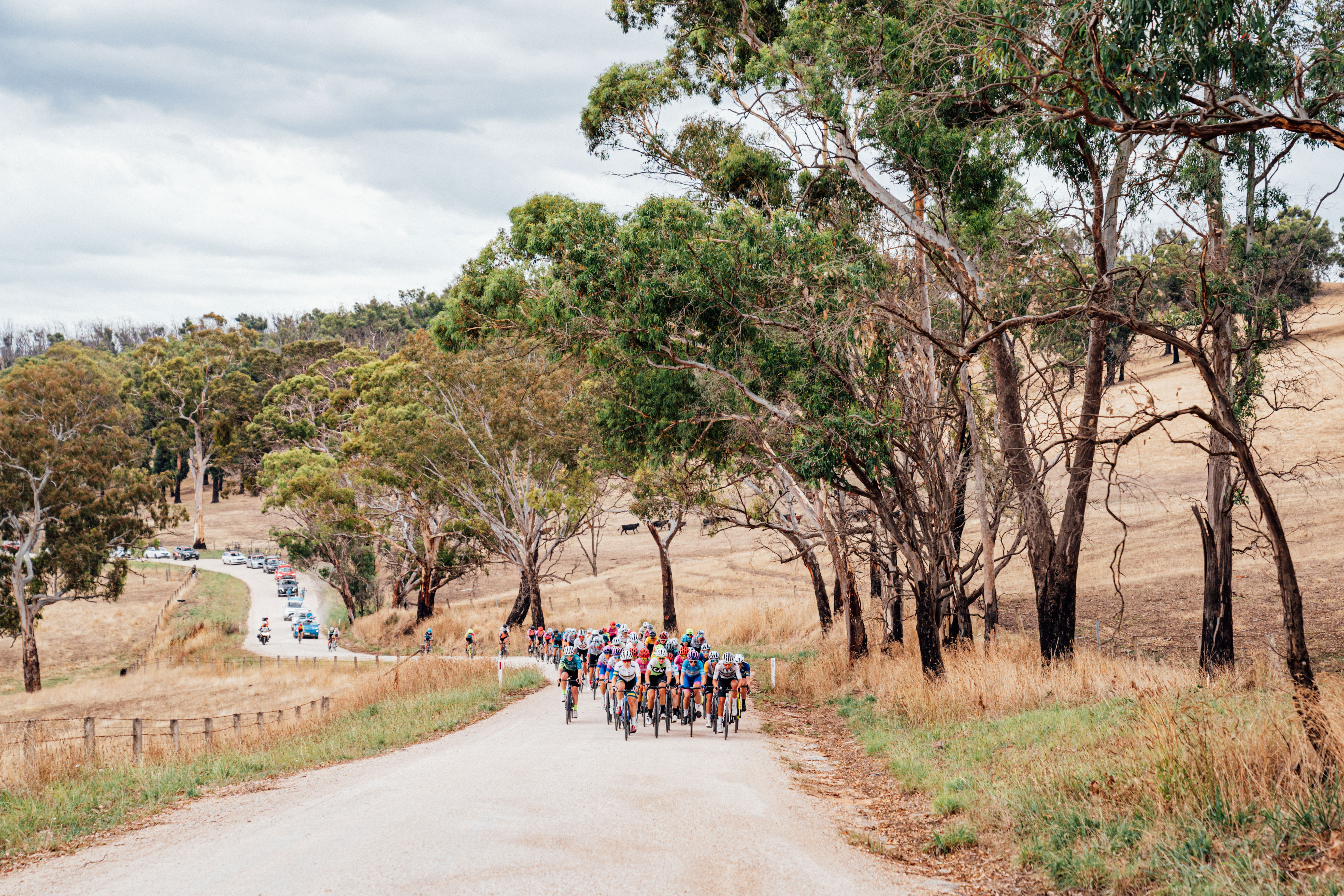 The pace of the race was frenetic as soon as the start gun was fired.

Frain put the peloton on full alert when the perfect timing of her attack enabled her to claim bonuses in the Ziptrak Sprint 1 on Main Street, Lobethal.

However, two gravel sections – the first an 1.8km stretch on Western Branch Road, Lobethal and 3.7km of dirt just before the finish on Five Lanes Road, Charleston tested the early season legs and bike handling skills of the peloton.

And a rising star also emerged during the race.

Royal Adelaide Hospital ICU nurse Libby Young thrilled cycling fans with a brilliant breakaway for Butterfields Racing to win the second intermediate sprint before the peloton swallowed her up.

Young’s attack made race favourites Roseman-Gannon, Plouffe and Frain a little nervous but Ruth Corset seemed to enjoy the aggression just before the Queen of the Mountain approached.

Grace Brown from Team Garmin-Australia then launched what appeared to be a perfect attack towards the Ngangkiparri Climb near Charleston.

The 29-year-old FDJ Nouvelle-Aquitaine Futuroscope WorldTour rider - who was on Team Garmin-Australia - at the Festival of Cycling looked to have taken QOM until Corset used her experience.

As the hilltop was approaching – it was just 476m from start to finish – Corset, the 2010 Australian road champion, got on Brown’s back wheel before overtaking.

Corset won the jersey for the second time in as many days in a remarkable comeback to cycling after she retired five years ago. 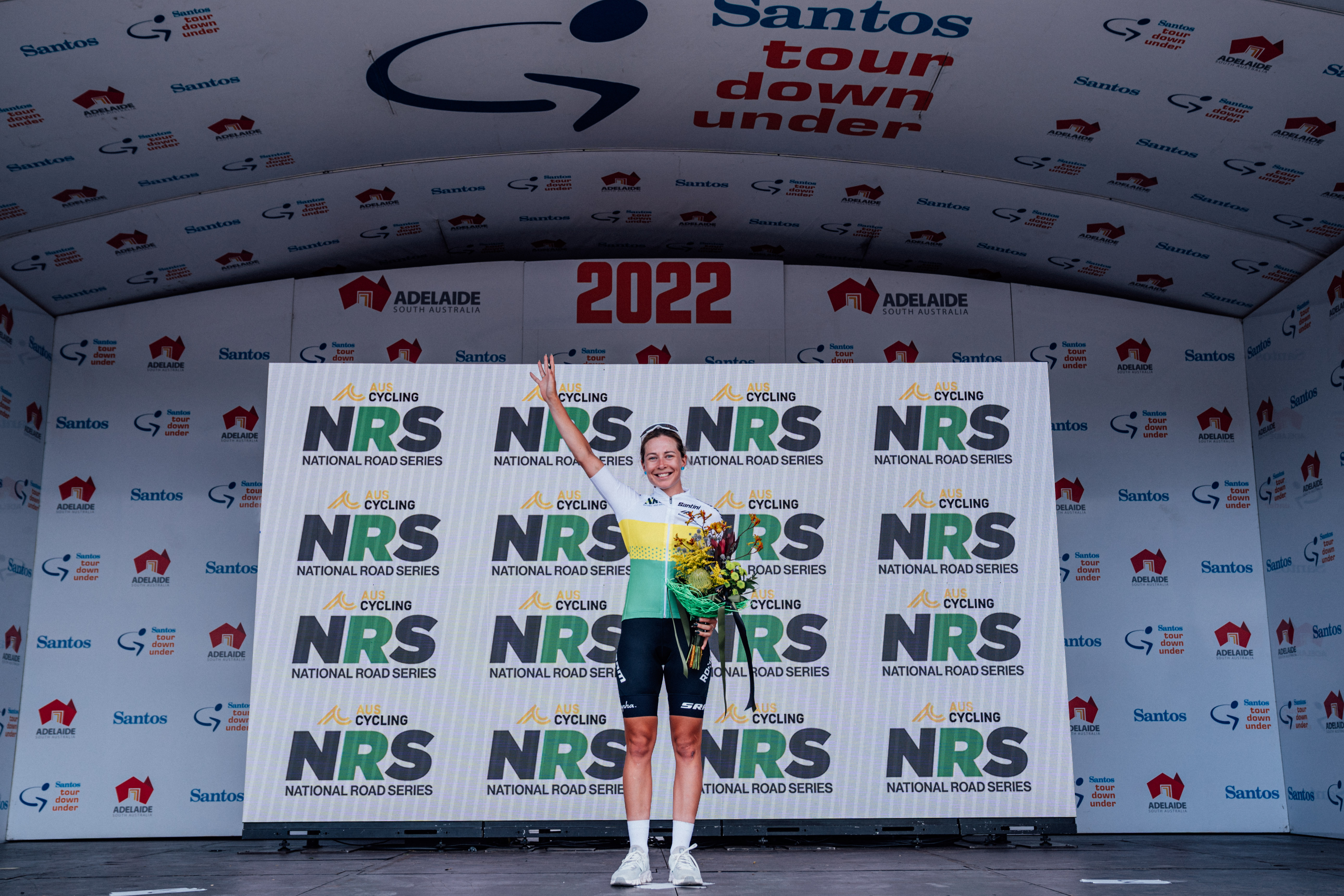 Frain takes command of the National Road Series (NRS) leader’s jersey following the first event of 2022, with Plouffe firmly planted as the Young Rider's NRS leader heading into the NRS Tour of Gippsland from February 13 to 15.

What she said: “We put the pressure on towards the finish.

“Spratty (teammate Amanda Spratt) was up about 20 or 30kms into the race.

“It really neutralised the race and we didn’t see any attrition which was fine.

“It made it a bit boring but in the last few days the NRS teams really put it up for us.

“I remember thinking when we were coming out of the gravel (near the finish), you’ve got to go so deep, and I take full responsibility for that.

“My team worked really hard for me, and I went as hard as a could on the front.

What she said: “I’m happy how it played out it and happy to grab second place on the GC.

“It was definitely on we saw a few moves and some of them we were happy to let go they weren’t too much of a threat.

That first Ziptrak sprint, I needed to win and that got me back on in the GC.

“The gravel section especially the second one, it really got driven hard and fast and the battle for Queen of the Mountain and I wanted that to be aggressive.

“The national jersey has certainly put more confidence in myself and my ability and I favour my kick.” 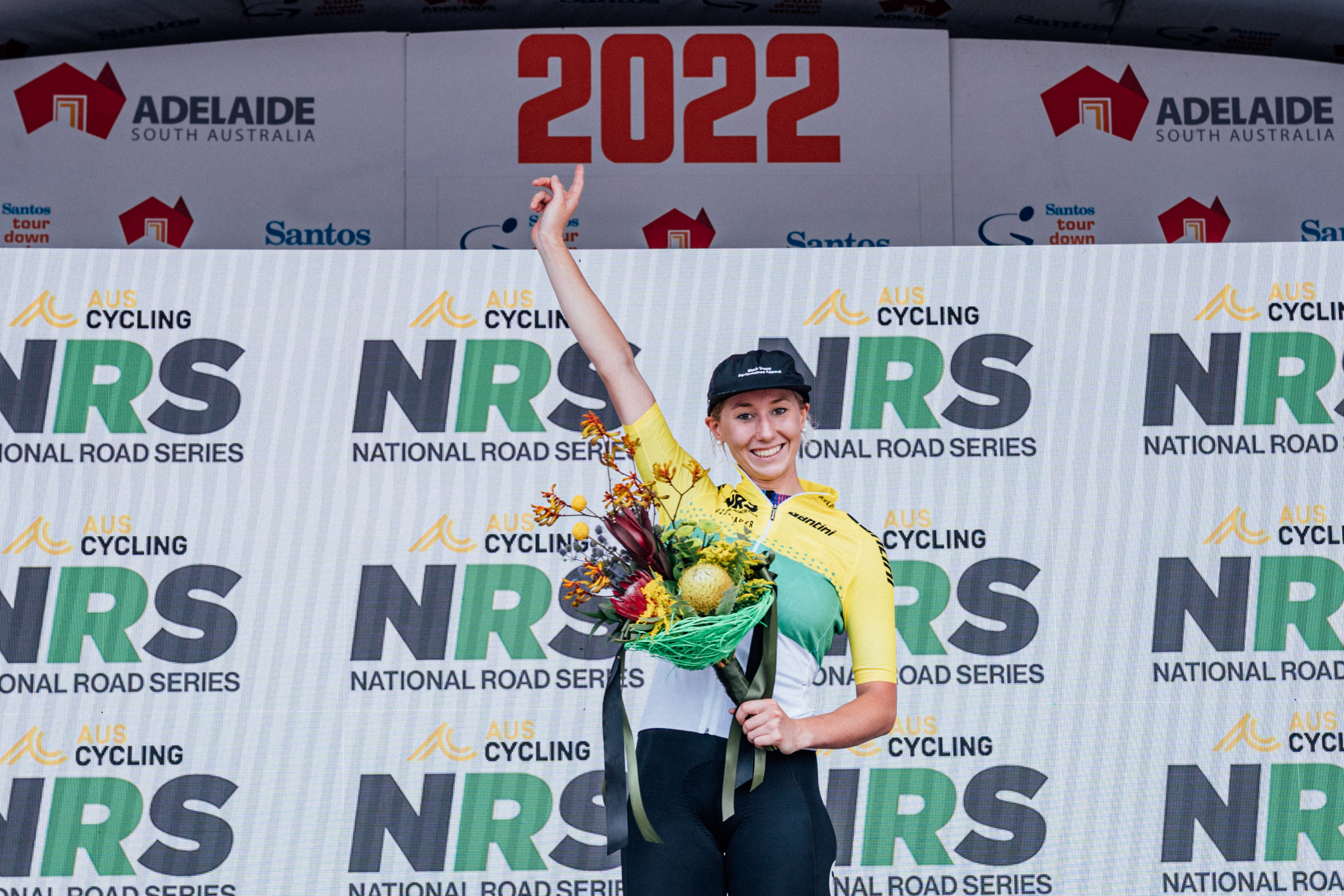 What she said: “The dynamic and the way the girls were placed made it a lot more challenging today.

“We had girls on the gravel, we had really steep long winding hills and it was a sprinters worst nightmare, but I got through.

“Some dangerous breakaways got away, over the top but I’m really happy I got through the day.

“We were missing our two most experienced riders Alexandra Martin-Wallace and Anya Louw.

“We knew we had to keep a simple plan, it was to go for intermediate sprints but with so many big riders going for points I wanted to ride it like a points race on the track.

“Conserve energy and save it for what matters.

“I’m feeling much more confident for the crit, I love the crit (at Victoria Square on Wednesday)

What she said after coming out of a five-year retirement last year when her cycling daughters Stephanie and Caitlin begged her to start again:

“My teammate Nicole Wilson drove it from the front for a perfect lead out.

“Then Grace Brown attacked and when she (Wilson) stopped, I just attacked, and it worked perfectly.

“As long as the girls (daughters) keep convincing me to keep racing, I’ll keep going.

I’m enjoying racing with the girls, that’s the only reason why I’m here.

“I wouldn’t be doing it otherwise.”

What she said: “It wasn’t a boring race there was a few breakaways which is nice to see we didn’t see many of them in the past two stages.

“The gravel added lots and the girls were going full throttle.

“I’m a bit of an allrounder now and I don’t like the climbs like I did when I was younger.

“The team’s plan was to act like the tour was three stages and we’ve only got four of us in the team left and we have the criterium (at Victoria Square on Wednesday) and we’ve got nothing to lose.” 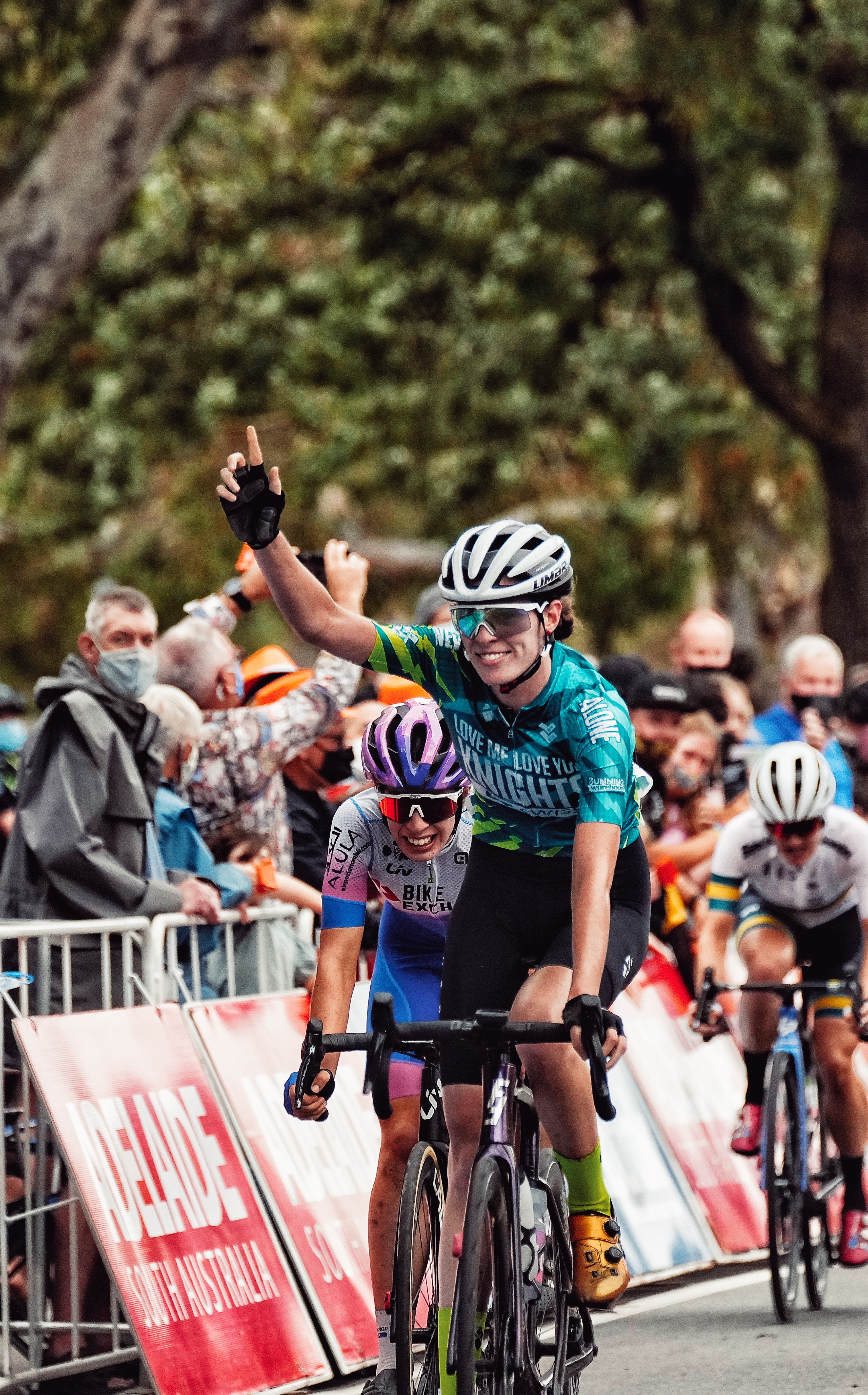