AusCycling | Q&A: Ruby Roseman-Gannon on the NRS and stepping up to WorldTour
ROAD

Q&A: Ruby Roseman-Gannon on the NRS and stepping up to WorldTour

Melbourne’s Ruby Roseman-Gannon is part of the wave of young Australians entering the top level of road cycling next year. The 23-year-old from Brunswick Cycling Club will join Team BikeExchange Jayco for 2022 and 2023.

Before she gets there, she’ll have one more race with her National Road Series (NRS) team, ARA Pro Racing Sunshine Coast. She’ll line up for their home race, Cycle Sunshine Coast, later this month.

Roseman-Gannon will wear the NRS leader’s jersey after a strong Santos Festival of Cycling and winning the Grafton to Inverell.

AusCycling caught up with Roseman-Gannon about her journey through the NRS to the WorldTour, and what we can expect from her next year.

How have you found the 2021 National Road Series, given all the disruptions?

It hasn’t been a normal year, but I don’t think we’ve had normality for a long time. It’s kind of like, every time we have an opportunity to race, it’s an absolute privilege. And when we don’t, it’s just COVID times, so I’m expecting that a lot of things are going to be cancelled.

Earlier on in the year feels kind of like a whole year ago, nearly. But yeah, the Santos Tour Down Under [ed: Santos Festival of Cycling] was super fun. I think having people like Lucy Kennedy and Sarah Gigante really upped it and really put the pressure on the NRS teams to up their games.

And then, Grafton was special for me. Coming back from an injury, and not being sure where I was at, and just giving it what I had, it worked out on that day.

I really enjoy the NRS. And it's been a great way to develop as a road rider in Australia. Without it, I probably wouldn't be here. 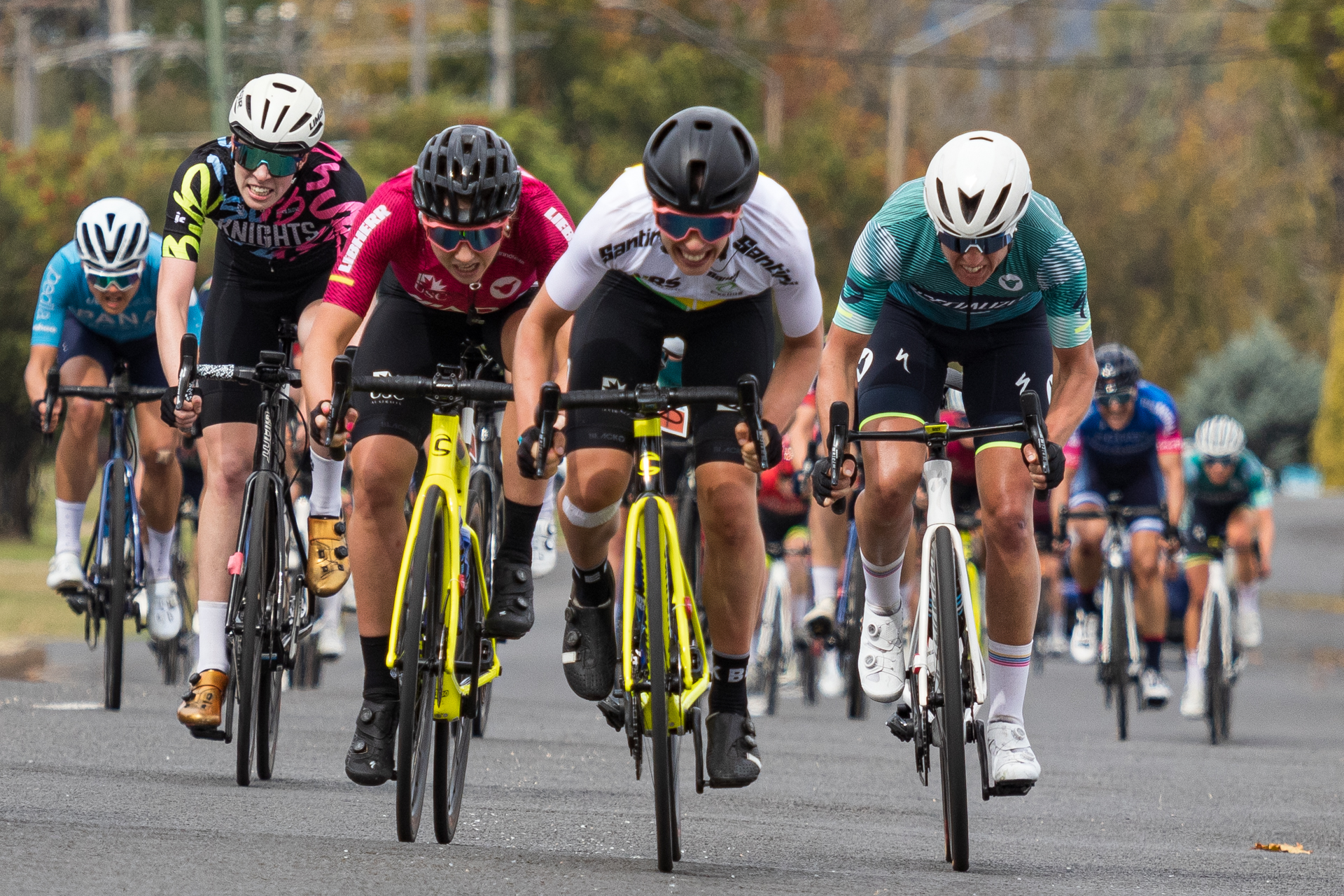 Roseman-Gannon, in the NRS leader's jersey, sprints to victory at the 2021 Grafton to Inverell. (Photo: Ryan Miu)

What about the NRS has helped you develop as a road rider in Australia?

I think one of the deficits we have here is – especially for young, up-and-coming juniors – limited opportunities to race in bunches.

I think we see that with riders going overseas and struggling sometimes, especially female riders. Because, basically from when I started cycling till probably my first NRS race, I had very limited opportunities to race in a bunch of more than 20 girls. Luckily, I had mixed club racing, which is how I developed most of my skills.

But I still remember my first-ever NRS race was Mersey Valley in 2015, when I was a first-year under-19. Going up one of those climbs, I was so petrified of being so close to the other riders, I started swerving up the climb, just doing little like ‘esses’, so that I could protect my space. The older riders were like, “What is this girl doing?”

And I remember another tour – I think it was Sam Miranda at the time – and just being absolutely petrified, like on my physical limit, but also mentally, just at the skills required to race in that bunch.

I guess – what, six years later – now I'm one of the riders that's going for the win, so it's been a great journey for me. 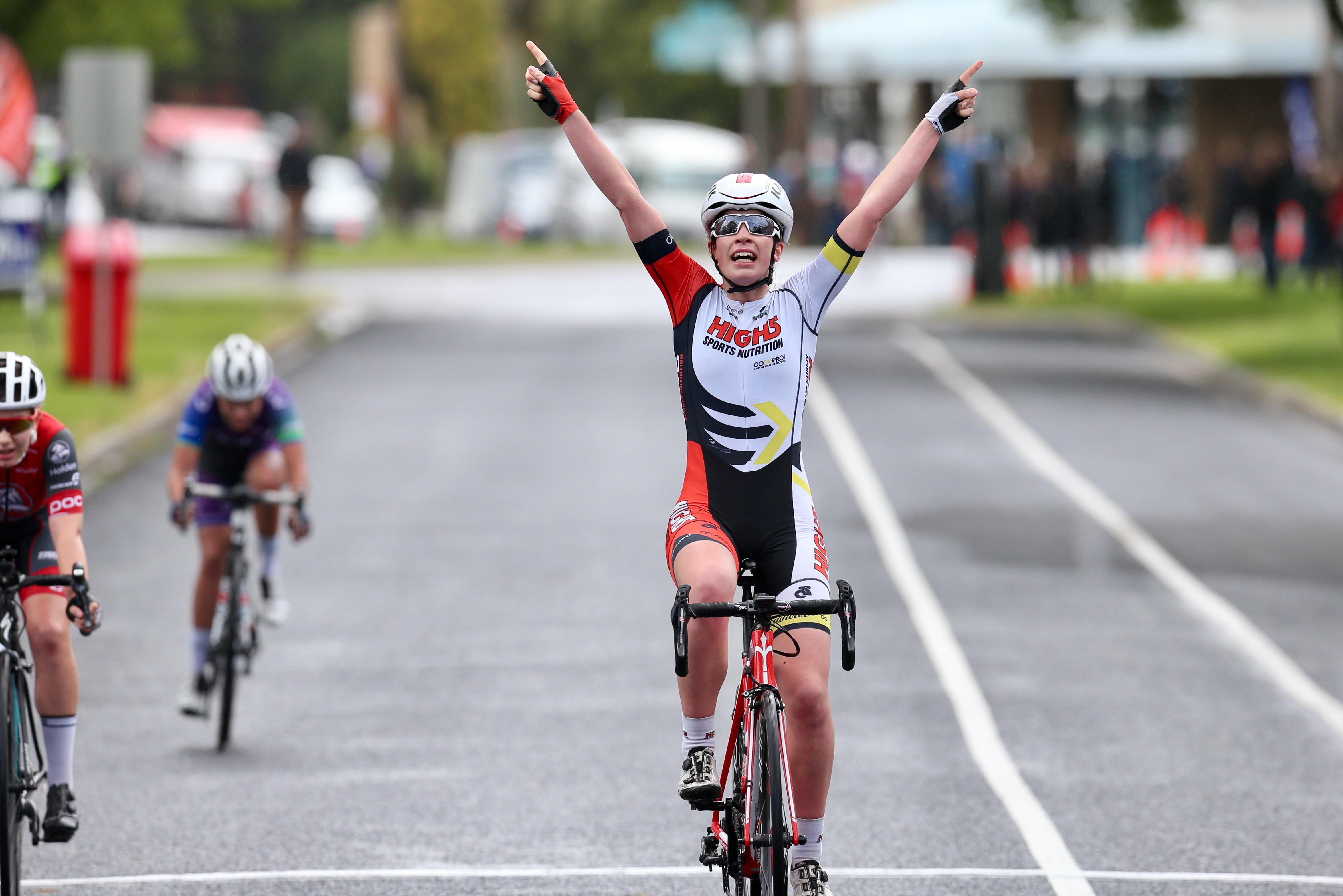 Roseman-Gannon winning a stage of the NRS Tour of Gippsland in 2017. (Photo: Con Chronis)

I didn't come into it winning. I came getting dropped, and I learned how to ride through the convoy.

Kendelle Hodges was there at the time. She was like, “we can get back on,” and I was like, “oh, I thought my race was over, we got dropped.” But we made it back on. So, all those little skills along the way.

And riding as a domestique for Lucy Kennedy on High5 Dream Team: I learned so much. And Rebecca Wiasak, how to lead out. So basically, a lot of my skills I developed through that.

Before you head to the WorldTour, this year’s NRS is still on the line. What are you looking forward to at Cycle Sunshine Coast?

Well, I think it will be my last race with ARA Pro Racing, so I’d like to make it a good one. I’ve actually never been to the Sunshine Coast either, even though I’ve been with the team for two years.

I think, even though maybe it's small-scale compared to next year, it's the biggest race I have going into nationals. So, I'm definitely going to try and defend the jersey and give it everything I've got.

And it'll be great to work with our DS Stu, and my fellow teammates in ARA for the last time. It'll be bittersweet, but I'm super excited to give it everything I've got.

What are your expectations, goals and ambitions for your first year as a professional?

It’s hard to answer that, because I feel like I’m coming in a little blind to where I’m going to be at next year, just having not raced overseas. I’ve got a lot of areas to develop in terms of the skills and experience required even to put myself in a place to win a race.

Next year will be a lot of learning, going back to basics, like when I was that under-19 in my first NRS race, just learning the ropes.

I think, once I can feel comfortable in the bunch and understand my place and, I guess, also earn some respect, that’s when I can switch on my race mode: I don’t think, and everything just happens, and I finish the race and I can’t even remember half of what happened – because it just happened.

So, I think my aim, really, is to get myself in a place where I can do that. And just go into my natural race mode and race it. Whether that's supporting my teammates or riding for myself, that's when I'm at my best.

Do you have an idea of what races you might be doing?

I have some of my races up until the Classics.

I’ve got a good spread of different races which will help me identify my strengths and weakness and the style of racing I like.

I think I’m doing Strade Bianche, then there’s two other big ones – Amstel Gold and Gent-Wevelgem, I think.

Where will you be based in Europe?

I think I’ll probably just go to Girona because that’s where everyone else is. I think I need a support network, so having a lot of other Aussies and young Aussies over there will be best for my first year.

Are you particularly close to any of them? Like Sarah Gigante, obviously; you’re from the same club.

Sarah and I are still yet to do our efforts!

We were joking in our training for Nationals last year, that she was doing her efforts imagining dropping me. After the NRS we did together, her whole thing was to drop me, and I was saying that I was doing my efforts imagining trying to hold her wheel.

So, she said we really need to start training together because it would be great motivation.

But yeah, definitely I'm excited to see Sarah there and there's also a fair few other people from Melbourne and also Adelaide that I know there, so yeah, it should be good.

Is there anything else you’d like to talk about?

I should just thank everyone who’s helped me get here – especially my club Brunswick Cycling Club, and all the teams and individuals, ARA Pro Racing Sunshine Coast.

There’s a lot of people, really, too many to be able to name in a short interview, but it takes a lot of support and the networks that I’ve kind of developed over a very long period of time of riding.

Sometimes taking this pathway can be kind of quite a self-absorbed, selfish pathway, in some ways. You take a lot from other people and you don’t really give back much, but I’m eternally grateful from all the support I’ve received from all those people.

Cycle Sunshine Coast, the final NRS race for 2021, will take place on 17–19 December. For more information or to enter the race, visit the event website.