On the last morning of the 2022 Federation University Road National Championships, the 29-year-old Tasmanian went solo and held off an elite group of chasers in the final stages of the 104-kilometre race. 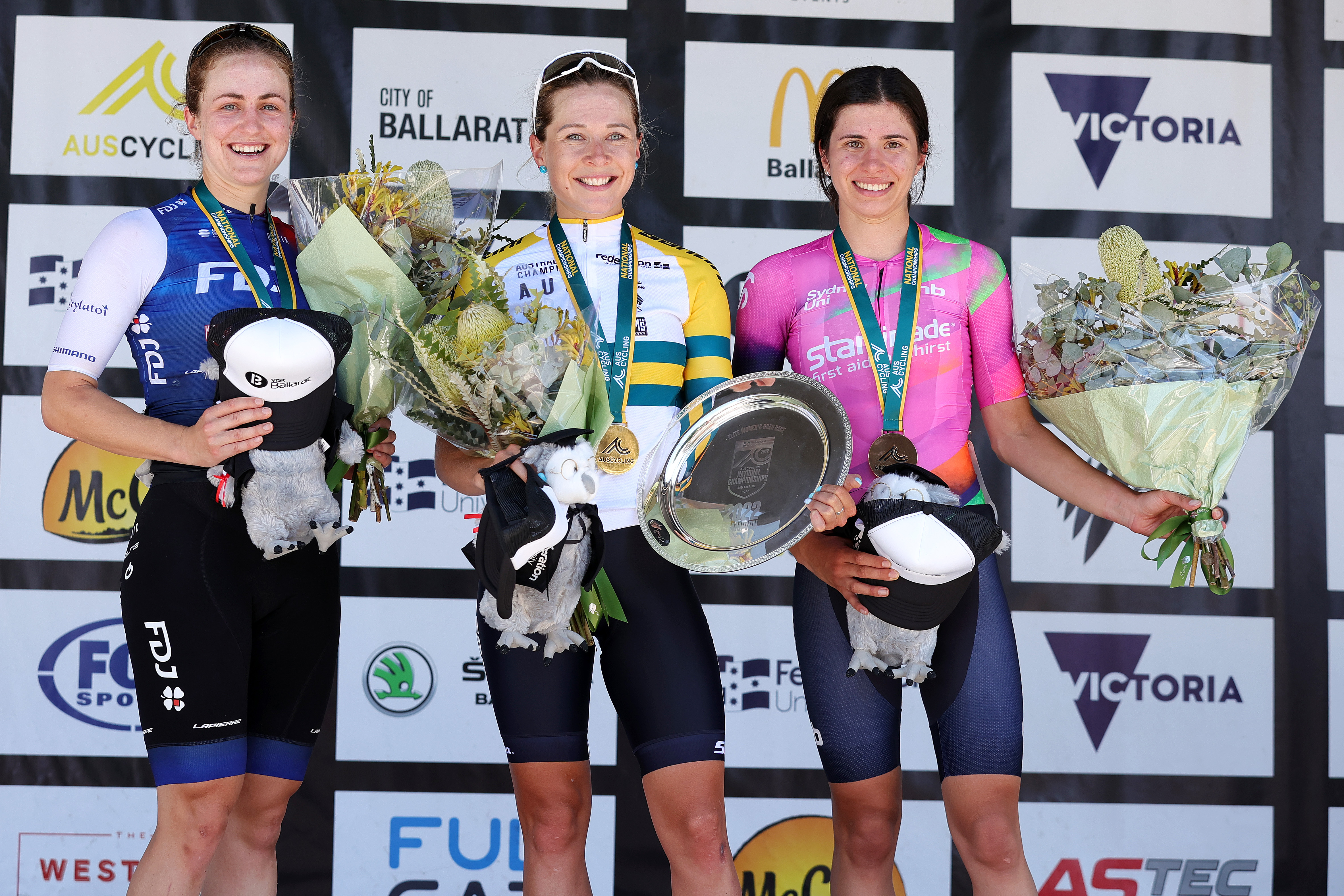 Frain – a current student at Federation University – made her decisive attack in the university’s Mount Helen Campus with 3.5km to go.

Frain’s gap was never more than a handful of seconds, but the reduced peloton of 12 riders hesitated for long enough that, by the time the sprint opened up on the main street of Buninyong, she could safely raise her arms aloft and celebrate an unexpected victory.

Her win followed an intelligent race by Roxsolt Liv SRAM, who used their numbers to place riders up the road in key breakaways.

“I thought, if I just get a little bit of a gap I’m just all in. It’s now or never because having Ruby and that still there, I didn’t want them there, not for me, and then the gap opened,” Frain said. “And then I was just like, ‘Don’t time trial like you did on Wednesday and you’ll be fine’.

Frain’s stock has been rising rapidly despite a number of setbacks. She only began racing four years ago and suffered several crashes including one at the Cadel Evans Great Ocean Road Race, which required surgery on her hand.

In her short career, Frain has won races in the National Road Series (NRS) and raced overseas with the USA-based Tibco-Silicon Valley Bank team, whom she represented in the first women’s Paris-Roubaix last year.

“I don’t like people saying you can’t do things. If someone says you can’t do it, I say, ‘I’ll show you’,” Frain said.

Donna Rae-Szalinski, who works in various capacities developing road cyclists through her role as Manager of Performance Pathways for the Australian Cycling Team, called Frain’s victory an “awesome story” of perseverance.

“She has faced adversity that so many people would’ve given up on,” Rae-Szalinski said. “She’s had bad crashes, she’s had so many struggles, she’s addressed everything that needs to be done – worked her butt off – and this is a good lesson for people who really want it and who are willing to work hard and they can have success like she just achieved today.”

Alyssa Polites introduced herself to the under-23 category in the best possible way, taking the win after achieving the same feat in last year’s under-19 race.

The 18-year-old held her own against her more experienced competitors, making every key selection along with fellow under-23 riders Neve Bradbury (Canyon-SRAM) and defending champion Emily Watts (Knights of Suburbia Racing), who took silver and bronze respectively.

Polites, who is also a multiple junior national champion on the track, took advantage of the BikeExchange-Jayco lead out and was able to launch an impressive sprint beyond her years and expectations.

“I was still in the bunch and it was really moving. [We] started catching all the other girls and then I thought, ‘Oh, I'll just give it a crack in the sprint and see how we go’,” Polites said.

“[My aim was] just to stay in the bunch honestly, stay in a bunch and enjoy the experience more than anything. Just to race with all the pros is such a highlight for me.

How the race unfolded

Frain’s victory came at the end of an entertaining race in which NRS teams Roxsolt Liv SRAM and InForm TMX MAKE used their numbers to put pressure on the smaller, but more highly fancied, UCI WorldTour outfits.

82 riders departed the start line in Buninyong on a warm summer’s morning.

The under-23 and elite women faced nine laps (104.4 kilometres) of the Buninyong circuit, including the climb of Mount Buninyong and the twisting section through Federation University’s Mount Helen Campus.

Time trial champion Grace Brown was the pre-race favourite, but was without teammates. Criterium champion Ruby Roseman-Gannon had Alexandra Manly for support and a stellar run of form behind her, having won all seven races she’d started this summer. 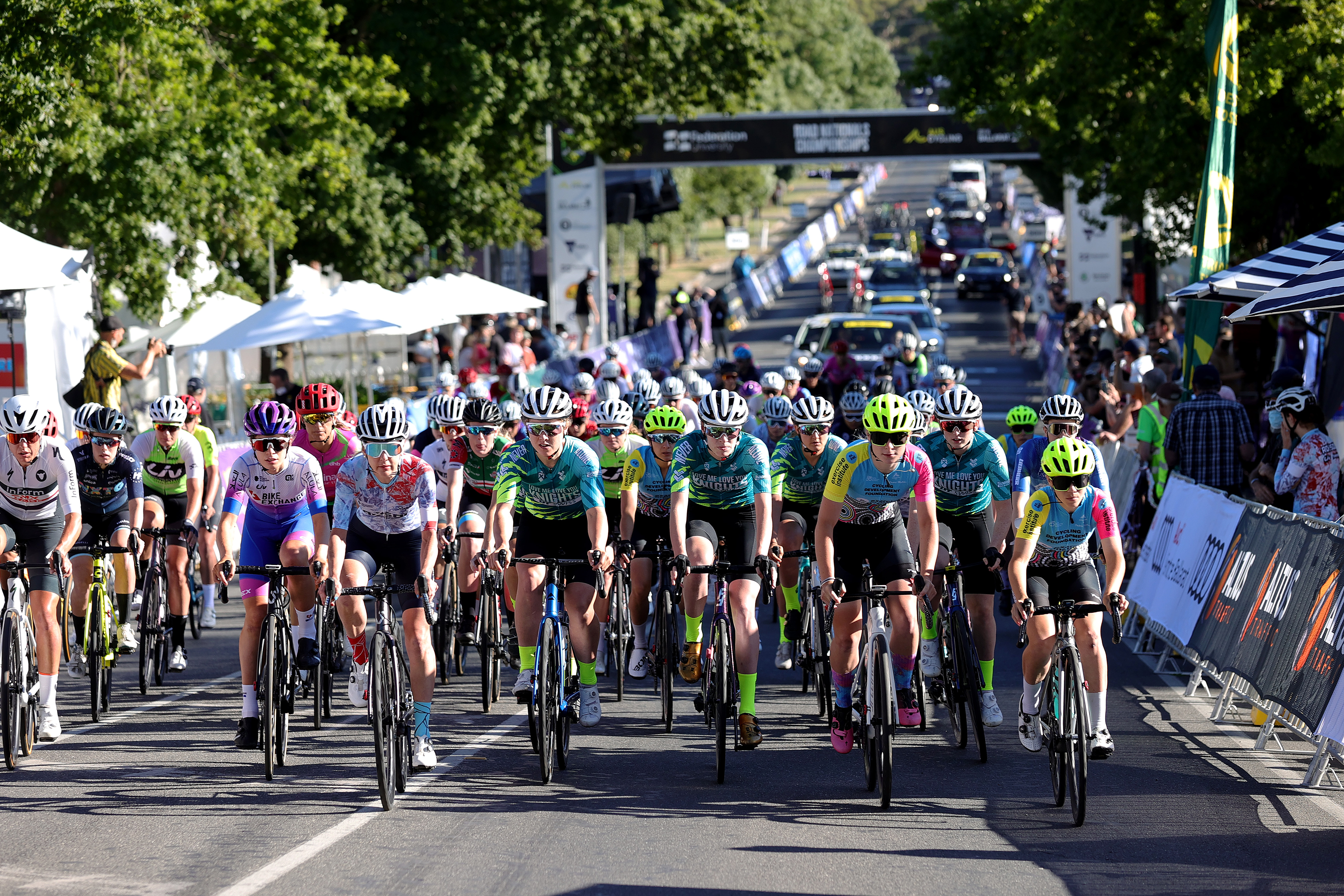 On lap two, a crash in the Federation University campus held up several riders and forced the early withdrawal of under-23 time trial and criterium champion Anya Louw (ARA Pro Racing Sunshine Coast). 2010 champion Ruth Corset (VA Pro Racing) was also forced to chase through the convoy to rejoin the peloton.

The peloton was content to roll together comfortably until five laps to go, when it thinned down on Mount Buninyong under the pressure of Frain’s team Roxolt Liv SRAM, led by 2020 silver medallist Justine Barrow.

Barrow’s teammate Emily Herfoss then went solo, opening up a gap of 50 seconds by the next ascent of Mount Buninyong.

Matilda Raynolds (InForm TMX MAKE) set off in pursuit, with yet another Roxsolt Liv SRAM rider in Tilly Field glued to her wheel. The pair reached the lone leader at the start of the penultimate lap before Herfoss was dropped after her individual effort.

50 seconds behind, the remnants of the peloton – now with only 15 riders or so – saw various accelerations from Brown, Rachel Neylan (Team Cofidis) and Neve Bradbury (Canyon-SRAM), while Frain could follow the wheels with her teammate up the road.

With just over a lap to go, Manly went to the front to assist with the chase just as Raynolds dropped her breakaway companion up ahead. 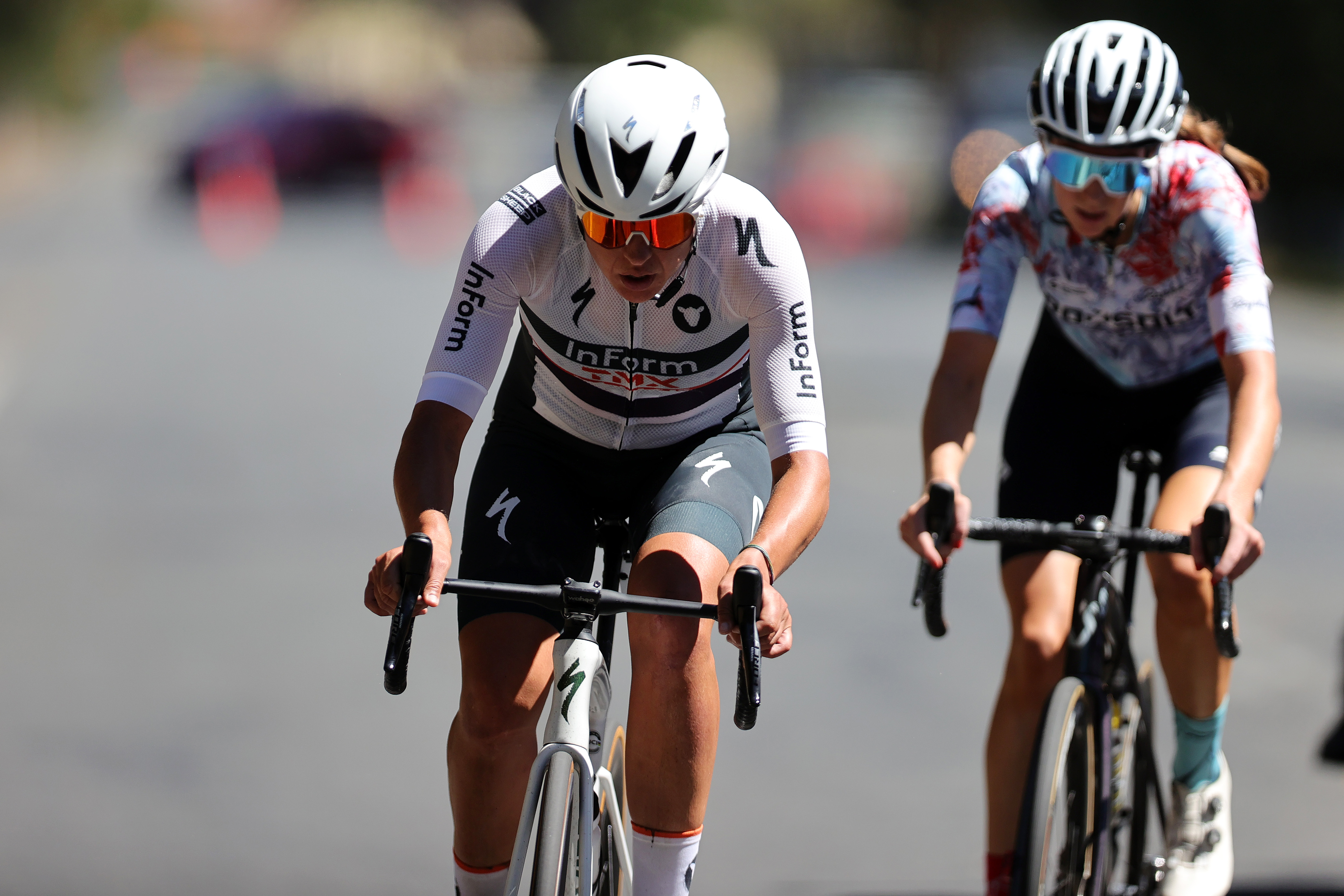 The race came back together on the final climb and Corset drove the pace over the summit, reducing the field to just 10 riders, with Manly among those distanced.

As the riders entered the university campus, Neylan and Brown put in several attacks but were quickly marked.

With 3.5 kilometres to go, Frain put in her move and was given more latitude than her UCI WorldTour rivals had enjoyed.

After a brief acceleration from Neylan, the riders behind began looking at each other to take up the pace while Frain pressed on alone to establish a gap of around 10 seconds.

In the last kilometre, Georgie Howe (Knights of Suburbia Racing) accelerated first before Manly, who had rejoined the main group, began her lead-out for Roseman-Gannon.

However, Frain was already halfway up the finishing straight by the time the chasers came into view, and as she approached the finish, she indulged a glance behind to confirm that the win was secure.