After a few years without the green-and-gold jersey, pre-race favourites Grace Brown (FDJ Nouvelle-Aquitaine - Futuroscope) and Rohan Dennis (Jumbo-Visma) have regained the individual time trial Australian titles on the first day of the 2022 Federation University Road National Championships in Ballarat.

With 2021 champion Sarah Gigante absent due to illness, Grace Brown was the outright favourite in the elite women’s event. The Victorian, who placed fourth at last year’s Tokyo Olympics, delivered a performance matching her world-class pedigree.

On a warm but windy summer afternoon, Brown took to the 28.6-kilometre course around Federation University’s Mount Helen Campus donning the blue, white and red of her new French-based team.

The 29-year-old set out with a scorching pace, catching last year’s bronze medallist Nicole Frain – who had started a minute ahead – by the halfway point.

As the wind picked up, Brown slowed slightly in the second of two laps, but she had enough in the tank to win by over a minute ahead of South Australia’s Amber Pate (InForm TMX MAKE) and Englishwoman-turned-Melburnian Lisa Jacob (Knights of Suburbia Racing).

Brown raced home to her second national elite women’s individual time trial in a time of 41:28.68 at an average speed of 41.37km/h. 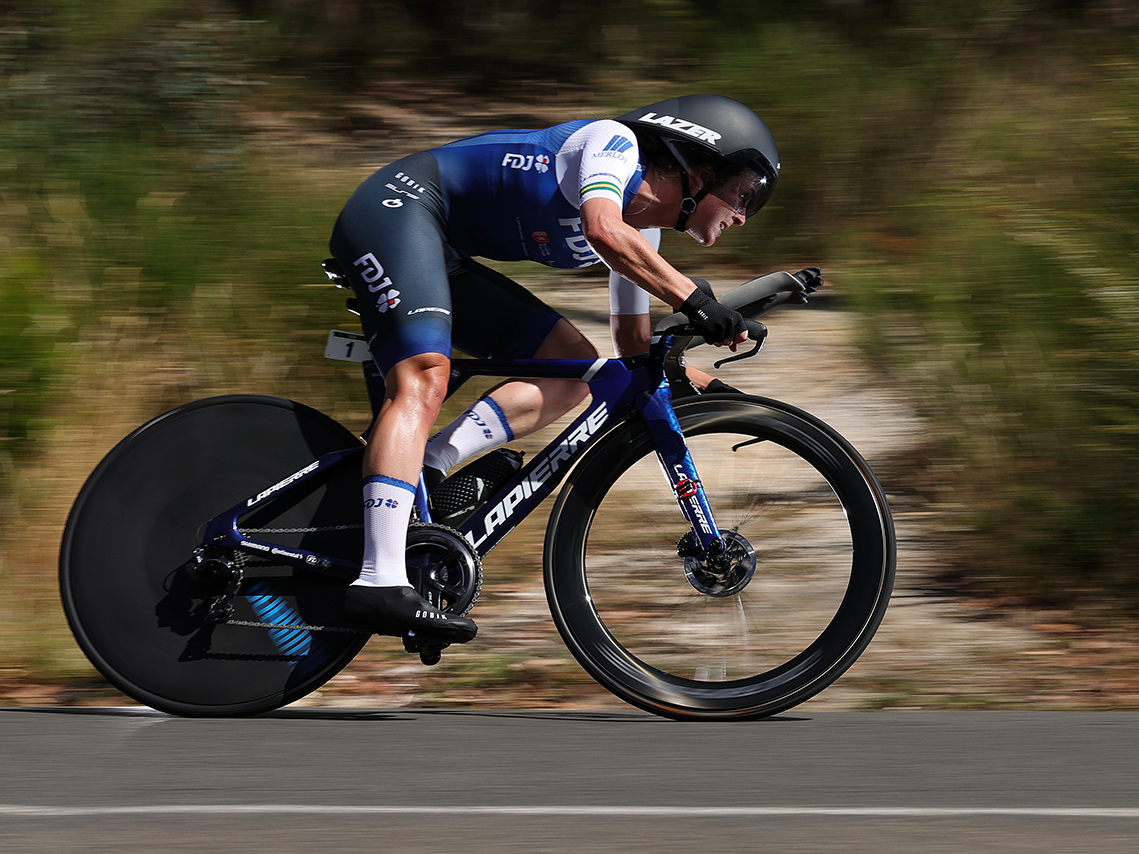 Grace Brown 🥇 Elite Women: “I really wanted to get this for FDJ. I think a lot of people were expecting me to win it as well, so it's nice to have that done now. It was a pretty hard race, actually; it didn't come easy. I'm proud of the effort and happy to have the jersey for the year.

“I know that a lot of girls have been working really hard at the time trial. I was ready for some good competition today. I think I think it's great how good the field was today and the pressure that I felt as well.

“It's really special [to win this] for FDJ. They have supported me a lot already in my preparation for the time trial. I really wanted to get this win for them and their first win of the season. So, I think we're off to a good start.

“FDJ really respect the national champion’s jersey. I think it's really special to have the colours and I'm looking forward to seeing what they produce with the Australian TT suit.”

The elite men’s race was billed as a head-to-head battle between UCI WorldTour riders Rohan Dennis and Luke Durbridge (Bike Exchange-Jayco), both of whom had won the title on multiple occasions.

The men tackled two laps of a circuit centered on the Federation University campus for a total of 37.5km.

Sporting the yellow and black of new trade team Jumbo-Visma, Dennis was the penultimate rider to start, with his West Australian rival chasing one minute behind.

The pair seemed evenly matched after the opening lap, with both Dennis and Durbridge catching Team BridgeLane’s Alastair Christie-Johnston. Dennis would be the one to pull out an advantage on the second lap, and when Durbridge failed to come into sight long after the South Australian had crossed the line, it was clear to those roadside that Dennis had won the 2022 bout.

The two-time world champion completed the course in 45:33.58 at an average speed of 49.39km/h, with Durbridge taking silver and last year’s under-23 runner-up Conor Leahy (Inform TMX MAKE) winning bronze.

The win draws Dennis level with Durbridge on four elite men’s titles each, one behind Nathan O’Neill’s all-time record.

2021 winner Lucas Plapp (INEOS Grenadiers) was not able to defend his title due to being a close contact of a COVID-19 case. 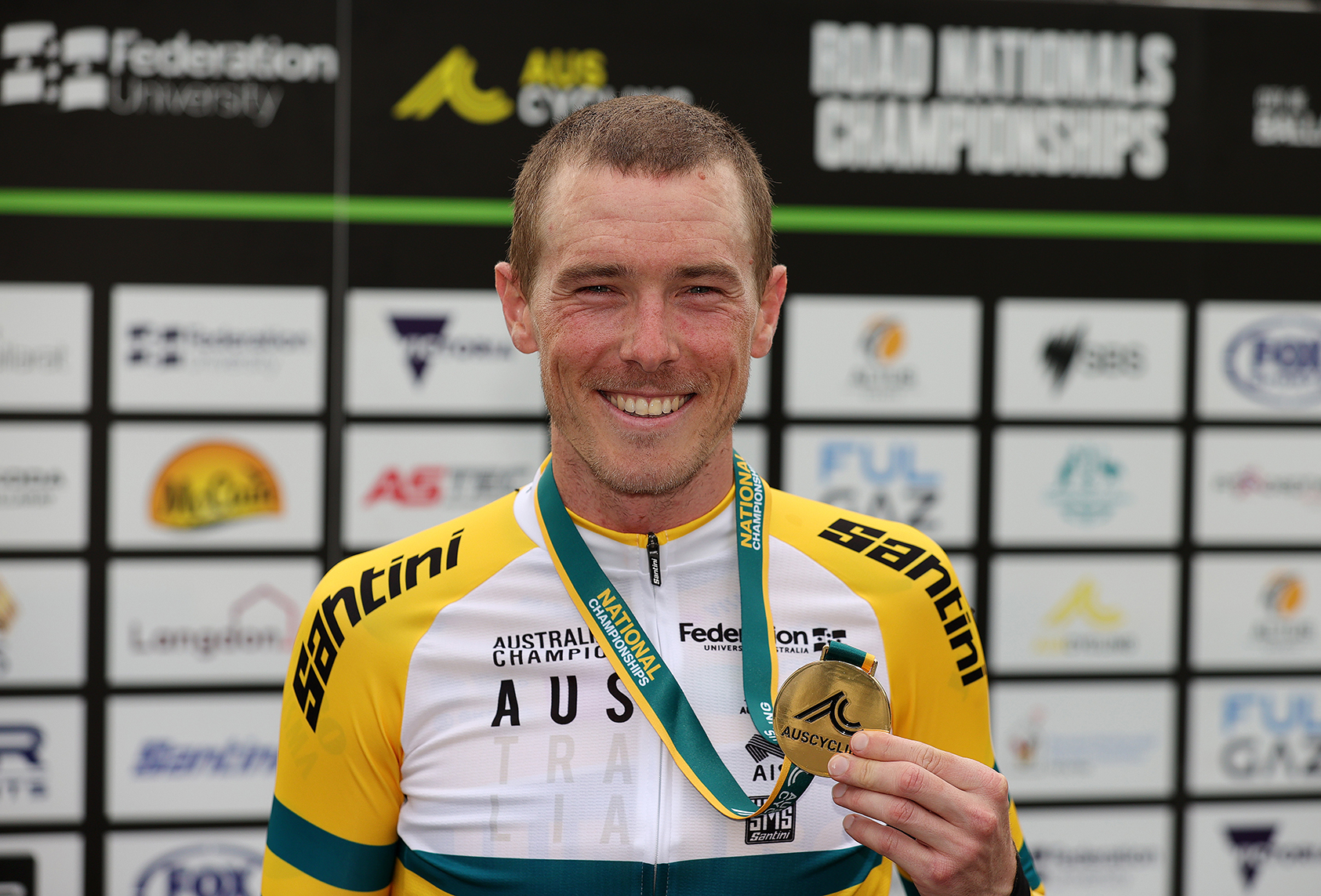 Rohan Dennis 🥇 Elite Men: “It’s been a good two years since I’ve been back in Australia and it’s always good to win Nationals.

“It’s never easy as I’ve shown both times when I was world champion; I couldn’t win. It’s always about who can really prepare properly and everyone brings their A-game in January, so it’s always one of the hardest ones to win in Australia.

“I’m just glad I got through unscathed. It’s been obviously a long two years. I hadn't seen my family for two years and you don’t realise how much you need to fill that cup back up. So, even though I find Europe home at the moment because everything I have at home is there, Australia still has a lot of meaning to me.”

The Tasmanian rider clocked a time of 43:31.17 to finish sixth overall among the elite women, averaging 39.4km/h.

Anya Louw 🥇 Under-23 Women: “I’ve never won an Australian national title before. I’m in the same age group as what Sarah Gigante has been in over all the years. I’ve come second many times but never got on the top step, so it means so much to me.

“It gives me a lot of confidence. I worked really hard for this event. Hopefully, good things are going to come in 2022.”

Carter Turnbull 🥇 Under-23 Men: “I felt like I was riding fast but I could see my splits were a bit slower than what I remember doing last year, so I was a bit nervous just on that front, but I think the slower course meant everyone was going a bit slower.

“First race of the year, so it’s always nice to get a win on the board. Sometimes it takes a while, especially at Nationals, so hopefully I can keep this form going and get a few more good results on the board this year.”