After three years of knocking on the door, pre-race favourite Ruby Roseman-Gannon (BikeExchange-Jayco) claimed her maiden elite criterium title on the rectangular circuit in Sturt Street.

In her first race in BikeExchange-Jayco colours, the 23-year-old from Brunswick finished off an impeccable lead-out from Alexandra Manly to win from a select front group.

Roseman-Gannon – who is a track endurance athlete for the Australian Cycling Team – had stood on the criterium podium for the last three years without an elite victory.

With seven laps to go of the 1.1-kilometre circuit, a dangerous group of nine broke clear under the impetus of Lisa Jacob (Knights of Suburbia Racing).

From the peloton, Amber Pate (InForm TMX MAKE) bridged across on her own strength, with Manly enjoying a free ride on her wheel.

On the final lap, Manly coolly went to the front and expertly guided Roseman-Gannon through the final corner.

From there, the neo-pro to launched her sprint, brushed off a challenge from Talbot and claimed a win she’d targeted for many years. Talbot took silver while Mullens added bronze to her large collection of national medals.

By finishing fourth, Louw added the under-23 title to her time trial crown ahead of Neve Bradbury (Canyon-SRAM) and Keely Bennett (Knights of Suburbia Racing). 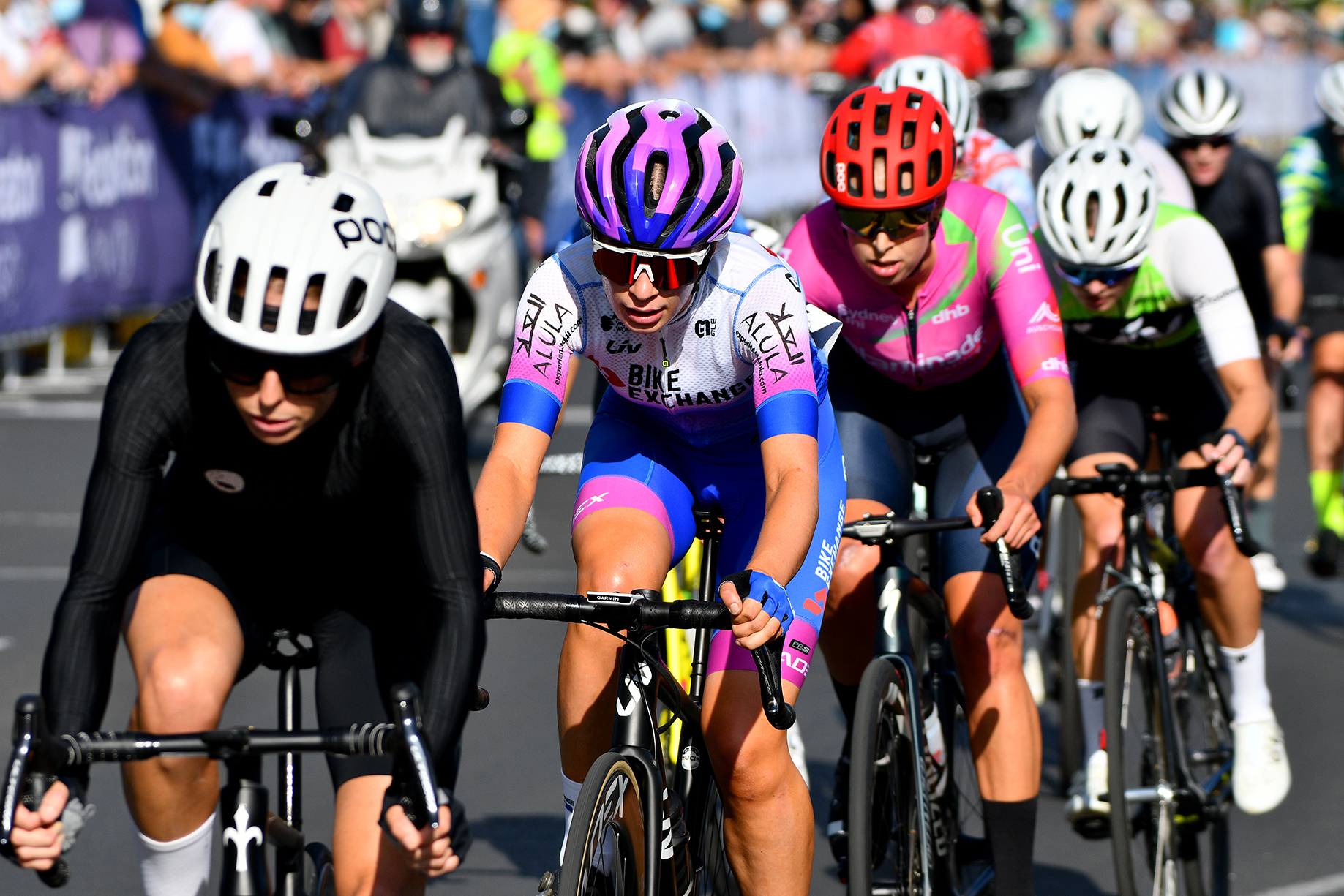 Ruby Roseman-Gannon 🥇 Elite Women: “I wanted this for a very long time, and to finish it off in my first ride in full BikeExchange kit means so much.

“I couldn’t have done it without my BikeExchange-Jayco teammate Alex Manly because she is so selfless; she is just always there for her teammates.

“I knew that Alex would give me a perfect lead-out I just didn’t want to get boxed in. I saw a move coming on my inside so I knew that was the time to go. I went, I just gave it everything I had, just did what I have done in training one thousand times and I pulled it off."

Anya Louw 🥇 U23 Women: “I was in a lot of moves up the front and I knew the people to follow were Ruby Roseman-Gannon and Alex Manly from BikeExchange. They kind of had their two-pronged attack, and when one of them was up the road someone in my team had to be up there, so it was hard following a lot of moves in the race.

“It feels quite surreal to be honest, I didn’t expect this at all for the criterium. Coming into today I was working for my teammate Alexandra Martin-Wallace. Unfortunately, she got caught behind in a bit of a crash and wasn’t able to rejoin, so I was lucky that the roles changed a bit in the race.”

The 29-year-old from Newcastle, NSW, has for many years enjoyed competing on the road between winning cross-country national titles on the dirt.

With the peloton strung out at the start of the last lap, Ivory set off on his own, taking a handful of seconds that he held to the finish before throwing his hands in the air.

Ivory’s win followed an attack-filled race of 44km highlighted by several promising moves, the longest of which was a two-man breakaway of Jean-Pierre van der Merwe (Team BridgeLane) and Ben Carman (Nero Continental).

The race had come back together with three laps to go, thanks in large part to Conor Leahy (Inform TMX MAKE), who was working for sprinter Brenton Jones. BridgeLane attempted to counter-attack with Sam Jenner and Alistair Christie-Johnston, but only Ivory was able to make a clean break for victory. 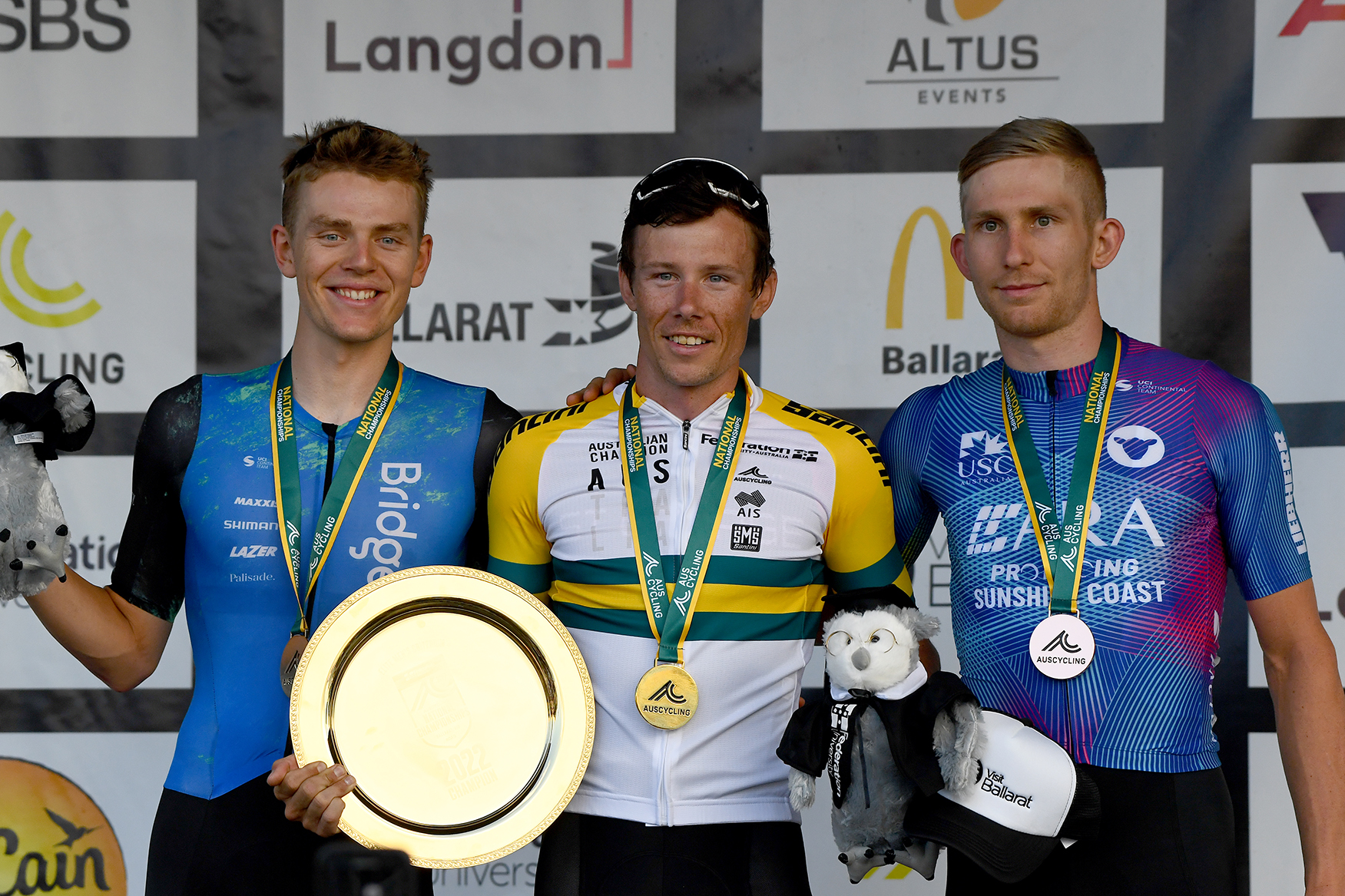 Cameron Ivory 🥇: “This is by the far the biggest ‘skinny tyre’ I’ve won. I’ve had a couple of wins and podiums in the National Road Series and fourth place in this race in previous years and I’ve always wanted to get on the podium here, so to get to on the top step, I'm so stoked about.

“I couldn’t believe it was happening until 20 metres to go when I could actually sit up and throw my hands in the air.

“I was looking over my shoulder with half a lap to go, waiting for that bunch to come but just can't believe I held onto it.

“For the St George Continental Team, it was Tasman Nankervis and me. We’re used to riding together in a two-man team. A few years ago riding at GPM-Stulz we had quite a campaign in the US, just the two of us. Tas did such an amazing job tonight, so much work chasing the moves, and gave me the opportunity to sit back in the bunch and save my legs.”

The 20-year-old’s victory came at the end of a fast and furious 33km race filled with attacks.

With favourite Blake Quick ready for a sprint, and the biggest team by numbers, Inform TMX MAKE controlled the race. Perennial contenders Team BridgeLane were also active, but when the peloton was still together with six laps together, it seemed likely that the race would end in a sprint.

However, one more surge took four riders clear, Frislie included, and with two laps to go, he made his bid for individual glory.

At the bell, the reigning scratch race national champion on the track had extended his advantage to a comfortable 12 seconds, giving him time to sit up and savour his first senior title on the road.

Graeme Frislie 🥇: “We knew we had a strong outfit and we knew we had the firepower to win, so we tried to control it all day. Then, the chance came up for me in the last handful of laps so I just jumped on it, and Josh Duffy showed behind that we had the strength to win [in] any way.

“It was kind of attacks constantly going, and no one was giving an inch. Then I saw an opportunity with some of the other boys, so I jumped in with them and I felt like I had some good legs, sent it by myself, rolled the dice and managed to come away with the win.”

The Carnegie Caufield rider broke away with Bronte Stewart (Sydney Uni-Staminade), Sophie Marr (Knights of Suburbia Racing) and Summer Nordmeyer (Norwood CC). The latter was dropped under the pace, leaving a trio with a 25-second lead at the bell.

Lucinda Stewart 🥇: “I went out there with the goal of putting the pressure down in order to reduce the bunch, just to make it a bit easier in the sprint. So, when we got a solid breakaway, I thought ‘this is good’ and coming into the sprint I knew the wind was picking up, so I wanted to sort of start from the back and try and jump the girls, which ended up working in the end.

“It means so much. I put a bit of pressure on myself today considering I did win it last year, but I have so much support behind me with InForm TMX MAKE and my parents who have all done so much, so to get the win is pretty special.” 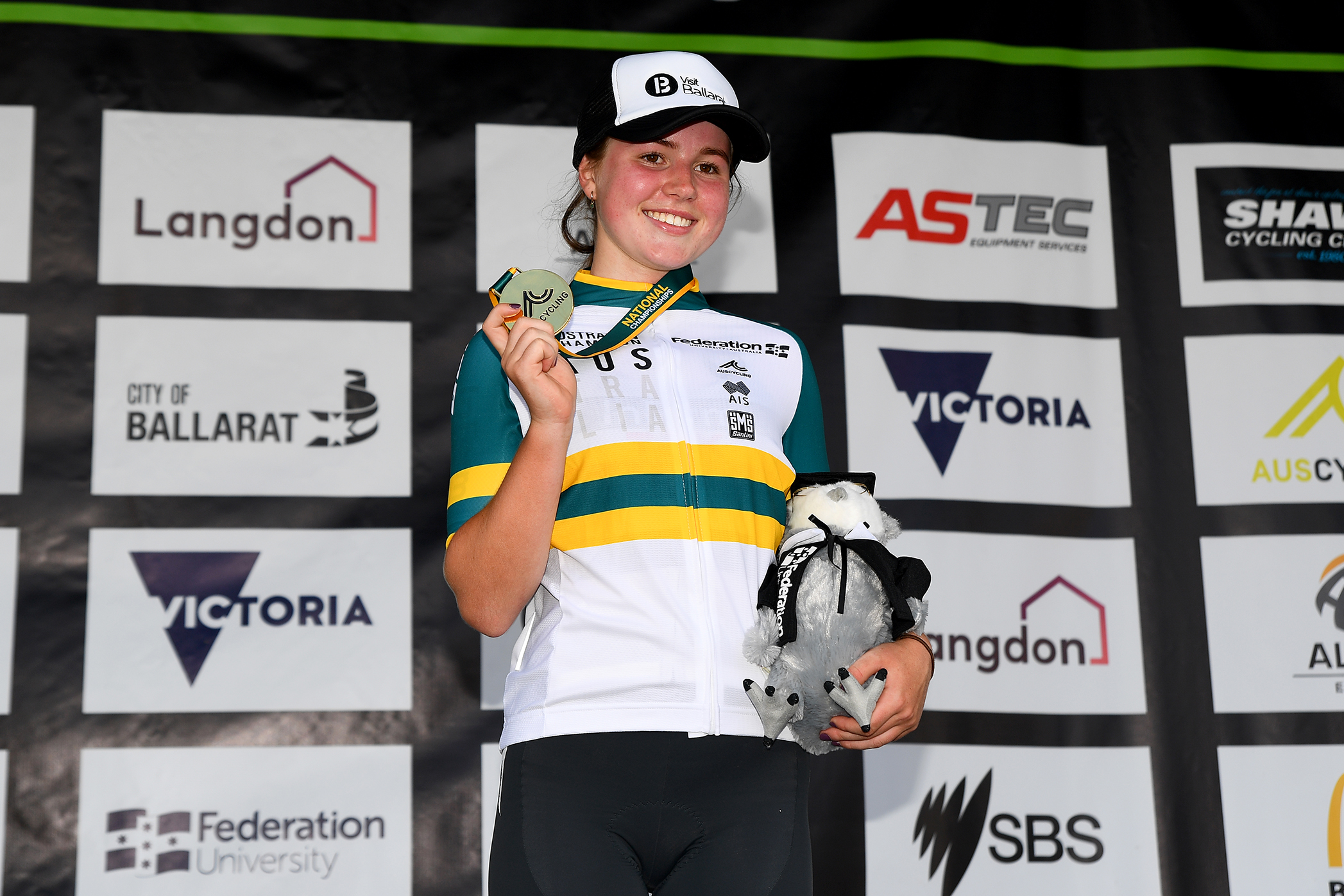 Using the long-range power that brought him the under-19 men’s time trial national championship on Wednesday, Hamish Mckenzie (ARA Pro Racing Sunshine Coast) added the criterium title to his palmarès with a long-range solo move.

With four laps remaining, the Tasmanian held a slender lead of 15 seconds but the peloton had been whittled down to just 10 chasers.

When Mckenzie’s lead grew to over 20 seconds by the time he received the bell, it was clear the Launceston teenager would claim his second gold of the week.

Hamish Mckenzie 🥇: “It was challenging for sure; the course kind of suits the breakaway in under-19s because of the gearing down the back straight. Nobody can really go any faster than anyone else, so I was just trying to push up the front and widen the gap on every lap as much as possible and just try to hold on.

“I won the TT on Wednesday and the national pursuit on the track. I love the road a bit more than the track so any result on the road is big for me.” 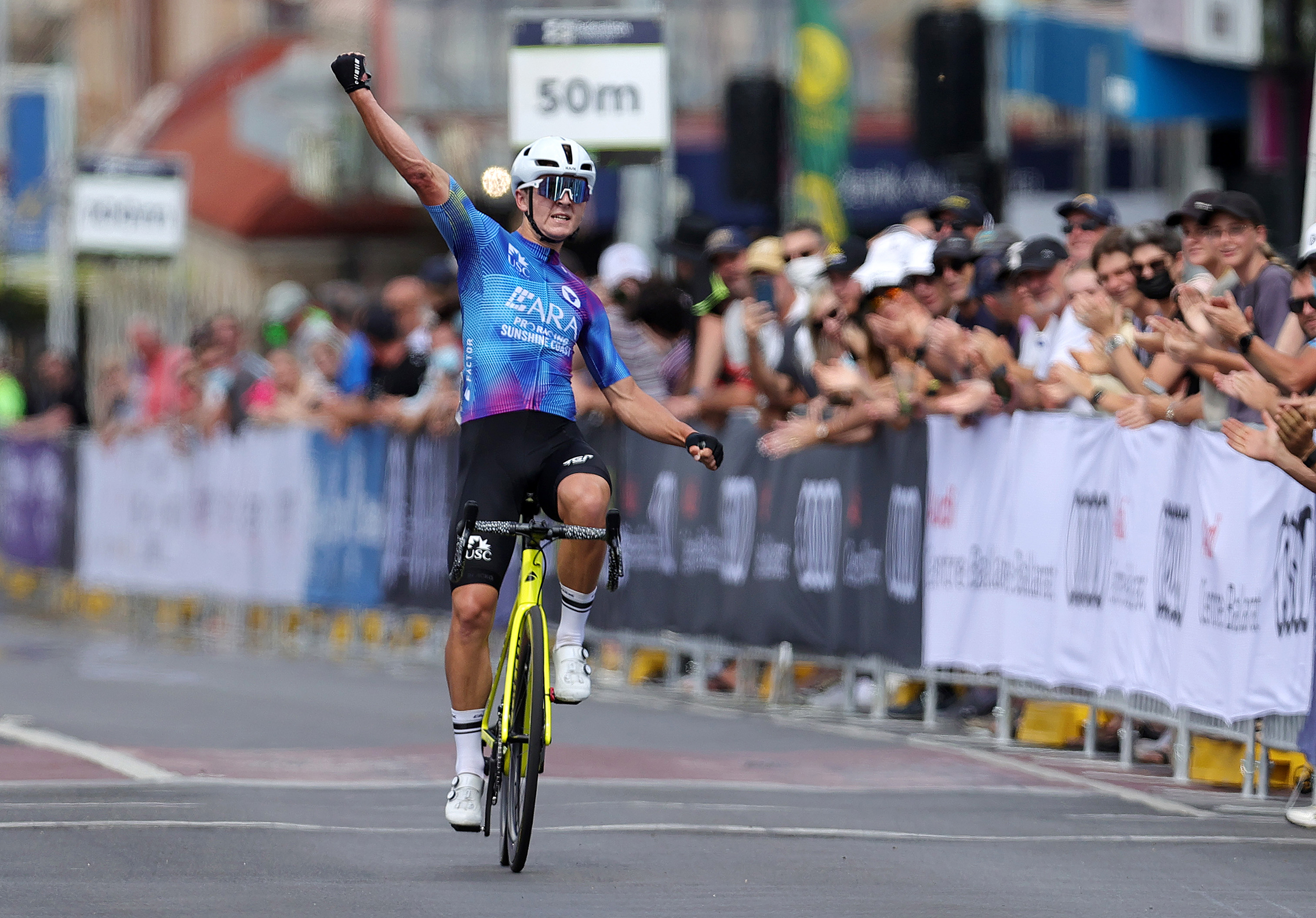