The AusCycling Junior and Masters Road National Championships travel to Shepparton, Victoria for 2023 and will be held from September 21-24. 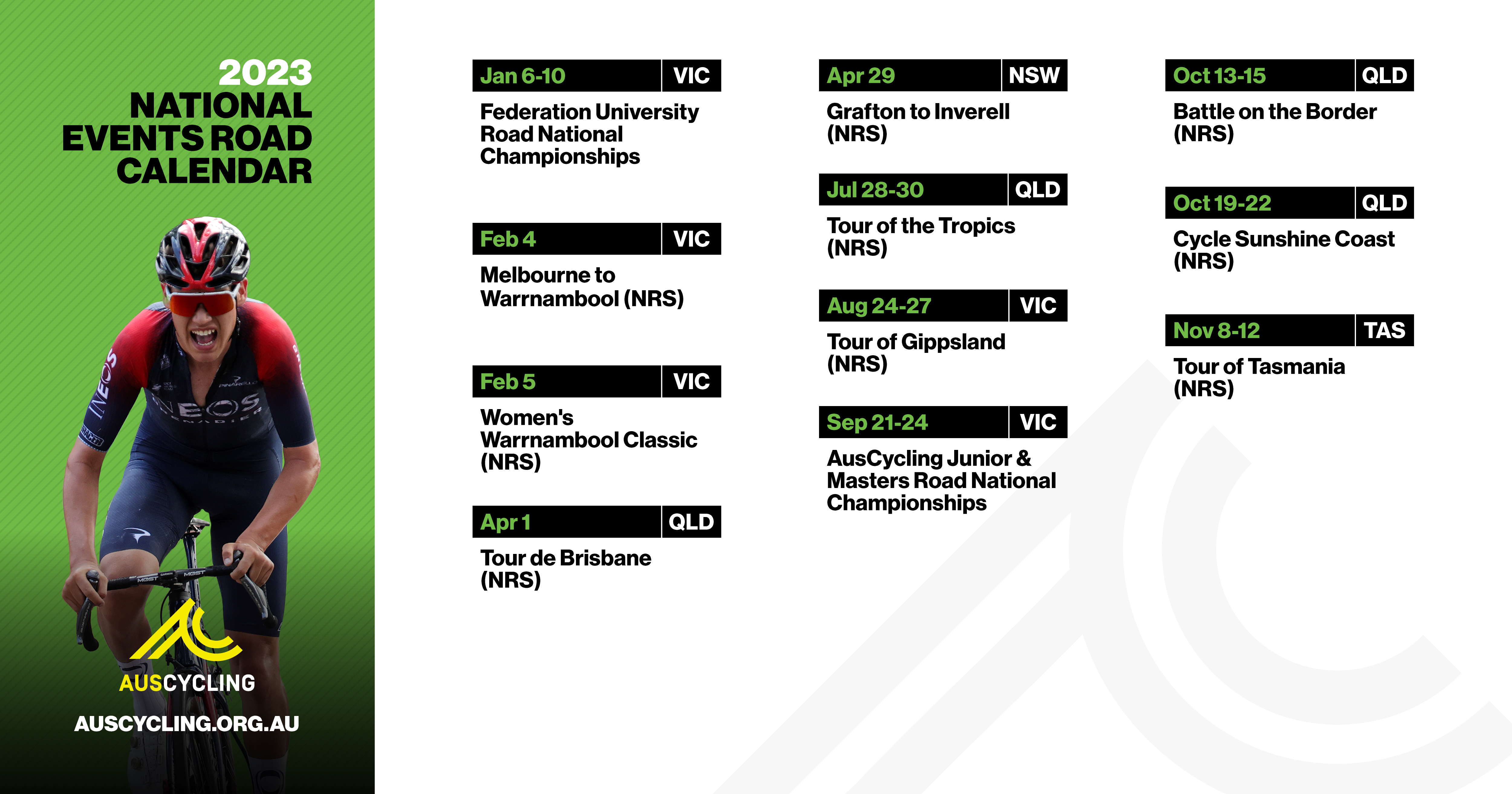 The 2023 NRS season will be contested over eight rounds for both the men and women, starting on the first weekend of February with the second oldest one-day race in the world in Melbourne to Warrnambool and the second Women’s Warrnambool Classic, after a successful inaugural running of a standalone women’s race in 2022.

The NRS season then weaves its way throughout Queensland, New South Wales and Victoria from April to October before concluding at the Tour of Tasmania in early November.

Both events double as a qualifying opportunity for the annual UCI Gran Fondo World Championships, set to be held in Glasgow, Scotland in 2023.

State and territory favourites such as junior racing series, elite team series, and iconic handicaps and regional tours all comprise part of AusCycling’s extensive road race offering for 2023, with full series details to be released in the coming weeks.

Around the states and territories

After a disruptive 2022 season, we are giving the New South Wales (NSW) calendar a new look and feel including not one but two senior open tours (the first held in NSW in over a decade).

We open our season with racing at both ends of the state: the Gravel n Granite, set to grow in the second edition to host the first NSW Gravel Championships; the Tolland Open Weekend, returning to a two-day, two-handicap format and the iconic Orica Classic continues as a key part of the calendar.

On top of a returning NSW/ACT Junior Road Series which proved popular in 2022, we will be launching the new Tour of Orange and the Manning Valley Family Tour.

Other changes include the NRS Grafton to Inverell moving into April, a new weekend pairing (NSW Criterium Championships, Ken Dinnerville Memorial and Barbara Wyles Handicap) featuring the recent Wollongong National Championships course, and the Goulburn Great Divide returning to the mega-format of 2020, hosting the road championships for under-19 up to masters.

This year we are focused on building up the existing events that were delivered in 2022 with 2023 dates for both ACT and NSW having been planned in cohesion to allow for growth in entries and management of resources required to deliver the events.

The Canberra Junior Tour will again feature on the NSW/ACT Junior Road Series. 2023 also sees the Hayman Classic (formerly the Uriarra Roubaix) step up to the open level and will feature as the epic season opener.

Hats off to Canberra Cycling Club’s Steve Crispin for his pivotal work toward the rebranding of this great event.

Queensland is once again hosting a range of major events including the ever-evolving Brisbane Cycling Festival, which in 2023 includes not only the Oceania Road and ITT Championships and the Tour De Brisbane Gran Fondo, but additionally King Street will play host to the Elite Queensland Criterium Championships during the festival.

We again host three rounds of the NRS courtesy of the Tour De Brisbane, Battle on the Border and Cycle Sunshine Coast, and look to supplement this racing with the Queensland Road Team Series (QRTS), the Queensland Classic Road Series (QCRS) and a new look weekend of criterium racing.

Adding to this are multiple junior tours and road racing events in Queensland, highlighting the Sunshine State is going from strength to strength.

Tasmania is looking to continue building the profile of our suite of state championship events in Tasmania to complement the existing calendar of road events in conjunction with our club partners within the state.

Tasmania looks forward to once again hosting the Tour of Tasmania in November 2023, a great showcase of the sport, and one that is embraced by the cycling community.

Road racing in South Australia has seen several significant changes in recent years, not least of which is due to the incorporation of the Adelaide Hills Cycling Club (AHCC).

The AHCC not only kick off our major road events for the year with their Tour of Goolwa in February but run regular club racing fortnightly or thereabouts in the picturesque Adelaide Hills.

Juniors get to race the excellent South Coast Junior Tour in late April, a great race to have back on the calendar for a second year after a few years away.

By way of handicaps, we see both the Tour of the Riverland and the 100 Mile Classic held in May, and we'll return to Mypolonga for the State Road Championships in August – fast becoming a crowd favourite as it develops into a classic on the South Australian road calendar.

The John Venturi/Sue Spencer Road Races lead into spring before we get underway with the Super Series in 2023.

With this year's edition still underway, details about the 2023 Super Series will become available early next year.

The Boxing Day Crits at Glenelg close out the year's road racing in style, bringing to a close what is sure to be another year of great road racing in South Australia.

Victoria will kick off the 2023 road season with the traditional Bay Crits on New Year’s Day.

After the successful addition of the Junior Criterium Championships at the 2022 edition, Masters riders can battle it out for the Criterium State Championship medals in front of a big crowd at the Bay Crits.

After a busy period of national and international events in January, riders will turn their focus to the Melbourne to Warrnambool Cycling Classic, which will once again feature the Port Campbell to Warrnambool handicap for riders preferring a shorter distance.

The three-stage Mansfield Tour will once again launch the 2023 Victorian Road Series in early March, followed by the Baw Baw Cycling Classic a couple of weeks later.

The Victoria Road Series (VRS) will see a new addition to its calendar, bridging the gap between autumn and spring, with further details announced shortly.

The second half of the VRS season will include Ronde van Taminick, Fred Icke and the Tour of Bright.

No changes have been made to the Victorian Junior Road Series: The Alpe de Buffalo, Ararat Junior Tour, Broadford Junior GP and Eildon Junior Tour will offer a variety of terrain and racing opportunities for our junior riders before heading to Glenrowan for the 2023 State Junior Road Championships.

Great news for our time trial specialists: the Victorian Time Trial Series will be held again in 2023 seeing the comeback of the popular Geelong ITT.

The Senior Road State Championships will undergo a slight change to its format.

The Individual Time Trial Championship will be held in Glenrowan on the same days as the junior event in mid-August.

2022 saw a strong rise in participation across the junior and masters divisions.

2023 will see the start of the Western Australia Criterium Series starting on November 22, with a round being held each month by one of five host clubs.

We are also working towards a road series in 2023 for Western Australia.