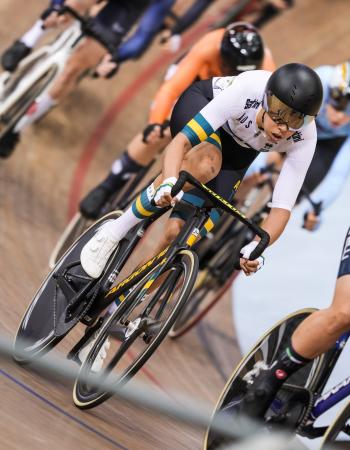 Baker was a multiple junior world champion in 2011-2012, and made her elite World Championships debut in 2016, where she finished fifth in the team pursuit and was just one final sprint win away from the podium in the points race.

Those results booked Baker a spot to her first Olympic Games, however a training crash on the eve of the Rio 2016 Games cruelled Australia's chances of a podium finish in Rio. Gallantly, Baker lined up in all three of the team’s rides as the team eventually defeated Italy to claim fifth.

At the 2019 UCI Track World Championships in Poland, Georgia teamed with Ashlee Ankudinoff, Alex Manly, Annette Edmondson and Amy Cure to win the team pursuit before winning silver with Cure in the Madison.
​
During the 2019-20 World Cup season, Georgia excelled with three Madison gold medals and team pursuit gold and silver while also claiming the 2020 Madison national title (with Ankudinoff).

At the 2020 UCI Track World Championships in Germany, Georgia teamed with Ankudinoff, Edmondson, Maeve Plouffe and Cure to finish fifth in the team pursuit before a crash halted her chances of a podium in the omnium.

Baker made her second Olympic Games appearance at Tokyo 2020.

2022 is Baker's neo-pro season with Team BikeExchange-Jayco on the UCI Women's WorldTour.

At the Birmingham Commonwealth Games, she won three gold medals: in the team pursuit, points race, and road race.