Australia has won the bronze medal in the team time trial mixed relay at the UCI Road World Championships in Wollongong today.

Six riders – three men and three women – compete for each nation in the unique event, which is rarely seen outside a world championship and has only been held since 2019.

Australia was the sixth of 16 nations to start on a grey, gusty Wednesday afternoon.

Alexandra Manly, Sarah Roy and triple Commonwealth champion Georgia Baker (who was celebrating her birthday) brought Australia home in 34:25.57 to take the provisional lead by over four minutes.

However, the strongest nations were yet to come, so the Aussies settled into the leaders’ hot seat to see whether their time would hold. 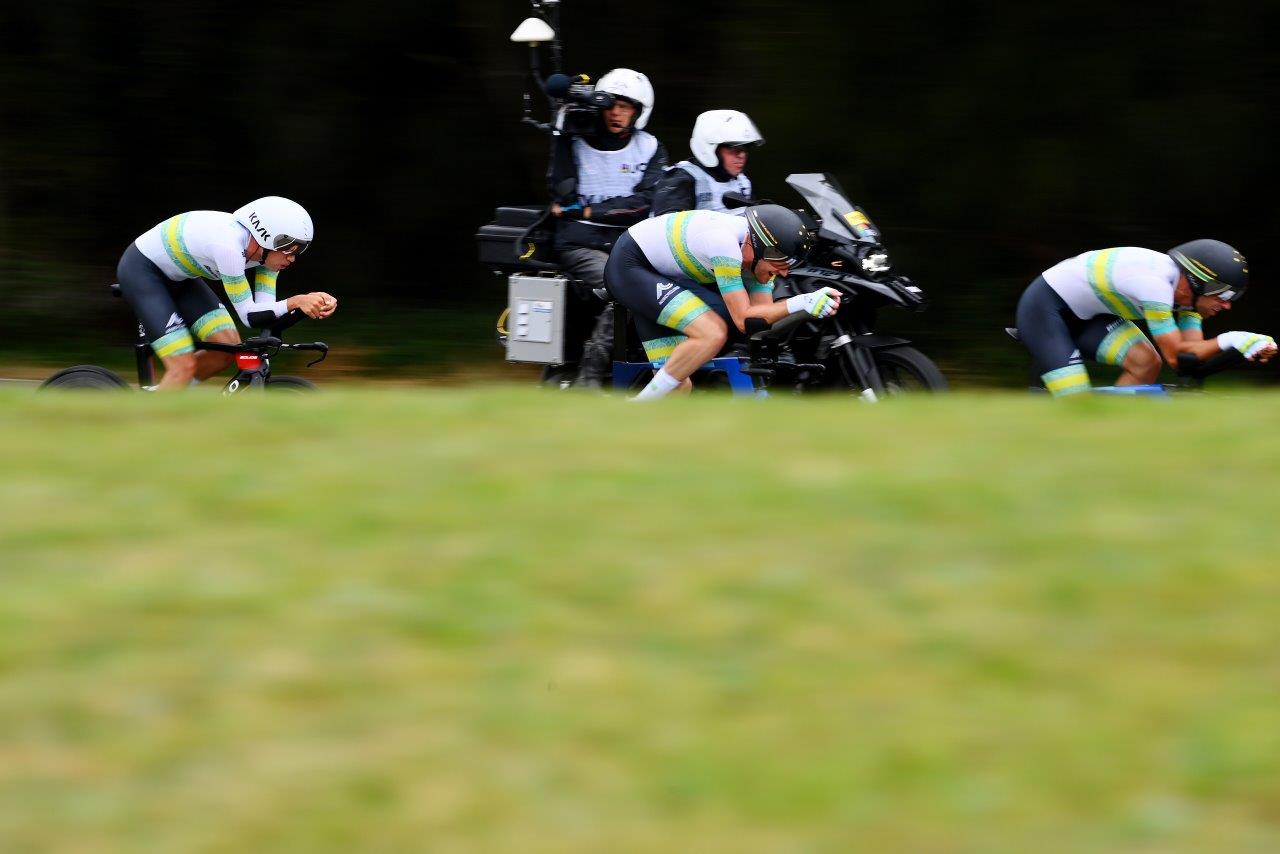 First came France and Denmark, whose men were faster at the halfway mark, but who slipped behind Australia by the end of the women’s leg.

On the ground at Wollongong’s beachfront, the partisan crowd cheered for every red time check that meant Australia had survived another challenge.

Then came the powerful Swiss team. Stefan Bissegger, Mauro Schmid and Stefan Kung handed the Swiss women a firm advantage at the halfway mark, and Australian hopes began to waver knowing the strength of the Swiss women to come.

Italy’s men slotted in 10 seconds behind the Swiss, putting the Azzurri firmly into the medal race.

The Swiss women dropped main engine Marlen Reusser in the final kilometres, but Nicole Koller and Elise Chabbey were able to drive them home in a time of 33:47.17, ousting Australia from the hot seat.

The new race leaders had to wait nervously as Italy’s Elisa Longo Borghini and Vittoria Guazzini sprinted for gold, but the Swiss time, famously unwavering, stood firm by a handful of seconds. 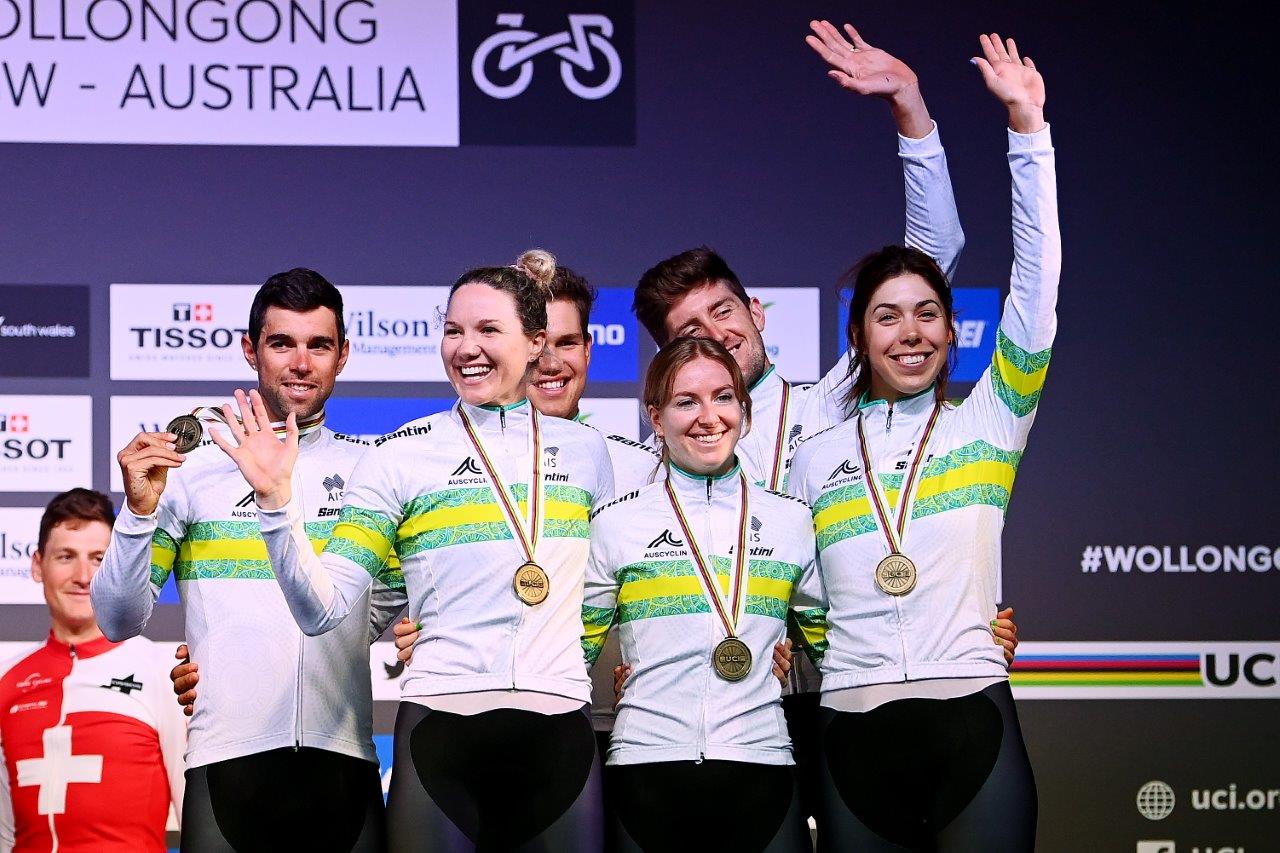 This was Australia’s first-ever participation in the mixed relay team time trial, and its third medal of these world championships after Grace Brown and Hamish McKenzie won silver medals in the individual time trial.

“It’s really special,” said Durbridge, for whom this was his first event of these World Championships.

“I think the mixed relay is a really good way to start the championships for us. Having some success is great in Australia.

“The crowds were fantastic today and we’re really happy to come away with the bronze medal.”

Durbridge said thanks to their experience in the discipline, Australia’s men were able to work well together despite a lack of specific preparation as a trio.

“It’s quite tricky to all get together during the season. For the men’s team, yesterday was our first session together, so three laps was enough.

“We’re pretty dialled for team time trials, we do a couple of them throughout the year. Me and Michael have worked together for many years, so we know each other pretty well. And Plappy, also, has done a lot of team pursuit work on the track.” 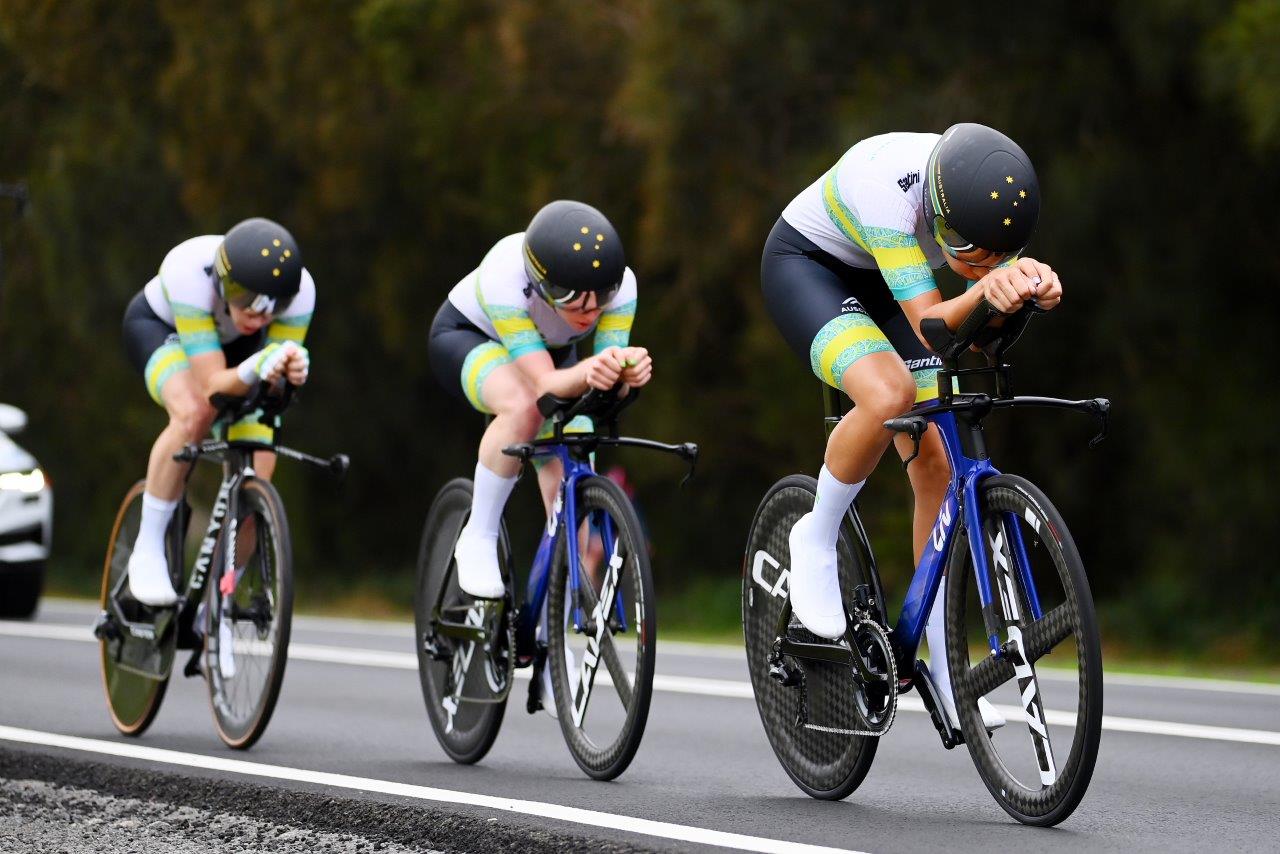 Roy also pointed to her teammates’ experience in the team pursuit, a discipline in which Manly and Baker have been world champions.

“I think we’re really lucky as a nation to have a lot of experience in team time trial and team pursuiting,” Roy said.

“Georgia and Alex are really experienced in those areas and they’ve worked together a lot over the years. Alex and I have been teammates for a number of years on GreenEdge. We all know each other well.”

Meanwhile, pre-race favourites the Netherlands endured a ride to forget. First, they lost Bauke Mollema early in the men’s leg when he dropped his chain, forcing a bike change that eliminated him from the race. Bad went to worse when the Dutch women started, as multiple world champion Annemiek van Vleuten crashed almost immediately from what appeared to be another mechanical issue.

“Honestly, I just feel bad for her,” said Manly, who has been a trade teammate of van Vleuten’s.

To learn more about the green-and-gold campaign at Wollongong 2022, read the Australian guide to the 2022 UCI Road World Championships.