After competing at the 2016 Rio Olympics, Turner fell out of BMX Racing for several years, and with young riders like Izaac Kennedy emerging behind him, a return to the top step of the podium seemed difficult.

However, in a return to form, Turner has claimed the Elite Men’s 2022 AusCycling BMX Racing National Championship with a stunning last half-lap to edge out Max Cairns and Matt Krasevskis, and backing up his win yesterday in the AusCycling BMX National Round.

The Olympian was emotional following the victory, revealing it was among the biggest of his career.

“I’ve never won an Elite National championship before. I’ve come close a couple of times and been out of the sport for a couple of years, so coming back and getting that one today, it does mean a lot. Especially now I’m 28, I knew there wasn’t too many left in the bag, so there’s a lot of emotions. It’s amazing,” Turner said. 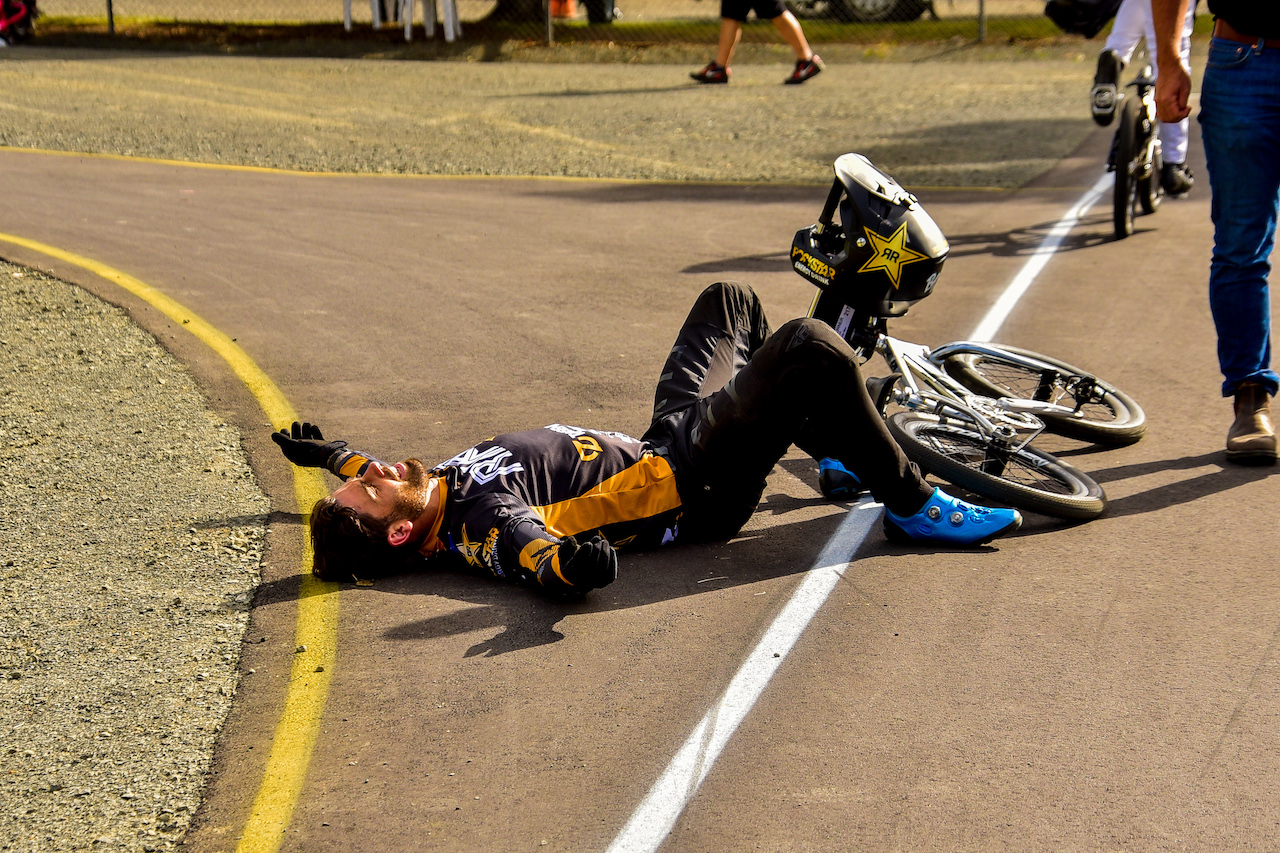 Turner also revealed how earlier races yesterday and today played a role in his come-from-behind finish.

“I’d been in that exact position multiple times yesterday and today, and certainly behind Hayden [Fletcher] as well. I knew if I wasn’t going to get around him, I was gone, so I just committed everything,” Turner said

“Also copped a little bit of a bar in the last corner on the hip, and I was a little concerned because the tyre slid out the second moto. But it held on, and I just tried to stay smooth down the last straight and hold back the tears, and got to the line.”

In the women’s competition, Saya Sakakibara has cemented herself as one of the best BMX riders of her generation, with a second straight Elite Women’s National Championship.

The Olympian continued her undefeated streak this week, with flawless runs through the first two motos and a comprehensive start to finish victory in the final moto, leading Des’ree Barnes and Ashleigh Gunn to the finish.

Despite her clear edge over the competition this week, the 23-year-old said it still gave her enormous pride to be able to earn the national champion sleeve in a busy week.

“I don’t think it feels any different [to last year] … just being able to win another elite national title is awesome, and I think I really do take a lot of pride in wearing the sleeve the following year at the World Cups. I really wanted that, so it feels great. I’m very happy,” Sakakibara said.

Sakakibara has been one of the highlight attractions in Launceston, and has given up much of her time between races to interact with young fans, and the Olympian admitted the chance to connect with fans had been “amazing”. 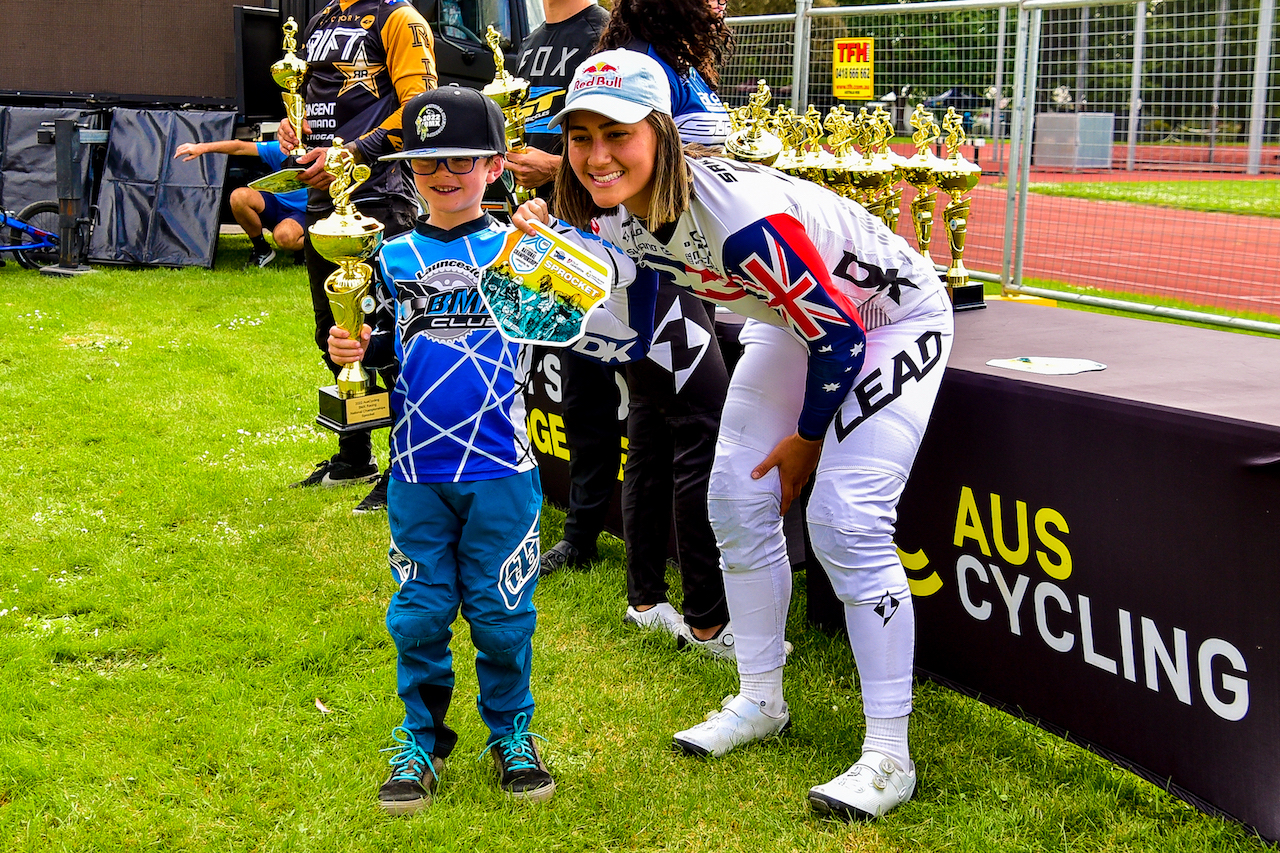 The two-time national champion also revealed how she maintains her motivation and focus, despite the distractions and her continued dominance this week.

“I think it’s really important to be able to switch on moments before the race, then recover the best we can, and then switch off. When I’m in that switched off phase, I’m happy to take photos and interact with the kids. That’s what I’m here to do,” Sakakibara said.

“As soon as I think, ‘oh, it’s just a national race,’ or ‘it’s fine, I’ve won the last two,’ that’s when I start doing a bad gate or not putting 100 per cent in. Just having that constant pressure on myself to be able to perform well and do my best ride, I think that’s what makes me keep going.”

In other categories, Jesse Asmus took out a tightly contested U23 Men’s final, while Tahlia Marsh claimed the U23 Women’s crown.

Joel Marsh and Bella May continue to emerge as superstars of the future, winning the Junior Elite Men and Women’s categories respectively, while Jordan Morgan and Jaclyn Wilson claimed Masters honours.

The racing continues tomorrow, with all 20” categories, while Superclass, Junior Superclass, and cruiser titles to be decided on Saturday 26, along with the first national championships in the world of Para BMX.

More information can be found on the 2022 AusCycling BMX Racing National Championships webpage.