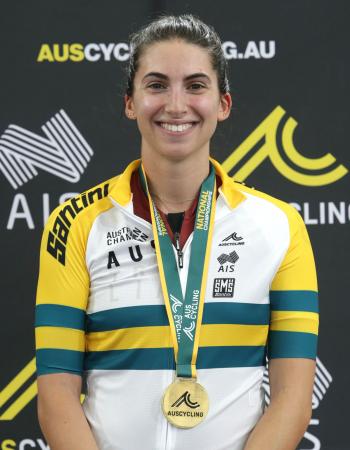 Born in Melbourne with cerebral palsy, Paige Greco was always an active and sporty child. She initially focused on para-athletics – particularly running – but switched to cycling in 2017 after missing her goal of competing at the Rio 2016 Paralympic Games.

In 2018, Greco moved to Adelaide to complete a degree in Exercise Sports Science and to focus on her cycling with the South Australian Sports Institute.

She made her phenomenal international debut at the 2019 UCI Para-cycling Track World Championships in Apeldoorn, setting three world records in two days en route to winning the rainbow jersey in the C3 500m Time Trial and C3 3,000m Individual Pursuit. She also claimed silver in the scratch race.

In 2021, Greco fulfilled her childhood dream of representing Australia at a Paralympic Games. Not only that, she had the honour of winning Australia’s first gold medal of the Tokyo Games when she blitzed the C1–3 3,000m Individual Pursuit in a world record time of 3:50.815.

Greco backed up her track success with Paralympic bronze medals in the C1–3 road time trial and road race.