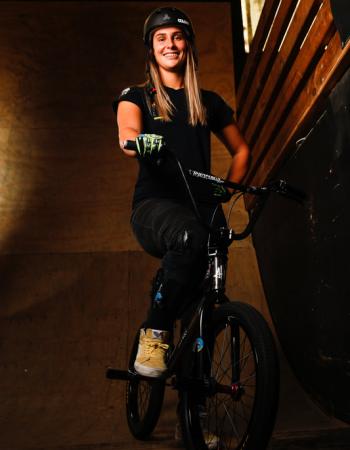 Natalya Diehm started in the sport at the age of eight years at a local skatepark on her ride home from school.

After missing the 2018 season after undergoing a fourth knee reconstruction surgery, Natalya soared in 2019, firstly winning the 2019 Vans BMX Pro Cup which featured events in the USA, Australia, Germany and Mexico.

Later in the year, while on her Australian Team debut at the 2019 Urban World Championships in China, she finished sixth.
In November 2019, Natalya won the inaugural Oceania Championships before adding a maiden National title to her resume.

In 2020 the Queensland based athlete would retain the crown and despite a fractured wrist ahead of the 2021 National Championships, Diehm would stake her claim as the premier female BMX Freestyle in the country with her third straight Australian title.

National success would see Diehm named to compete at the 2020 Tokyo Olympic Games, however two weeks before the major event Diehm ruptured her ACL in her knee but went on to compete and finished an amazing fifth in the final.