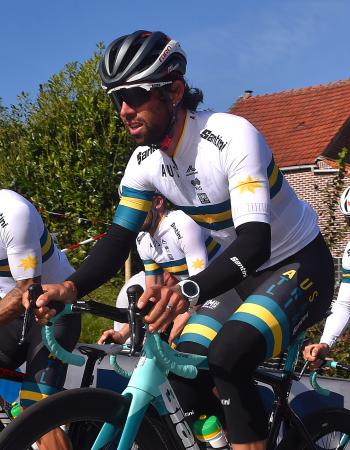 A talent identification program by the ACT Academy of Sport set a teenage Michael Matthews on course for a world-class cycling career.

The Canberran trained with the Australian Institute of Sport until his breakthrough win at the 2020 UCI Road World Championships in Geelong, where he took the rainbow jersey of under-23 road race champion.

After turning pro in 2011, Matthew established a reputation as a punchy sprinter, excelling on rolling terrain and uphill sprints.

In 2013, ‘Bling’ opened his Grand Tour account with two stage victories at the Vuelta a España. His success continued in 2014 when he won stage 6 of the Giro d’Italia and spent five days in the leader’s pink jersey.

He won another Giro stage in 2015 and stepped up his results in the spring classics, placing third in Milan–San Remo and the Amstel Gold Race. Later that year, he claimed a silver medal for Australia in the UCI Road Race World Championships in Richmond, USA.

In 2016, Matthews won a stage of the Tour de France from the breakaway, completing his collection of wins from all the Grand Tours.

More was to come: the next year, Matthews became Australian Cyclist of the Year after winning two stages of the Tour de France and the green jersey in the points classification. At the UCI Road World Championships in Norway, he won a bronze medal in the road race and the world title in the team time trial with his trade team, Sunweb.

2018 saw Matthews do a Canadian double, winning the World Tour one-day races in Quebec and Montreal. He repeated his Quebec win in 2019.

Matthews began 2022 with 37 pro wins to his name. He has ridden nine elite world championships for Australia.