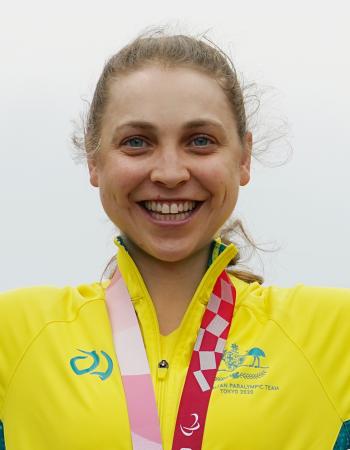 Meg Lemon sustained a brain injury when she was hit by a car while riding her bike to work. The injury permanently weakened the right side of her body.

After getting back on the bike as a form of physical and mental rehabilitation, she began enjoying para-cycling success on both road and track.

2017 was also the year she made her international debut, taking three wins at UCI Para-cycling Road World Cups and three bronze medals at world championship level.

In 2017, Lemon picked up another bronze medal in the C4 individual pursuit at the world championships.

The international podium results kept streaming in, including another three bronze medals across road and track world championships in 2019, plus silver in the scratch race.

In 2020, she won silver in the C4 individual pursuit at the UCI Para-cycling Track World Championships in Milton, Canada.

Lemon represented Australia at the 2020 Tokyo Paralympic Games, where she won the bronze medal in the C4 women’s road time trial. Lemon finished fourth in the individual pursuit, eighth in the road race and ninth in the C1–5 mixed team sprint.

She is a sports dietitian and cycling coach, holding a degree in Nutrition and Dietetics from Flinders University.