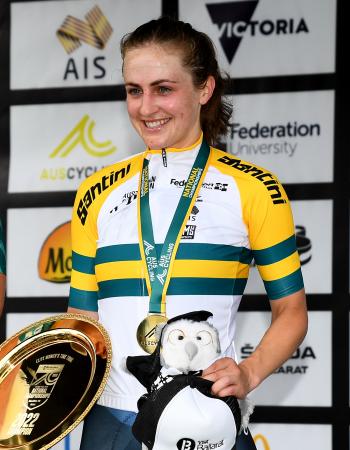 After her career in running was hampered by injuries, Victoria’s Grace Brown switched to cycling at the age of 23.

She joined St Kilda Cycling Club and raced in the National Road Series with Holden Team Gusto until a breakout 2018, when she won bronze in the road race national championship and claimed the Oceania time trial title.

Brown was awarded the 2018 Amy Gillett Cycling Scholarship, which propelled her to racing overseas with the Wiggle High5 Pro Cycling Team. In her Australian representative debut, she helped Amanda Spratt win silver in the UCI Road Race World Championships in Innsbruck.

In 2019, Brown stepped up to the UCI Women’s WorldTour with Mitchelton-Scott and was rewarded with her first elite time trial national title and a stage in the Tour Down Under.

Already known as a capable time-triallist, Brown began to demonstrate strength in one-day classics by winning the 2020 Brabantsje Pijl and finishing second at Liege-Bastogne-Liege. She also placed fifth in the world championship time trial that year.

In 2021, Brown claimed dual silver medals at the national championships before taking her first WorldTour victory with a solo attack at Brugge-De Panne. She followed that with third place in the Ronde van Vlaanderen.

Brown made her Olympic debut at the Tokyo Games, narrowly missing the podium when she finished fourth in the time trial.

In 2022, Brown returned from a shoulder injury to win her second time trial national title, along with another silver medal in the road race.