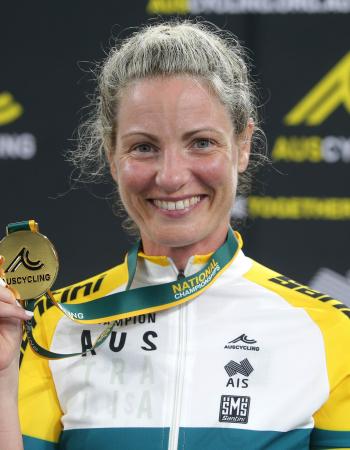 Emily Petricola had always been involved in sports, but in 2007, she was diagnosed with multiple sclerosis (MS) at the age of 27.

Petricola has described MS as an “invisible disability”; it affects every aspect of life in unpredictable, unseen ways: from tremors to sight loss to extreme fatigue and much more.

Determined to continue her sporting pursuits, in 2015 she began training with five-time Olympic cyclist Shane Kelly. Within three years, she was on a world championship podium, winning silver and bronze at the 2018 UCI Para-cycling Track World Championships.

In 2019, she took her first world title, winning the C4 Individual Pursuit in Apeldoorn, Netherlands. She followed up that year with her second set of rainbow bands in the C4 road time trial.

2020 was an even more productive year on the track for the St Kilda Cycling Club rider. She won three titles at the world championships in Milton, Canada: the C4 omnium, scratch race and another individual pursuit crown.

In 2021, Petricola became a Paralympic champion when she won gold in the C4 individual pursuit with a world record time of 3:38.061. She also picked up a silver medal in the road time trial.

Petricola is trained as an English teacher.