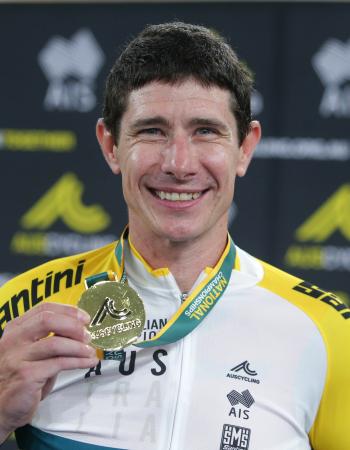 From the age of 10, Darren Hicks loved riding BMX bikes.

However, his life was upturned in 2014 when his right leg was amputated after a terrible motor accident. The brakes failed on the truck he was driving, causing it to hurtle down a freeway and crash into stationary cars, killing two people.

It was a dark time, but cycling helped him work through his grief.

Hicks initially rode using a prosthetic leg, but, at the suggestion of coach Loz Shaw, he found he could ride faster using just his left leg.

Motivated to train hard and compete at the highest levels, Hicks won his first national titles in 2017 in the C2 time trial and road race.

He earned selection to the 2017 UCI Para-cycling Road World Championships in South Africa, where he won two silver medals. The next year, he won bronze in the road race.

Hicks also began to excel on the track, winning the 2018 individual pursuit national title before taking bronze in the C1–3 scratch race at the world championships.

In 2019, Hicks became a two-time world champion. First, he won the 3,000m individual pursuit at the track world championships in Apeldoorn. Then, he earned another rainbow jersey by winning the road time trial in Emmen.

Hicks competed on both track and road at the Tokyo 2020 Paralympic Games. On the track, he won his first Paralympic medal by clinching silver in the individual pursuit.

When the competition moved to the road, Hicks fulfilled his ambition of becoming a Paralympic champion by winning gold in the 24-kilometre men’s time trial C2.