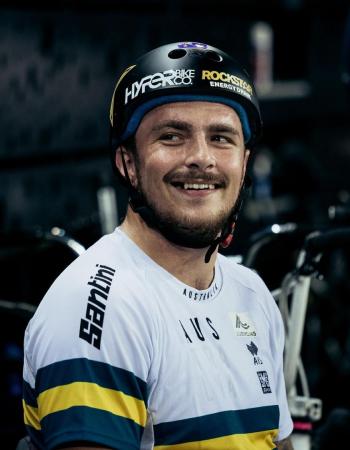 Sydney's Brandon Loupos won bronze at the 2018 UCI Urban World Championships in China, while in the UCI BMX Freestyle World Cup Season, he won gold in the opening round in April and silver in round two in May.

The season could have been even greater for him however in unfortunate circumstances, he suffered a bike mechanical in round two and had his bike stolen just three hours before the final in round three.

He enjoyed a stunning 2019 season which was highlighted by winning his maiden rainbow jersey at the 2019 Urban Cycling World Championships in China. He began the final in unfortunate circumstances, crashing on a backflip attempt in his first run. However, in a stunning second run, Loupos shot to the top of the leaderboard with a double backflip, flair whip, a 1080, a 720 into a double whip transfer and cash roll, before ending with a five flair scoring 93.20 points.

Also in 2019, recorded the highest score ever recorded at a World Cup at the first round in Japan in April. In September, he claimed gold at the inaugural Urban Games in Hungary. He also claimed dual 2019 X Games gold and finished the 2019 FISE World Series in second place overall.

Brandon won the highest prize purse in BMX Freestyle at the Japan event early 2020, but despite holding the rainbow stripes he would be unable to capture the green and gold jersey at the 2021 National Championships.

Loupus would finish with the silver at the 2021 National Championships but his Tokyo Olympic dreams were shattered when he suffered a series knee injury at the World Championships in Montpellier, France.