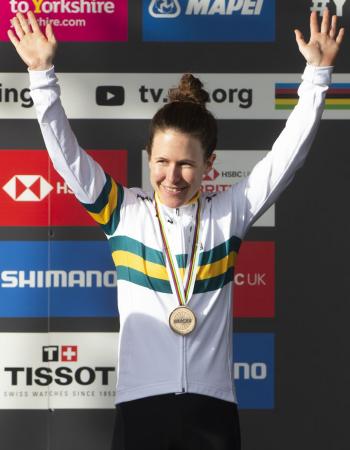 Amanda Spratt hails from the Blue Mountains west of Sydney, so it’s no surprise she excels when the road points uphill.

Spratt began as a BMX racer and competed at the 1998 UCI BMX World Championships before switching to road and track.

In 2004, she won three gold medals at the Commonwealth Youth Games and bronze in the time trial at the UCI Junior Road World Championships. After developing as a junior, she spearheaded a NSW victory in the inaugural women’s team pursuit national title in 2007 and won the under-23 road time trial national championship in 2008.

Spratt’s senior career took off in 2012 when she won the road race national championship in Buninyong, the first of three titles.

What’s followed has been a consistent stream of top results in the pro peloton, including a stage of the Giro Rosa, three stages and the overall at Emakumeen Bira, and an unprecedented hat-trick of GC victories at the Santos Women’s Tour Down Under from 2017–2019.

Spratt has also appeared on the podium at Liège-Bastogne-Liège, Trofeo Alfredo Binda, the Amstel Gold Race and the Giro Rosa overall.

In 2018, Spratt won silver for Australia in the UCI Women Elite Road Race World Championship on a climbing-heavy course in Innsbruck. She followed it with bronze the next year in Yorkshire, becoming the first Australian to win two medals in the event.