Kristina Clonan was pushed to the limit en route to winning her third-straight elite women’s sprint national championship on #TrackNats22 Sunday, stating her newest national crown was the toughest of them all.

The Queenslander was visibly fatigued after donning the national champion’s jersey, a clear indication of the energy she exerted to maintain her dominance over the women’s sprint field.

“It was definitely the hard way today, there was a lot of learning to take in,” Clonan said. 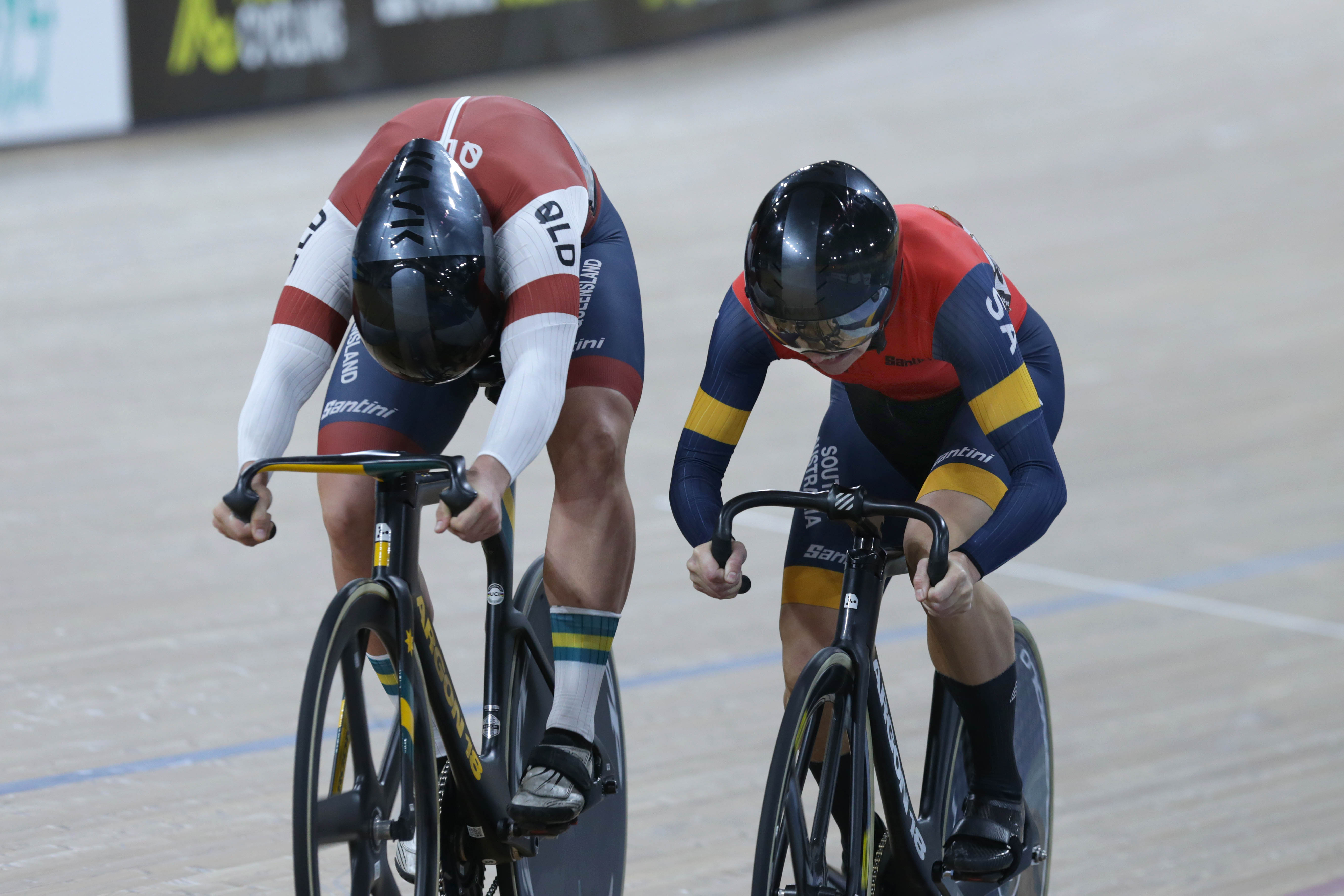 “This one is definitely different to the other ones, I really had to work for this one today so having Bree (Hargrave) there really gave me a run for my money.

“And in saying that, all the girls did, to be honest. I had a really hard quarter-final (with Selina Ho) so this one means a little bit more I think.”

The Australian Cycling Team star was never afforded an easy matchup in her journey to the gold medal final, with Ho (NSW) forcing a third race in the quarter-final due to a Clonan relegation, and young Victorian prodigy Alessia McCaig testing the defending champion’s nous in the semi-final.

A hotly contested gold medal final with Breanna Hargrave went down to the wire in the decisive third match sprint, with Clonan winning by millimetres at the finish.

“It’s definitely better (when Breanna is pushing me), we’ll probably be in a team together which makes me feel that much better about it as well to have such a strong, hungry person – it definitely is inspiring and she does make me better,” Clonan said.

“I’m keen to feed off each other and take that into a team sprint.” 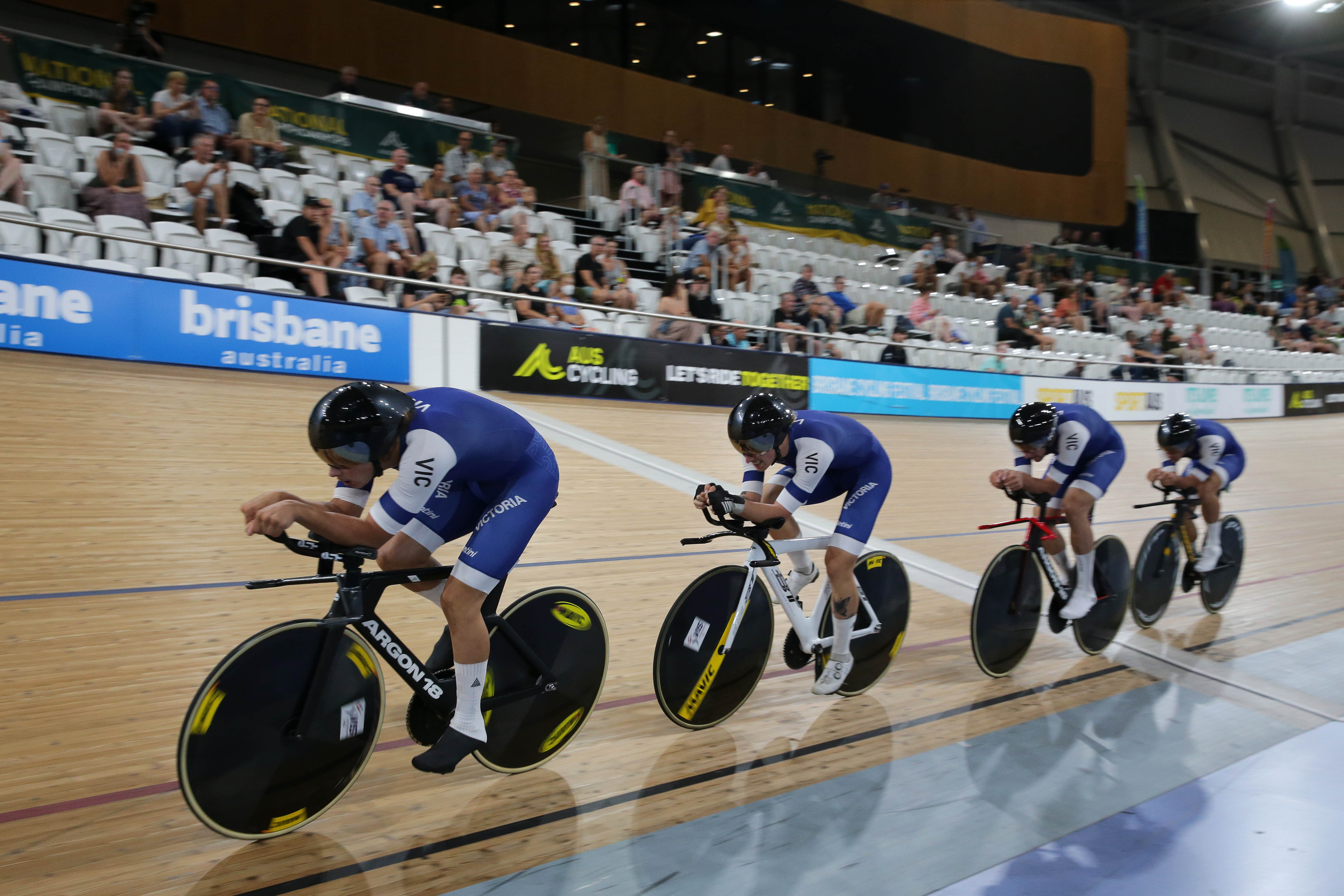 The quartet of Blake Agnoletto, Graeme Frislie, Jordan Villani and Henry Dietze (Jackson Hribar rode qualifying) were flawless in their chase of the Queenslanders, finishing with a time of 3:56.852 despite making the catch with half a lap to go.

Victoria laid the foundations for gold from the get-go in the final, placing Queensland under pressure with a rapid opening kilometre that had Queensland chasing from lap one.

The pressure placed on Queenslanders James Moriarty, Liam Walsh, Declan Trezise and Kane Richards proved too much to handle, with their line splintering in the final kilometre.

Victorian Henry Dietze was ecstatic to claim his second team pursuit national title, after not knowing he would even ride the event earlier in the day.

“We weren’t really sure if we were going to run me in the final, we had Jackson (Hribar) in the heat instead of me, and we qualified second,” Dietze said.

“It was more or less that we saw we had a good four seconds minimum that we could improve on just through little mistakes because we haven’t really ridden a whole lot together as a team.

“The aim was to go out on schedule, which was a pretty fast schedule for what we wanted to do, with the idea of putting them under pressure instead of them putting us under pressure to make them have to do chase back to us.

“They were always in our peripheral and we saw we were just getting closer and closer and never slowed down and kept on going.

“Last year we did a 3:58-something and this year we went quicker, so we were already pumped to win and then to see that time was just the cherry on top.”

Western Australia rounded out the podium in third in a nail-biting bronze medal final against South Australia. 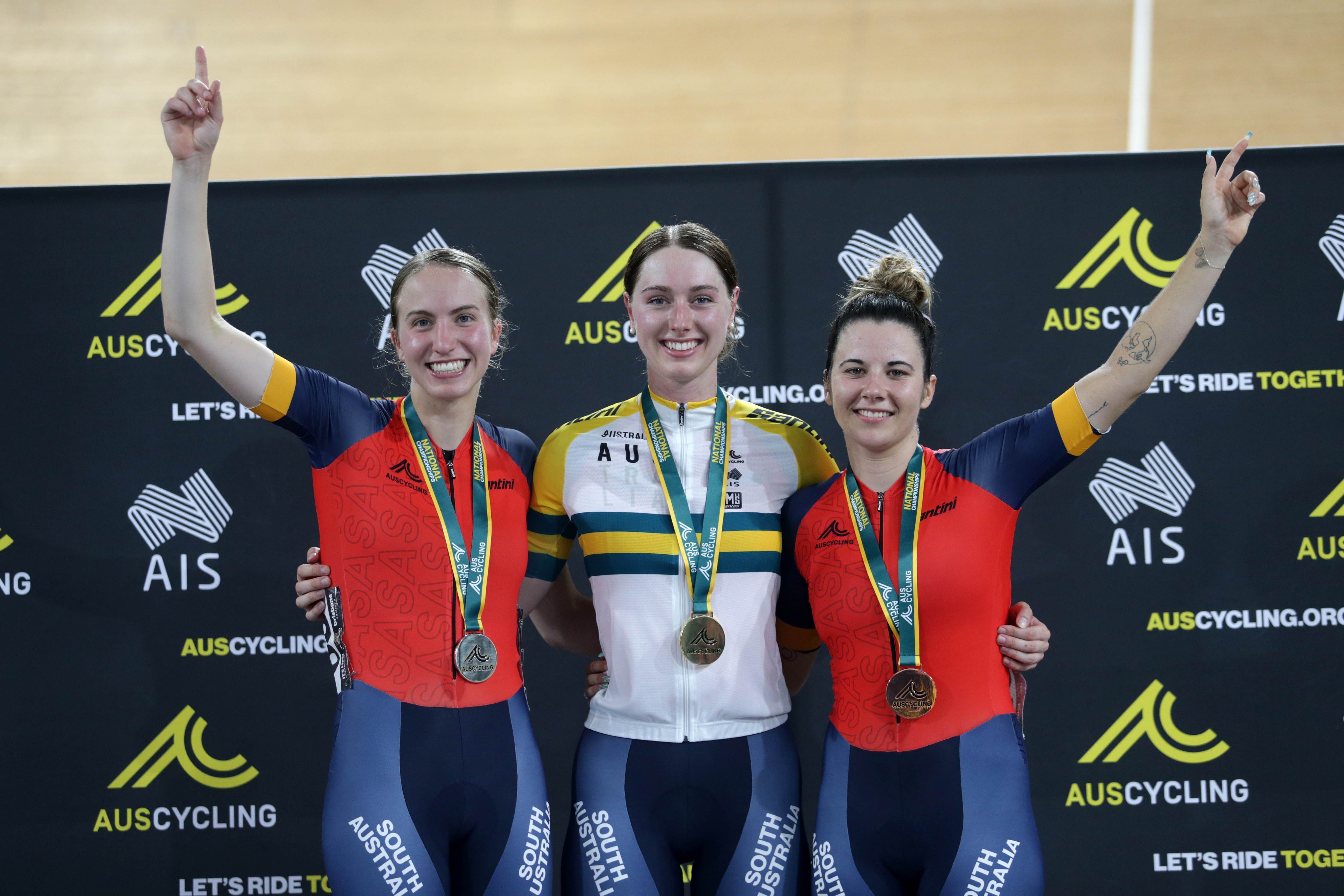 The 23-year-old had the title sewn up before the final sprint of the 80-lap points race and was joined by teammates Sophie Edwards and Nicola Macdonald on the podium.

“I’m really stoked to get this omnium win and it was actually even better that it was a full SA podium, it was pretty good to get both the other girls up there,” Moran said.

“We’re teammates but we’re not trying to ride fully as a team because it’s a limited field so we don’t want to just have one dominating state, but we obviously look after each other a bit.”

Moran was consistent and impressive throughout the day, winning the opening scratch race of the omnium before placing second in the tempo and then winning the elimination ahead of the decisive points race.

A flurry of attacks from teammate Nicola Macdonald in the points race allowed the Australian Cycling Team Podium Ready member to bide her time in the main bunch, collecting sprint points to pad her growing advantage at every opportunity.

“I think consistency is generally the key for the omnium, I was happy just to chip away throughout the day and then just carry (that) into the points race,” Moran said.

‘I knew I could win in a sprint’: Duffy earns second scratch race national crown 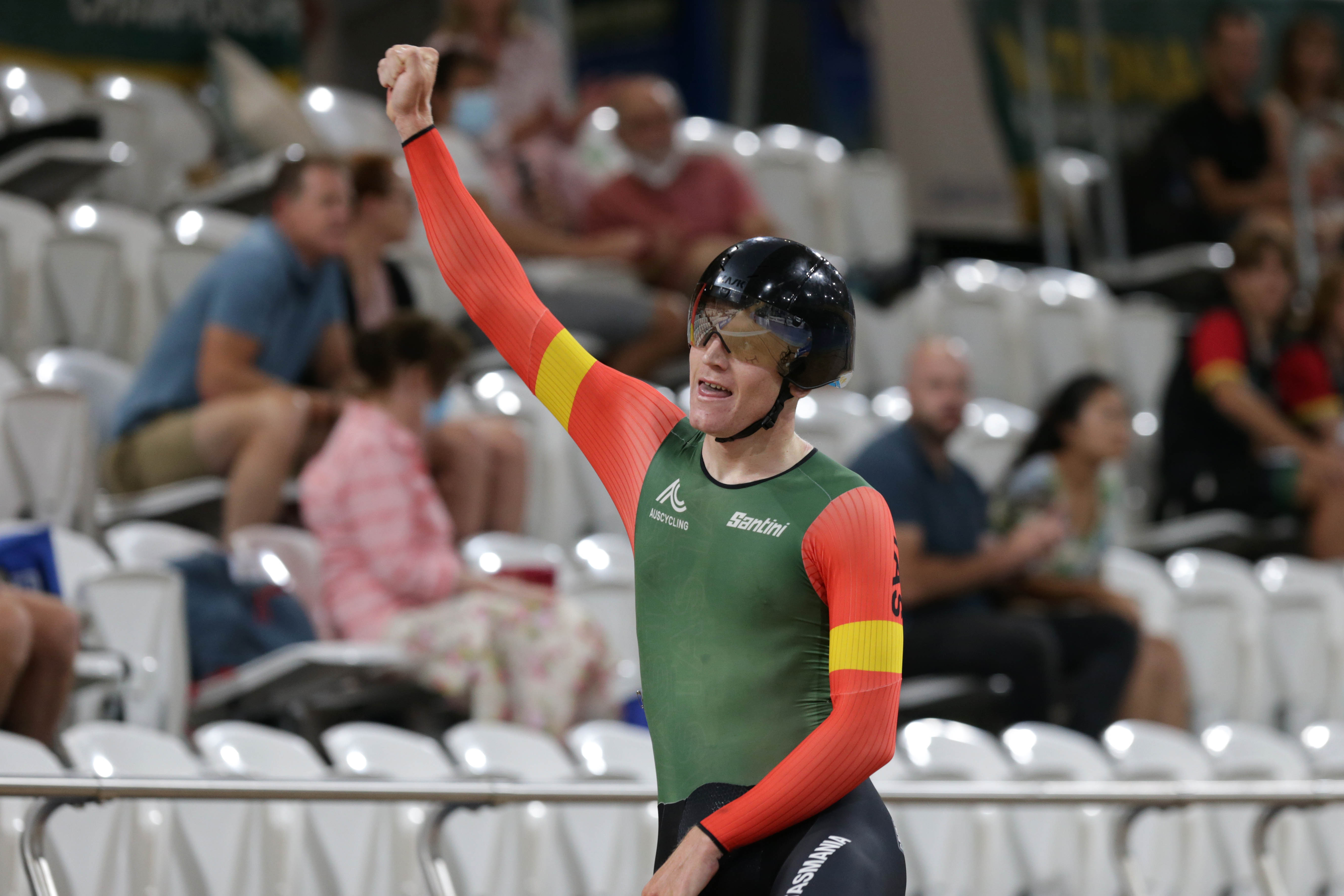 Tasmanian Josh Duffy has continued to establish himself as a bona fide elite talent on the boards at #TrackNats22, winning his second scratch race national championship on Sunday.

A patient Duffy bided his time to strike until the final lap of the 60-lap race after positioning himself perfectly four wheels behind a selfless Dalton Stretton lead-out with five laps to go.

The 21-year-old took full advantage of his teammate’s effort, sprinting to the front as the bell sounded and successfully holding defending champion Graeme Frislie (VIC) at bay.

“I wanted to back my sprint, I knew I could win in a sprint, so I just wanted to save as many biccies throughout the whole race as I could,” Duffy said.

“Dalton (Stretton) helped out pretty well at the end there by just keeping it down the track and putting a bit of pressure on with five laps to go.

“It’s a nice feeling to pull it (national champion jersey) on and silver last year didn’t feel too good, so it’s nice to get one up on Fris (Graeme Frislie) again.” 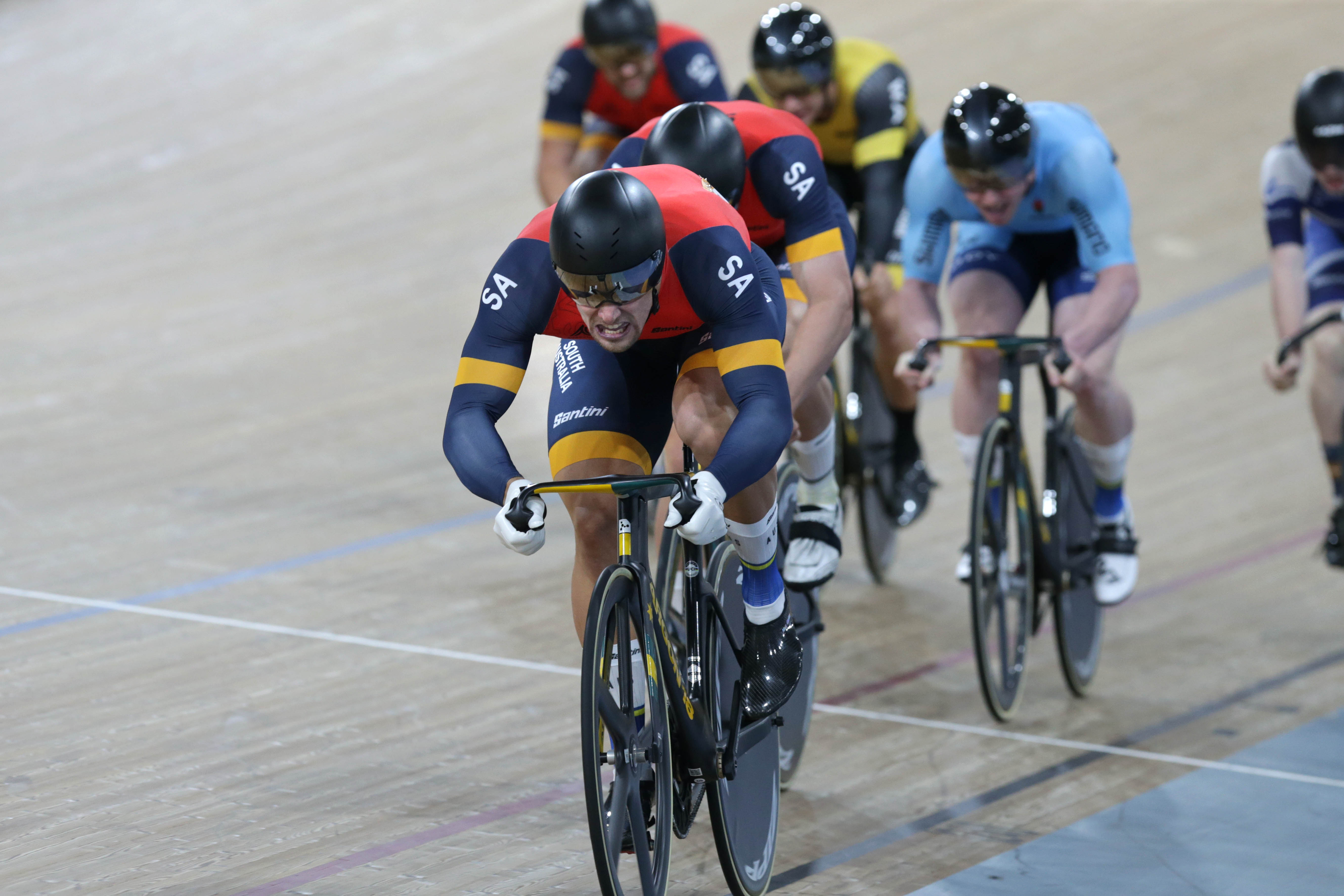 The South Australian was at his tactical best in the gold medal final, following two moves over the top of him to perfection before unleashing a lethal burst of speed on the bell lap to win his fourth keirin national championship and his first since 2018.

It is another statement ride from the 29-year-old, who is targeting gold medals at the 2022 Birmingham Commonwealth Games later this year.

“Drawing rider one in the final is never easy to win from so I knew I had to execute the perfect race from that position,” Glaetzer said.

“I was super on the serious moves that came and put myself in a good position in the serious end of the race.

“It doesn’t feel like I'm at my best yet, I’m in a lot of pain all the time but I’m going fast so I can’t complain.

“I’m in a fair bit of workload still, this is really just the first competition that I’m building into the season with so it’s very encouraging to have such strong results very early.”

Results via the official results page.