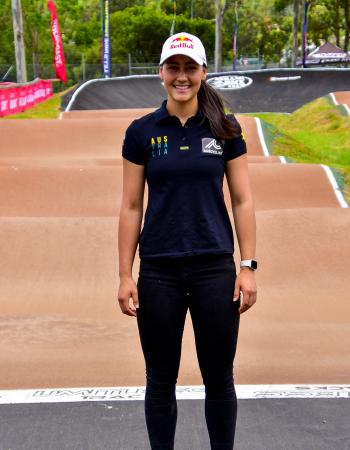 Saya Sakakibara life in BMX began at the age of four after following her brother Kai to a race. The family moved to Sydney from Tokyo in 2007 and with Kai, Saya joined the local BMX club, Southlake Illawarra BMX Club. Sakakibara had an immediate impact on the junior circuit winning multiple state and national titles.

Sakakibara made her elite World Championships debut at the age of 18 in 2018 and fought hard to make the final where she finished sixth as the youngest in the field. On top of this she finished second in the UCI BMX SX World Cup series.

During the 2019 season, Sakakibara claimed multiple top-five finishes across the 2019 UCI BMX SX World Cup rounds and for the second year in a row, Sakakibara made the final of the World Championships, placing seventh.

The highlight for the nineteen-year-old in 2019 was taking out the official Tokyo 2020 Olympic Games test event.

2020 started well for Sakakibara, placing second and fourth at the opening World Cup rounds in Shepparton.

In 2021, Sakakibara was named to the Australian Olympic Team for the Tokyo Olympic Games and missed out on the final due to a crash during the semi-finals. Sakakibara took an extended break from the sport after the crash but returned at the end of the year to take out her maiden National Championships in the Gold Coast.