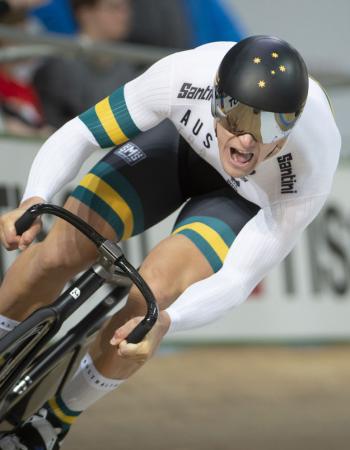 Matthew Glaetzer began his junior sporting career with a national championship silver medal in the pole vault at age 14. However, injury forced the Adelaide youngster into a new sport, and after choosing triathlon and excelling on the bike, he decided to join Central Districts Cycling Club.

Just six months later, the emerging sprinter represented Australia at the 2009 UCI Junior Track World Championships, and by the end of 2010 he had won two junior world titles.

Glaetzer celebrated success in the elite ranks with a maiden elite rainbow jersey in the team sprint (with Scott Sunderland and Shane Perkins) at the 2012 World Championships in Melbourne.

Making his Olympic debut at the London 2012 Olympic Games, the Australian team of Glaetzer, Sunderland and Perkins was narrowly beaten for bronze by Germany by 0.146 seconds.

At the 2016 Olympic Games in Rio, Glaetzer finished fourth in the sprint, fourth in the team sprint (with Patrick Constable and Nathan Hart) and tenth in the keirin.
In 2018, he achieved a memorable victory at the World Championships in Germany to claim his first sprint world title and took silver in the time trial. Glaetzer added two gold (keirin and time trial) and a bronze (team sprint with Hart and Constable) at the Commonwealth Games on the Gold Coast.

In November 2019, Glaetzer was diagnosed with thyroid cancer one month after undergoing surgery to remove the cancerous growth, and he claimed multiple medals during the 2019/20 World Cup season

At the 2021 Olympic Games in Tokyo, Glaetzer finished fourth in the team sprint (with Matthew Richardson and Hart) and fifth in the keirin.