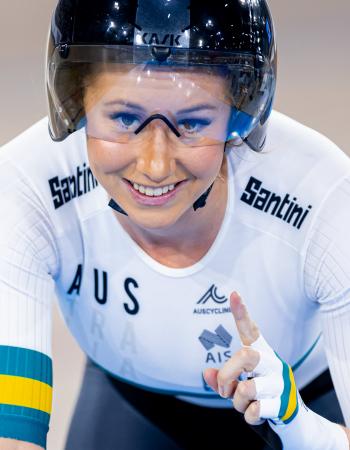 After taking up cycling in 2015 at the age of 14 after previously taking part in long distance ocean swimming, Adelaide's Maeve Plouffe (born 8/7/1999) claimed a number of medals on both the road and track in the under-17 ranks.

She made her debut in the green and gold for Australia at the 2017 UCI Junior Track Cycling World Championships, finishing in the top six in the team pursuit and Madison.

In her first year in the elite ranks in 2018, Plouffe was part of South Australia's national championship winning team pursuit squad.

Plouffe then joined the Australian Cycling Team’s Podium Potential Academy for its inaugural class in late 2018, and during the 2018-19 season she claimed three national titles - the team and individual pursuits and the Madison.

While on her elite World Championships debut in February 2020, Plouffe claimed a top ten finish in the 3000m individual pursuit, clocking 3mins 26.742secs for the 12-lap event, bettering her then personal best by five seconds.

Plouffe made her Olympic Games debut at Tokyo 2020, competing in the team pursuit team that finished fifth.

In 2022, Plouffe joined the exclusive sub-3mins 20secs individual pursuit club, stopping the clock at 3mins 19.994secs to become only the third woman in history to do so.