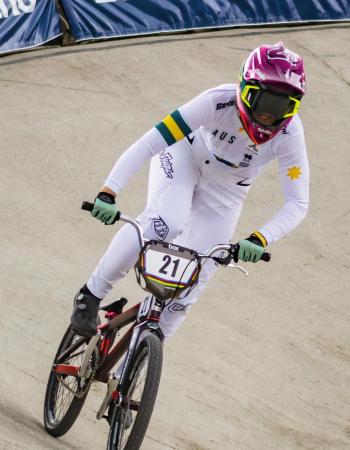 Born in Western Australia, Lauren's hometown club was Bunbury BMX club competing in basketball and cycling as a kid.  Lauren began to make a big impact on the Australian BMX scene, her first major year in elite BMX, Lauren grabbed second in the National Championships, eleventh in the World Championships and third in round 3 of the World Cup.

On her twenty-first birthday, Reynolds was selected to represent Australia at the Olympics in London and in her debut Games finished fifteenth and came off the back of a bronze medal at the test event.

Post London, Reynolds continued to impress with a silver medal at the 2013 World Championships in Auckland, a handful of finals in World Cup rounds and a win in the Oceania Championships in 2015. After making the final of the 2016 World Championships, where she finished eighth, she headed to her second Games in Rio. She lined up alongside fellow Aussie Caroline Buchanan in her semi-final in Rio as she finished 7th, 6th and 4th in the three races to miss out on the final and claim 11th overall.

Reynolds has been consistent since her debut in BMX, now residing in San Diego, she has taken out several domestic races in the United States of America, admitting her favourite tracks are the flat tracks found in America.

Ahead of the original date for the Olympics, Lauren finished ninth at the 2019 World Championships and made the final in both rounds of the opening World Cup rounds for 2020 in Australia.

In 2021, Reynolds was named to a third Australian Olympic Team, the first Australian BMXer to achieve this milestone where she placed fifth, the highest ever finish for a female at the Olympics in BMX. One month later, the number five in the world backed this performance up with an impressive World Championships run, placing fifth, her best result since a silver medal in 2013.