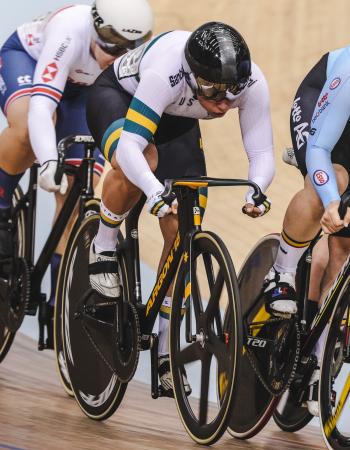 Kristina Clonan has transitioned from the Australian Cycling Team’s endurance program to reinvent herself as a world-class track sprinter.

As a junior, the Sunshine Coast native won the 2015 Junior Oceania Road Race Championships and took bronze in the scratch race at the 2016 Junior Track World Championships.

She continued her endurance trajectory by winning the elite Madison national title in 2018, tasting World Cup success with the Australian team pursuit squad, and winning the under-23 criterium national title ahead of Ruby Roseman-Gannon.

After missing selection for the Tokyo Olympic Games, Clonan changed her focus to track sprinting.

The results came quickly when the Queenslander won the 2020 elite women’s sprint, keirin and time trial national championships. Proving it was no fluke, Clonan successfully defended all three crowns in 2021.

At TrackNats in 2022, Clonan rode under 33 seconds in a 500-metre time trial for the first time. Once again, she swept the individual events to retain all three Australian champion’s jerseys.

In May, Clonan broke through at the world level with a gold medal in the time trial at the UCI Track Nations Cup in Milton.

Clonan is completing a Bachelor of Business at Griffith University, majoring in property development and real estate management.