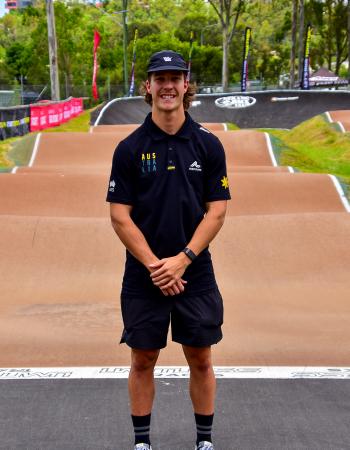 Born in the Sunshine State, Izaac Kennedy has made a quick rise to the top of Australian BMX after he notched his maiden elite men's national title at the Australian national championships in 2019 at the age of 18.

Izaac made his World Championships debut later that year and fought his way to the quarter finals.

The 20-year-old finished on the podium in his first World Cup final at the back end of 2019 and followed this up in 2020, finishing third in the opening round of the World Cup.
After a disrupted 2020, Kennedy started the year hampered by a broken hand, but the Nerang BMX Club rider rallied and finished fourth in his first World Cup round in over a year. A few months later, Kennedy proved himself on the world stage, making his first evert World Championship final and placing seventh.

Kennedy finished off the year in style, taking out his second national championship and the first to go back-to-back in over 20 years.