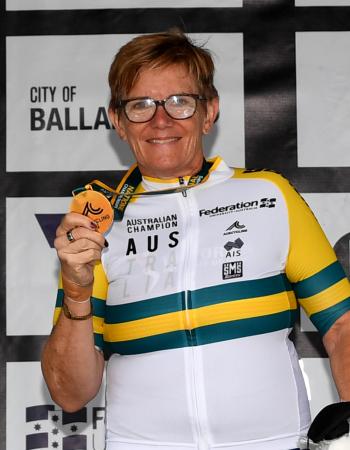 Born in 1961, Carol Cooke was a talented swimmer but failed to reach the Olympics when her native Canada boycotted the 1980 Moscow Games. She worked as a police officer for 14 years, including a stint undercover with the drug squad.

In 1994, she moved to Australia with her husband. She was diagnosed with multiple sclerosis in 1998.

In 2006, Cooke took up rowing, but her team narrowly missed qualification for the Beijing 2008 Paralympics.

She switched to para-cycling, aiming for the London 2012 Paralympics. She represented Australia at the 2011 UCI Para-cycling Road World Championships, where she won two silver medals.

The next year, she not only achieved her goal of competing at London 2012, but won the gold medal in the T1–T2 mixed time trial.

What followed was a period of domination in the women’s T2 tricycle classification.

In 2013, Cooke became a dual world champion, winning the T2 time trial and road race. She defended both titles in 2014 and won a third consecutive time trial in 2015 (taking silver in the road race).

In 2016, Cooke won two gold medals at the Rio Paralympics: the time trial and road race.

At the 2020 Tokyo Games, Cooke took silver in the T1–2 time trial but crashed out of the road race. At 60 years old, she was Australia’s second-oldest female Paralympic medallist.

Besides her athletic achievements, Cooke is a motivational speaker, author, and founder of a swimming event that raises funds to support people with multiple sclerosis.