AusCycling has named the six Australians who’ll compete in the 2022 Tour de l’Avenir, the premier road cycling stage race for under-23 men.

The ‘Race of the Future’ is seen as a mini-Tour de France for up-and-coming riders. Recent winners include grand tour champions Tadej Pogačar, Egan Bernal and Nairo Quintana, while legends of the sport such as Miguel Induráin and Greg LeMond have also won it.

Australia will be one of 23 national teams in action alongside two French regional teams.

Here’s what you need to know about the 2022 Tour de l’Avenir.

This year, the Tour de l’Avenir will run from August 18 to 28, traversing a west-to-east route across the middle of France, like a waistband.

You can sum up the ten stages as follows:

In total, the peloton will cover 1,137 kilometres.

The race saves its toughest test for the end: over 9,000 vertical metres need to be climbed over the last three alpine days.

The general classification will surely be decided on the mountaintop finishes of the Col de la Madelaine (stage 7) and La Toussuire (stage 8), if not the final stage, which includes the Col de l’Iseran.

The 28-kilometre team time trial on stage 5 will also be a key test in the overall battle. 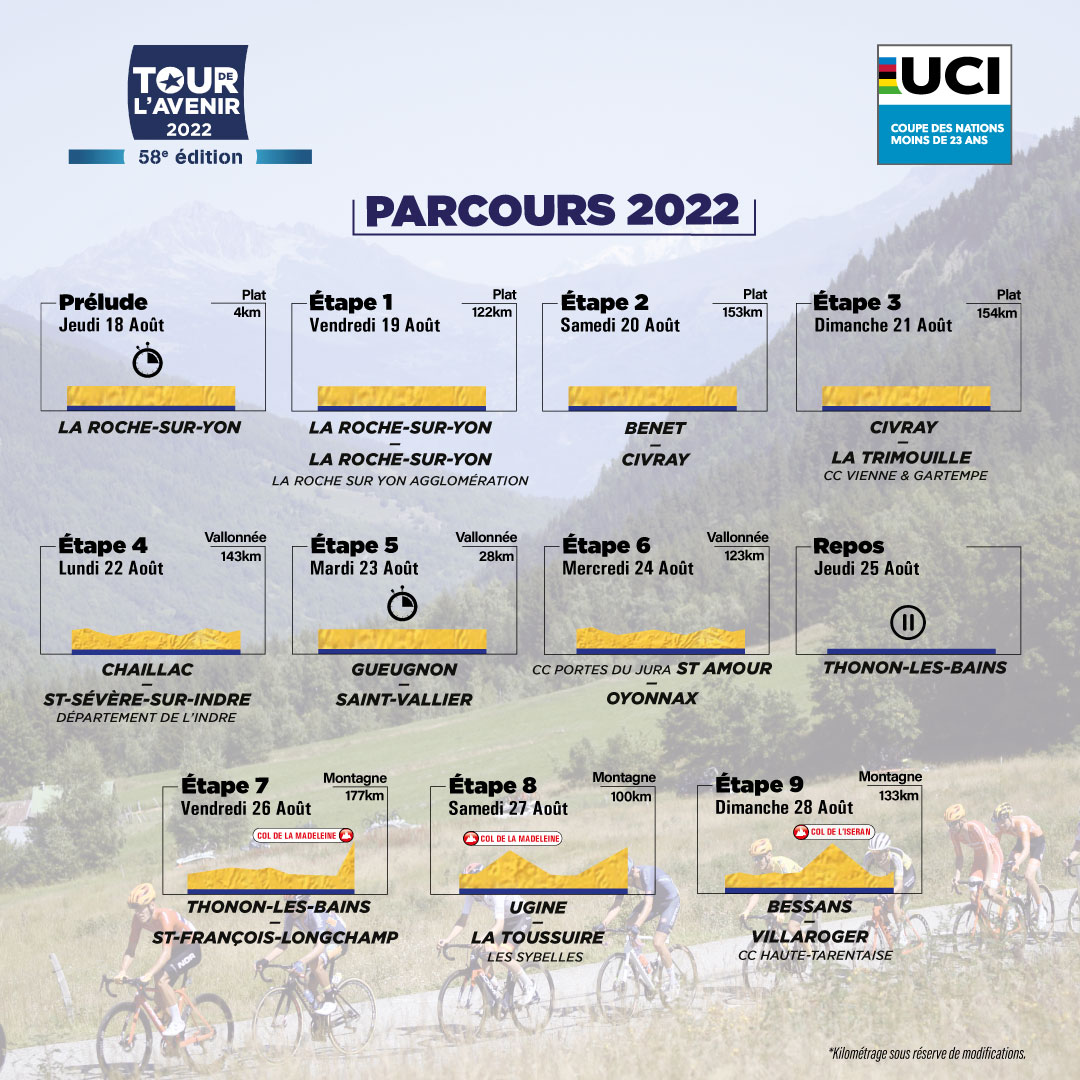 The six Australian teammates will be used to racing together. Three of them contested last year’s Tour de l’Avenir, and five of the six competed at the Course de la Paix GP Jeseníky in June, which was the last outing for Australia’s under-23 team.

Matthew Dinham was Australia’s highest-placed finisher last year in 12th overall. The climbing all-rounder, whose background is in cross-country mountain bike, will race with general classification goals and an extra year’s experience under his belt.

Also looking forward to the mountains will be 2021 Grafton to Inverell winner Rudy Porter, who recently finished third overall at Course de la Paix. The Victorian has secured a neo-pro contract with Team BikeExchange-Jayco, but will return to the Tour de l’Avenir with unfinished business after pulling out with illness in 2021.

For the flatter stages, the Australian squad brings multiple options.

Fast-finishing Jensen Plowright placed second on a stage last year before succumbing to illness. Like Dinham, he, too, has enjoyed another 12 months of European racing experience and has just signed his first pro contract with Alpecin-Deceuninck.

Under-23 national road champion Blake Quick will race his first Tour de l’Avenir. He was arguably the fastest sprinter of the Australian summer, where he won the Bay Crits and a stage of the Santos Festival of Cycling.

At just 19 years of age, Sydney’s Dylan George will soak in the experience of taking on a race of this level. He’ll also enjoy the opening 4-kilometre prologue, having scored his first UCI-level podium on a similar stage in June.

Rounding out the team is 20-year-old Canberran Dylan Hopkins, who’s been gaining European racing experience with Ljubljana Gusto Santic since 2020, most recently lining up against Pogačar at the Tour of Slovenia.

“It's always special to represent Australia and I'm looking forward to pulling on the green and gold stripes,” said Dinham.

“I've also raced with a lot of the guys on the team before and we have a great team atmosphere, so it will be great to catch up and get stuck into the racing.

Dinham said he’ll use his experience from last year’s race to aim for better results for himself and in service of his Australian teammates.

“The Tour de l'Avenir is always a race of attrition and personally, I'm looking forward to targeting the final days in the mountains,” Dinham said.

“In the early parts of the race where the terrain suits Jensen and Blake more, I'll be doing my best to help them and I'm sure as a team we can be successful.”

Likewise, Plowright believes having another year under his belt will serve him well.

“I know what it takes to win here, and I think we are going into this year with a team that knows the chaos and can challenge for the win on every stage.”

Rory Sutherland, the Australian Cycling Team’s Elite Road Coordinator, said the event is an important chance for young riders to show their abilities to an international cycling audience.

“I’m really happy we’re able to help these next-generation athletes be ‘seen’ and hopefully springboard them into professional contracts in the future,” Sutherland said.

“For me, nurturing them and providing opportunities is one of the most rewarding parts of the job.

“Thanks to all at AusCycling for helping this process, and let’s get behind our under-23 men in France.”

The first seven stages of the 2022 Tour de l’Avenir will be broadcast on the event's website and YouTube channel.

You can then can watch the final stages on Eurosposrt and GCN+.