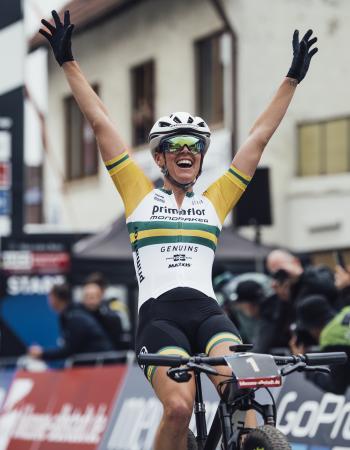 Rebecca McConnell first took up mountain biking when she was 11 years old joining the Canberra Off Road Cycling Club, which has seen her go from competing at local club races to a World Championship podium.

The Canberra local has dominated the Australian XCO scene over the past decade having claimed the Elite Women National Championship title eight years in a row and has a total of 14 Australian titles, including a National Marathon Championships.

Rebecca has competed at three Olympic Games, her first being in the 2012 London Games as well as two Commonwealth Games with a Bronze in Glasgow her best result.

The majority of the Canberra rider’s success has come at the UCI MTB World Cup and World Championships.

Her first international podium came at the 2013 World Cup in Albstadt, Germany where she won the Under 23 XCO race.

Rebecca's first XCO World Cup win came in the first race of the 2022 season at Brazil, before she then went on to complete a race XCC and XCO double at the second round in Albstadt, Germany.